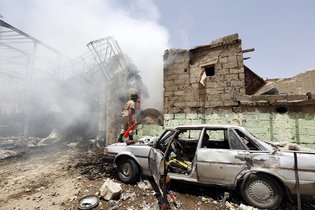 Saudi Arabia’s military intervention in Yemen’s civil war was always a risky gamble. Now there’s evidence showing just how damaging four weeks of airstrikes have been: more than 1,000 civilians killed, more than 4,000 wounded, and 150,000 displaced. Meanwhile, the fighting and a Saudi-led blockade have deprived Yemenis of food, fuel, water and medicines, causing what a Red Cross official called a humanitarian catastrophe. Yemen has long been a weak state, and with each day it draws closer to collapse.

The Saudis claim the airstrikes have punished the Houthi rebels, who have tried to take over Yemen, by wiping out many of their weapons and military installations around the country. But the rebels, who are supported by Shiite Iran, are still on the march. The Saudis, who lead a coalition of Sunni Arab nations, are nowhere near to restoring the Yemeni president, Abdu Rabbu Mansour Hadi. Mr. Hadi was ousted by the Houthis in January and driven into exile in Saudi Arabia.

The Obama administration has helped the Saudis with intelligence and tactical advice and by deploying warships off the Yemeni coast. Now it is wisely urging them to end the bombing. The White House seems to have realized that the Saudis appear to have no credible strategy for achieving their political goals, or even managing their intervention. On Tuesday, they declared a halt to most military operations, only to resume bombing hours later. More airstrikes followed on Thursday as warplanes from the coalition struck Houthi targets around the Yemeni cities of Aden and Ibb.

The Sunnis constitute a majority in Yemen. Saudi Arabia and other Sunni countries intervened because they feared that a Houthi takeover would extend the influence of Iran, which also has footholds in Lebanon, Syria and Iraq. That fear appears to be exaggerated in Yemen. Nevertheless, the intervention has threatened to turn what has been a civil war between competing branches of Islam into a wider regional struggle involving Iran.

Saudi Arabia has been further unnerved by the possibility of a nuclear deal involving the United States, other major powers and Iran. Such a deal, it fears, would help make Iran the dominant regional power and spur reconciliation with the United States, thus putting Saudi Arabia’s security relationship with Washington in jeopardy. This has left American policy makers with a formidable diplomatic challenge: reassuring the Sunni nations of continued support while trying to see if Iran, an adversary since 1979, could be nudged into a more productive relationship.

The deployment of the U.S.S. Theodore Roosevelt aircraft carrier and other warships to the Arabian Sea this week was intended as proof of that reassurance. American officials said they were prepared to intercept a nine-ship Iranian convoy headed for Yemen and believed to be carrying weapons for the rebels. Fortunately, the Iranian vessels turned around, avoiding a possible confrontation.

The fighting needs to end, relief supplies need to be delivered quickly and a political dialogue needs to be restarted. Before the outbreak of the Houthi offensive, a United Nations-led diplomatic initiative had made some progress, but the Security Council never gave it enough support and attention. And now, the United Nations official who led the negotiations, Jamal Benomar, a Moroccan diplomat, has resigned and returned to New York.

Finding a political solution will not be easy; it may not even be possible. For one thing, it will require Saudi Arabia to accept the Houthis, an indigenous Yemeni group, as part of the governing power structure. But such a solution is the only hope for bringing some stability to the country and refocusing international and Yemeni resources on Al Qaeda in the Arabian Peninsula, the most lethal Al Qaeda affiliate, which is the real beneficiary of the widening chaos.