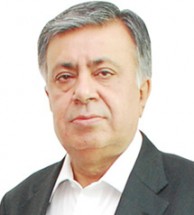 Samuel Johnson, literary titan of the 18th century, once famously said: patriotism is the last refuge of a scoundrel.

I was reminded of the famous quote while reading allegations against Shoaib Ahmed Shaikh, the beleaguered Chief Executive of Axact, the IT company about to launch by his own claim, “Pakistan’s largest media group BOL”. According to Shaikh, Declan Walsh, the NYT reporter who exposed the multi-million dollar scam, had his own axe to grind. He is bent upon besmirching Pakistan, Shaikh claims.

Mr Walsh was expelled from Pakistan in May 2013, on the eve of the general elections. It happened while I was Caretaker Federal Information Minister. So I know a little bit about it.

I recall quite vividly that Mr Walsh came to see me at my office on May 9, 2013. He informed me that through a letter from the Interior Ministry his visa, valid till January 2104, had been cancelled citing “undesirable activities”, and that he had been asked to leave the country within 72 hours.

On inquiring from the Interior Minister I was plainly told that those who matter in Pakistan had expelled Mr Walsh and the Interior Ministry was just a post office. Nonetheless, despite my best efforts, Walsh was detained at his hotel in Lahore by security officials on Election Day, and was thrown out the next morning.

I was told that Walsh had surreptitiously travelled to Balochistan, which was a no go area even for the foreign journalists based in Islamabad. The NYT bureau chief had filed a story titled “Pakistan’s Secret Dirty War” alleging human rights abuses in Balochistan and the plight of the missing persons. Previously, he had filed a story on Kamra Aeronautical Complex harbouring nuclear missiles. The story turned out to be a canard.

Walsh, although London based, is still bureau chief for Pakistan. Mr Shaikh spuriously claims that Walsh’s story was a foreign conspiracy against Pakistan.

It never pays for the host country to expel journalists except in extreme cases. Journalists are human beings as well who can hold biases. It just might be, as has been termed by some, “the revenge” of Declan Walsh.

But in this case as a professional he has done a thorough job. The story is well researched, documented and multi-sourced. It is not like Seymour Hersh’s unsubstantiated last hurrah about the Pakistani military being complicit with the US Navy SEALs in Abbottabad operation to kill Osama bin Laden in May 2011.

BOL, soon to be launched with much fanfare, is now in doldrums. According to its management test transmission will start in the holy month of Ramzan. That is only few weeks away.

Despite the obvious bravado of its CEO the sheen from yet to be launched multi-million dollar media empire has worn off. The fake degrees scam allegedly perpetrated by its parent company Axact is too widespread and well documented to be swept under the carpet even by Pakistani authorities infamous for stonewalling bigger crimes.

It is a fact that those conned or blackmailed into spending thousands of dollars on fake degrees are not entirely blameless. But that does not exonerate the so-called IT company of its culpability. After all Bernard “Bernie” Madoff, who through his Ponzi scheme perpetrated the largest financial fraud in US history, was robbing mostly rich Jews of their life savings.

BOL offers its journalists and their families from cradle to grave security. It was supposed to be a paradise for its employees. Like their former owners they were also entitled to fat salaries, perks and privileges including owning own luxury cars, in many cases bulletproof.

BOL, for the time being, has delivered on its tall claims. But these fat salary packages simply do not make economic sense. The kind of packages given to some of the famous faces poached from rival media houses exceed even a crore rupees a month.

Shaikh, in some of his speeches available on social media, sounds like a modern day Robin Hood. In one of his erudite addresses he is seen taunting the “selfish corrupt and greedy owners”. In the audience there are most of those who have already joined the media conglomerate, but there are a few known faces still with other channels clapping approvingly.

The most worrisome aspect of the Axact/BOL saga is that the figures simply do not add up (they never did). But the bubble has now burst. Even if the government takes a lenient view of the matter, the Ponzi scheme of selling fake degrees can no longer be sustained on our soil with impunity.

The matter affects thousands of persons all over the world, including American citizens and Indians. International laws have been violated. The forgeries involved go right up to the doors of US State Department.

True, rival media houses are having a field day. And why shouldn’t they? It’s their bread and butter that are at stake.

Despite some of the media houses having deep pockets, it is simply impossible for them to match the salaries and perks and privileges being offered to their stars and general staff by BOL. As a media person myself who has launched two newspapers and a television station, it simply does not fit in any business model worth the name.

Hence Declan Walsh’s disclosures have only confirmed what media insiders knew for a long time. Some believed that the ubiquitous establishment was behind the launch of BOL to get even with GEO/Jang Group. Even the name of Dawood Ibrahim, the Bombay based don who now, according to some reports, lives in Karachi, was thrown in as the hidden hand bankrolling BOL.

Perhaps initially Walsh’s natural bias against the ISI might have prompted him to dig the Axact/BOL story. But in the end analysis he stumbled onto a trove of illegal activities based on deception and fraud. Unfortunately, those who had expected the pervasive hand of the deep state were sorely disappointed.

In the meanwhile, the fate of BOL hangs in limbo. It’s not known whether the channel will be launched at all. Possibly it will be. But sources of its funding, mainly from its so called IT business, drying up, it will be difficult if not virtually impossible to sustain its profligate business model.

As it is, amongst 80 plus news and current affairs channels those who make any money can be counted on fingertips. Private and government advertisement — their sole source of income — can hardly sustain them.

The rich and famous anchors that were not exactly underpaid even before joining the BOL bandwagon will be mostly welcomed to their previous sinecures. The real axe will fall on the lower and mid level professionals.