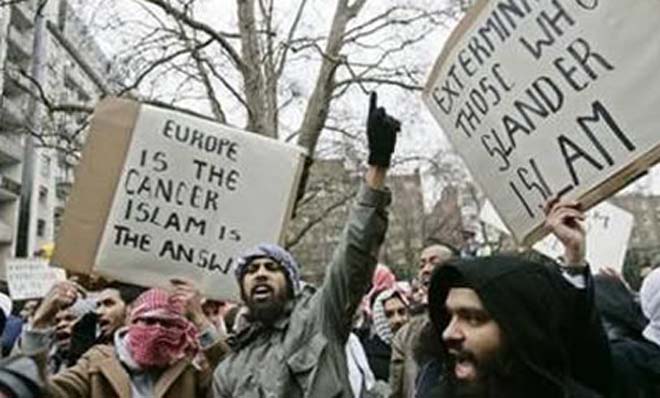 The shooting at Charlie Hebdo in Paris has acted as a wake-up call for several European nations, Belgium and the United Kingdom being the most conspicuous of them. Their concern seems all the more visible primarily because Western powers (read state establishments and academia) have yet to find any plausible way to grapple with the issues posed by militant Islam. Their disquiet is compounded by the fact that Islamic extremism has permeated quite deeply into these societies.

However, their Islamic extremism is markedly different. It is embedded in a Western intellectual tradition, which makes it distinct from South Asian (Deobandi or Barelvi) or Saudi Arabian (Salafi) brands of Islam. That is despite the fact that Deobandi madrassas have mushroomed in the UK in the last couple of decades, as have Salafi seminaries. Many seekers of higher Islamic instruction have been going to Medinah University but, as a Cambridge scholar Hira Amin asserts, they have returned with an entirely different understanding of the religion.

Thus, the gradual process of Islam striking indigenous roots seems to have begun.

The notion of an ‘open society’, propounded by Karl Popper, which implied that it would surely be working as a bulwark against religious extremism of any sort, now rests on faltering foundations. In these open societies of the West, Islamic extremism has found both an intellectual rationale and motivation. It is because competing (rational) intellectual streams of thought keep on interrogating the medieval rational ethos of religions, including Islam, which prompts and impels Muslim laity of these open societies to constantly reinvent the intellectual impulse that underpins their religion.

It is a dialogical process that can happen only in societies where multiple ideas exist concurrently and run their respective course.

Despite claims of sustaining a pristine nature, Islam has continually changed to meet the exigencies of new phenomena. One may argue that the re-invented form of discursive Islam could take centre-stage by displacing its medieval roots, which have their basis in a madrassa system still stuck in the anachronistic curriculum of Dars-i-Nizami. Among the Muslim educated youth, American scholars such as Nouman Ali Khan, Yasir Qadhi, Abdul Nasir Jangda and Abu Eesa Niamatullah and modernists like Khaled Abu Fadl, Tariq Ramadan, Omid Safi or Amina Wadud (who was the first woman prayer leader in Oxford) have found immense popularity. Gradually they, it seems, are moving to take over the mainstream discourse on Islam from the madrassa-oriented ulema.

But how are these two streams going to negotiate with each other? To what extent will the madrassa system hold its ground vis-à-vis the fast-emerging version of Islam which has Western open societies as its epicentre? These are pertinent questions with no definitive answers at the moment.

However, the trend and trajectory that Islam is likely to absorb in the not-so-distant future points westwards.

Until now the projected ethos of the ‘open’ societies — the freedom to think, act and express openly — have failed to find traction, even among Muslims who have lived there for a considerable period of time. Anjem Chaudhary is one of them. Currently, he is incarcerated because of his extremist views.

In educational institutions in London and other parts of the UK, one can see Muslim youth underscoring their Islamic identity against those opting for Western (liberal) ideals. Youngsters who are extremely motivated and consider Islam as their sole marker of identity are managing Islamic societies. Some Muslim youngsters who fail to take a definitive position are confronted with either/or situation.

Apparently, the evolutionary process which Islam seems to have undergone, despite its emphasis on being a complete code of life and so not open to any mutation, and the rationality practised in the ‘open’ societies, might encounter a formidable challenge in the shape of an Islam with its intellectual core re-invented through Western intellect.

Several state establishments, including the UK, have now become cognisant of the imminent danger posed to what some people call ‘their way of life’. Therefore a letter addressed to British Muslim faith leaders has been circulated. Written by Eric Pickles, the Secretary of State of the Department for Communities and Local Government, it urges the faith leaders to explain and demonstrate, to young Muslims how faith in Islam can be a part of British identity. The letter has incurred varied response. Some responses are quite sharp and acerbic whereas some are measured and contemplative. What has been urged is the conflation of Islam and British values that obviously foreground liberal exchange of ideas.

That letter further says, “There is a need to lay out more clearly than ever before what being a British Muslim means today: proud of your faith and proud of your country.”

Regarding youth, who are vulnerable to the message of Islamic extremism, an important message which this letter contains is, “We must show them that there are other ways to express disagreement: that their right to do so is dependent on the very freedoms that extremists seek to destroy”.

Now the contentious thing with respect to Islam is that in any public sphere where open exchange of ideas takes place, the organised classical religion can hardly hold its ground. The only way it can sustain itself will be by altering its organisational structure as well as its intellectual content.

One hopes this transpires one day — because Muslim intelligentsia based in Western academic institutions have come forward to represent Islam which will be in consonance with the changing exigencies of time.

The time ahead is likely to be difficult because the synthesis between Islam and Western ethos is quite daunting and difficult but things are gradually moving in that direction.