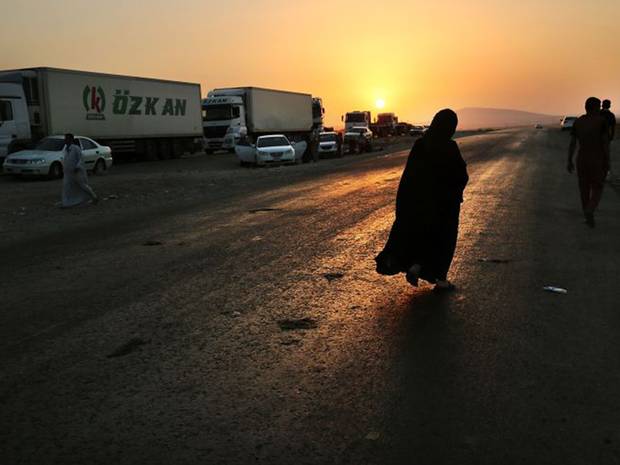 On the day Ibrahim fled his home city of Fallujah, crowds were gathering to witness the execution of two women who had refused to marry Islamic State (Isis) militants. A 49-year-old Sunni Arab, he says he was shocked “because I knew that those women were Sunnis from the country neighbourhood of Fallujah”.

It was the vulnerability of his two daughters, aged 21 and 23, to “temporary marriage” with Isis commanders, fighters and militants that led Ibrahim, which is not his real name, to leave Fallujah two months ago for Baghdad 40 miles away and later to seek refuge in Iraqi Kurdistan. He told The Independent on Sunday in an interview that the threat to his daughters was the culmination of friction between him and members of Isis who captured the Sunni Arab city with a population of 200,000, in January of 2014.

Ibrahim says that Isis recently amended a “temporary marriage” order, extending it to civilians in peaceful areas and not just in war zones. Isis had previously enforced the “Jihad marriage” order, also known as the “Jihad al-Nikah”, in which jihad fighters have the right to take women, including minors, as captives and marry them for a short time, which might be one day or even a few hours. The order also gives the jihadists the right to marry more than one woman.

Ibrahim says that following this new order, an Isis militant “started to vex and harass my daughters and follow them when they went to the bazaar”. He continues: “One day, my elder daughter returned home terrified because a man was following her. After a while, he knocked on the door and asked to marry her, but I refused. Then he threatened to take her compulsorily and assured me that he was legally allowed to do so.” Ibrahim immediately sent his daughters to Baghdad and followed them the next day.

The change for the worse in the status of women has been one of the main developments within territory controlled by Isis since it started expanding its rule in 2012. In an interview published in The Independent earlier this year, an Isis fighter who gave his name as Hamza, also from Fallujah, recalled speaking to Tunisian Muslim women who had made their way voluntarily to Isis because they supported its beliefs and aims, and who had undergone “temporary marriages” with Isis commanders. The Tunisians would then be divorced after a week and would marry another commander. By way of contrast, captured women from the Yazidi sect were regarded by Isis as pagans without rights and were offered to fighters for sex.

“It was in the first week of December 2014 when they brought about 13 Yazidi girls to us,” Hamza says. “The commander tried to tempt us by saying that this is halal [lawful] for you, a gift from Allah that we are allowed to satisfy ourselves without even marrying them because they are pagans.” Hamza regarded this as rape and, together with fear that he would be asked to take part in executions, led to his disillusionment with Isis and flight from Fallujah.

Greater and more restrictions are being placed on women (Reuters)

Ibrahim paints a fascinating picture of life in Fallujah before he left, showing how even conservative tribal Sunni Arabs are at risk of being denounced for disloyalty or for resisting the diktats of Isis. He says that friction between him and the militants had nothing to do originally with his daughters, but was over money owed to him. He explains that before Isis arrived in Fallujah, “I had some problems with my countrymen relating to debts. I taught their children private lessons, but because some of them didn’t pass their exams, their parents refused to pay for the lessons”.

Ibrahim lodged a complaint with the police over the debts, so the parents of his failed students were detained several times by police in Fallujah investigating the matter. “But in our culture it is an insult when somebody is called in by the police,” explains Ibrahim, adding that what made this worse was that he and the people against whom he had made a complaint came from different tribes.

But when Isis occupied Fallujah, he discovered that some of those with whom he was having this long-running disagreement “were sleeper agents for Daesh [the usual name in Iraq and Syria for Isis and its predecessor organisation]”. They began to persecute him and create problems for him, culminating in the threat to his daughters of compulsory marriage.

From an early stage in its resurgence over the past four years, Isis has enforced increasingly onerous rules regulating the lives and behaviour of women. These are often outlandish and far beyond Sharia. The Sunni Arabs of western Iraq and eastern Syria are conservative, but women had not previously been compelled to wear the niqab covering the whole face. Isis has ruthlessly enforced a regulation that women below a certain age cannot leave their home without being accompanied by a male relative. If they do so and are detected, they are taken back to their house by Isis officials or fighters and their husband or father is given between 40 and 80 lashes.

Yazidis have been forced to flee their homes (Reuters)

At first, Isis rules were more loosely enforced in order not to alienate local people before the movement gained total control. Many administrative documents issued by Isis and collected and translated by Aymenn al-Tamimi now form part of an online archive which gives an invaluable insight into Isis workings and beliefs. An early regulation about restrictions on women’s clothing in Tel Abyad in northern Syria, issued in December 2013, spells out what is required. It says that “there will be a complete ban on unveiling, as well as the wearing of tight trousers and cloaks, and the adorning of oneself and imitation of kafir [disbelieving] women. And any woman who contravenes this… will expose herself to the severest consequences”.

On the question of whether both eyes and part of the cheek of a woman should be concealed, a fatwa orders that “it is necessary for her to cover her two eyes… with something delicate”. At times Isis prurience regarding anything to do with sex beggars belief. For instance, in February of this year, an announcement banned the keeping of pigeons above the roofs of houses with those who continue to do so threatened with fines, imprisonment and flogging. The reason for this is that pigeons “are harming one’s Muslim and Muslim women neighbours, revealing the genitals [of the pigeons]”.

The world of Isis, going by the regulations collected by Mr al-Tamimi, often varies markedly from other human societies because every aspect of religious, social and economic life is determined by its intolerant variant of Islam. There is a fatwa on the rights and wrongs of ransoming an “apostate” prisoner in exchange for money or as part of a prisoner exchange (answer: on the whole not). Numerous theologians, jurists and figures from Islamic history are quoted to support the ruling.

When schools were reopened in Isis-held parts of Aleppo last year, detailed instructions were sent to school heads on how this was to be done. Morning sessions were for girls and the afternoon for boys. Subjects no longer to be taught include “drawing and fine art, music, nationalism, French language, history, philosophy and social studies… The cancelled subjects are to be replaced with the following; aqeeda [creed], Koran, Hadith, Sira [life of Mohamed] fiqh [jurisprudence] and the name of PE will be replaced by jihadi training”.

Many orders are more mundane and are to do with the orderly running of the new state, including, for example, instructions on setting up kindergartens and the proper regulation of the club scouts. Prices are set for everything from the sale of vegetables in the markets to Caesarean operations in hospitals. Certain games such as billiards and table football are allowed, but under strict conditions. Car owners are told that they must carry tool kits including a spare tyre or face punishment. Overall, the impression comes across that Isis and the society it wants to create is solidly based on a conviction that its leaders what is right and wrong in all circumstances.

In this society, which is effectively a cult that believes it has a monopoly of truth and demands total loyalty, it is dangerous to disagree with authority or often fatal to be labelled as an “apostate” or heretic. These risks are highlighted by Akram Ghanem, a 51-year-old member of the Shabak minority from Hamdaniyah, a town just outside Mosul, who spoke to The Independent on Sunday. The Shabak are a small community combining Islam and Christianity, but whose Islamic beliefs are mostly drawn from the Shia tradition and as such are condemned by Isis. Knowing this, Mr Ghanem, who has two wives, one Shabak and one Sunni, wisely ran away to Irbil with 300 other families when Isis took over his town in August.

In Mosul he left behind his Sunni wife and their 20-year-old son who worked in a dyeing workshop and had quarrelled with some boys who were working in a shop nearby. These boys went to the new Isis authorities and complained that there was “a Shia boy fighting with Sunni people and making problems in the neighbourhood”. Mr Ghanem recalls sorrowfully that “my son Mohannad was taken to a juvenile offenders’ prison and held there for two weeks”. He was still there when the prison was hit by a US air strike and he was killed along with many others. Much though he detests Isis, Mr Ghanem says he fears that it can never be defeated because it appeals to too many ignorant people.