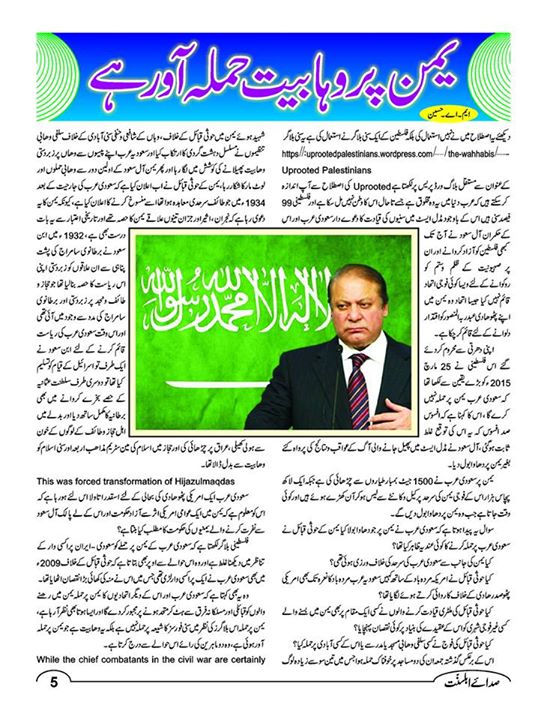 ISLAMABAD — Yielding to pressure from staunch ally Saudi Arabia, Pakistan has agreed to help an Arab military coalition enforce an arms embargo against Houthi rebels in Yemen and is expected to announce the deployment of navy warships to the busy commercial shipping lanes off Yemen’s coast.

In a statement posted late Thursday, the office of Prime Minister Nawaz Sharif said a high-powered Pakistani delegation had “affirmed to the Saudi leadership that Pakistan would fully participate and contribute to the implementation” of the arms embargo, which was set in place Wednesday by a United Nations Security Council resolution.

The U.N. Security Council approved the resolution, proposed by Qatar, a member of the Saudi-led coalition, after Russia, an ally of Iran in Middle East politics, abstained.

The Pakistani army chief of staff, Gen. Raheel Sharif, is also expected to travel to Saudi Arabia soon for consultations. He’s not related to the prime minister.

Pakistan still is declining a Saudi request to contribute ground forces and attack aircraft to the Saudi-led coalition of 10 Arab nations and has not drawn up any contingencies to deploy ground troops or warplanes to Saudi Arabia, according to sources in the army’s military operations directorate, who spoke on condition of anonymity because they were disclosing classified information.

Pakistan’s Parliament voted unanimously a week ago to remain neutral in the Yemen conflict. But the resolution gave the government leeway by authorizing it to commit forces in the event Saudi Arabia’s territory came under threat.

The resolution shocked Saudi Arabia, which was so confident that Pakistan would join the Arab military coalition that it had displayed Pakistan’s flag at its press briefing center in Riyadh, the Saudi capital.

The unusual departure from diplomatic protocol reflected Pakistan’s desire to soothe Saudi anger at Pakistan’s refusal to actively participate in the Yemen conflict.

It also reflected the family’s debt to the Saudi ruling family, which saved Nawaz Sharif from possible execution after he was overthrown by the military in October 1999. Intervention by Riyadh persuaded the junta’s leader, Gen. Pervez Musharraf, to allow the Sharif brothers to live in exile in the kingdom.

Pakistan’s naval contribution to the arms embargo against Houthi rebels in Yemen is an easy option, because two warships already are deployed in Indian Ocean waters near Yemen as part of multinational task forces patrolling the area to interdict al Qaida in the Arabian Peninsula militants and pirates based in the Horn of Africa.

But further involvement is opposed by Gen. Sharif, the army chief of staff, who’s reluctant to deploy troops in the kingdom, even for a proposed joint military exercise discussed by the Saudi and Egyptian governments this week. Pakistan has never deployed warplanes in support of overseas operations, said the sources in the army’s military operation directorate.

Egypt, which operates the largest army in the Arab coalition, also has not sent ground forces to Saudi Arabia. Gen. Sharif met with Gen. Sedki Sobhi Sayed, Egypt’s defense minister and armed forces commander in chief, in Islamabad on April 8 to discuss the crisis in Yemen.

Pakistan’s reluctance to join the Arab coalition is also because, in part, of concerns it would antagonize the sizable number of Shiite officers serving in Pakistan’s military, said editors of newspapers politically aligned with the prime minister’s Pakistan Muslim League-Nawaz party.

Pakistani media reports have claimed Saudi Arabia’s request for Pakistani forces in support of the campaign in Yemen was nuanced by a demand that any Shiite Muslim soldiers be excluded.

“The reported Saudi request for sectarian screening of the troops would be upsetting to the armed forces, which have prided themselves on preserving themselves from this divide,” said Mohammed Afzal Niazi, executive editor of The Nation, an English-language daily newspaper politically aligned with the prime minister’s Pakistan Muslim League-Nawaz party.

Saudi Arabia’s suspicions toward Shiite Pakistani soldiers have strained relations in the past.

In 1982, Pakistan deployed 12,000 soldiers in the kingdom, which feared Iranian military reprisals for the Arab Persian Gulf monarchies’ support for Iraq during the Iran-Iraq war. They were withdrawn in 1987 after Islamabad refused to comply with Riyadh’s demand for a list of Shiite Pakistani army officers.