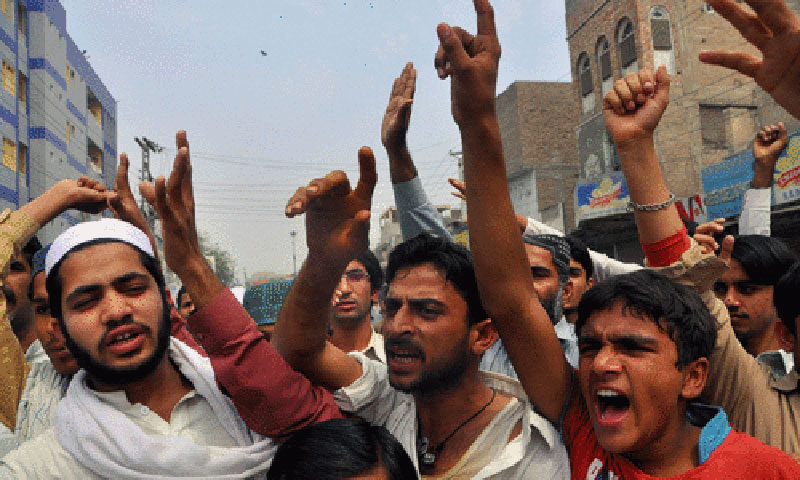 The lynching of a Christian couple in Kot Radha Kishan near Lahore has shocked Pakistanis and the rest of the world.

The despicable act is shocking indeed, yet hardly surprising in Pakistan where, like several other Muslim countries, mob violence has turned into a spectator sport.

A large mob numbering hundreds bludgeoned a Christian couple to death. The victims, Shama and Shehzad, were parents of three children, while Shama was four-months pregnant. The mob later burnt their bodies in the furnace of the brick kiln where the couple worked as bonded labour.

Lynch mobs and vigilante justice have not been the exclusive dominion of Muslims. While such heinous crimes do take place in other places, they are much more frequent in certain Muslim-majority countries.

Christians Hindus, and other minorities in Pakistan live in constant fear of their neighbours. The blasphemy laws in Pakistan, which mandate the death penalty for the convicted, have created an environment where the mere accusation of blasphemy guarantees a death sentence verdict either by the State or the society.

Unlike the rest of the world, some Muslim countries, especially Iran and Saudi Arabia, have turned state-sanctioned violence into a spectator sport.

Public beheadings in Saudi Arabia and hangings in Iran are performed in the presence of hundreds of onlookers. After China, Iran and Saudi Arabia lead the world in death sentences.

Earlier in Pakistan, General Ziaul Haq’s regime flogged journalists and other pro-democracy activists in public. Many believe such public portrayals of capital or other punishments are ordained in Islam. The fact remains that public beheadings and floggings are Arab customs that predate Islam.

The public hangings and executions are traumatic events, even for those who watch them. At the very least, such acts desensitise individuals and societies to violence. The central square in Swat under the Taliban was called the khooni chowk (bloody square) because the Taliban would hang dead bodies of their opponents in plain view of all. Children and others would pass by the hanging corpses as they walked to and from school.

Late General Ziaul Haq is indeed responsible for introducing the blasphemy laws and is rightly criticised for giving power to the religious fanatics who now are holding the nation hostage.

General Zia, however, has been dead for 26 years.

Why is that Pakistan has never moved to repeal the blasphemy laws?

Successive civil and military regime since General Zia’s death have paid lip service to protect the life, property, and rights of the minorities. They have though not attempted to repeal the laws that have informally institutionalised violence in the society.

It is important to note that lynch mobs and vigilante justice is not unique to Muslim-majority countries. It was not long ago that mobs in Gujrat, India, killed thousands of Muslims. In Africa, accused criminals are routinely lynched in Kenya. Lynching takes place even in Latin American countries.

What is then different about Pakistan or other Muslim-majority countries?

The answer is misplaced law and order and justice. Lynch mobs have gone scot-free in Pakistan even when the criminals were caught red handed on camera.

Last year, a large mob destroyed hundreds of homes belonging to Christians in Joseph Colony in Lahore after accusing a young Christian man of blasphemy. The accused Christian, Sawan Masih, has been sentenced to death by the courts for committing blasphemy. However, the mob, which destroyed the property and livelihoods of thousands of Christians, has escaped justice.

The blasphemy laws may have motivated some to murder those suspected of blasphemy. However, the failure of the State to prosecute the lynch mobs reinforces murderous behaviours in the society.

Shama, Shehzad, and Salman Taseer are citizens of Pakistan whose right to life was taken away by religiously motivated fanatics.

If the politicians in Pakistan are too timid to repeal blasphemy laws, they must at least then apply other existing laws to prosecute and convict lynch mobs.