Home  »  Newspaper Articles   »   Why is happiness a crime in Iran? – Murtaza Haider 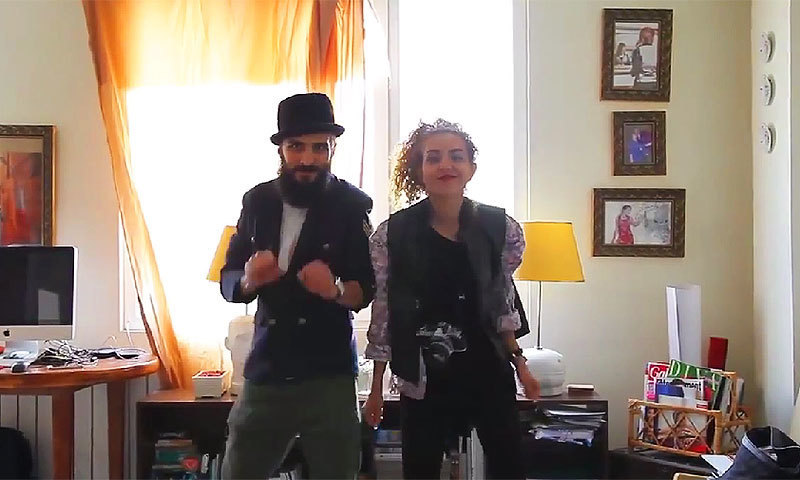 ‘It might seem crazy what I’m about to say;’ dancing with joy is a crime in Iran.

Seven Iranian students have recently received a suspended sentence of up to 12 months and 91 lashes each.

The video came to the attention of Iranian authorities in May who subsequently arrested the students and shamed them on national television for violating the Iranian laws that prohibit dancing and women appearing without headscarves.

How regressive these laws are, you ask.

Consider that a typical Pakistani wedding celebration would have the entire wedding party arrested if the Iranian laws were implemented in Pakistan.

A huge disconnect is obvious in Iran and Saudi Arabia where in the name of Islam varying degrees of orthodoxy is being enforced on the masses. The urbanised youth and the rural/small-town-based clergy in the Muslim world are in conflict on how one should live one’s life.

The more orthodox the regime, the more ridiculous are its proclamations; women are forbidden to drive in Saudi and prevented from singing in Iran. As the Muslim societies urbanise across the globe, rural-religious ethos will battle with the freedoms of urbanisation.

The Iranian video shows seven young students in Iran singing and dancing to the Happy song. They are fully clothed. Men are even bearded. There is no ‘inappropriate’ physical contact. They are acting not lewd, but silly. This does not even constitute a misdemeanor, let alone a crime with 91 lashes in punishment.

I have been to Iran once in the early 90s. There, I witnessed the conflict between the religiously inspired orthodox forces and the young urban Iranians. Couples walking in parks or at university campuses faced random interrogation and harassment by the moral police. In Mashhad, the youth would rather have a rendezvous at a shrine than a park to escape pestering by the police. This was not the Iran I had imagined.

I grew up in Pakistan listening to Googoosh’s man amadam. Those were the early days of the VCR and video cassettes of Iranian music and movies were in vogue in the Persian-speaking minority in Peshawar. I recall watching the modern face of Iran that looked millennia ahead of Pakistan. However, it all changed for the worse. A religious establishment, which made singing happy songs a crime, replaced the tyrannical regime of Raza Shah.

In 1993, I noticed that even after 14 years of revolution, war, and internal strife, Iranians had not lost their sense of humor. I watched a comedy Jib-Borha Be Behesht Nemiravand (pickpockets will not go to heaven), in a movie theatre in Tehran where the comedy began even before the movie started. Hanging from the walls in the movie theatre were large pictures of religious leaders. The movie was equally funny.

The master moviemaker, Jafar Panahi, was arrested for documenting the resistance movement in Iran. He received a six-year sentence. Mahnaz Mohammadi, a famous Iranian documentary maker, was recently jailed for five years for ‘collaborating with the BBC.’ Several other documentary makers were arrested in 2011 when the charges were first laid.

And more recently, Ghoncheh Ghavami, 25, was arrested as she tried to enter a stadium where the Iranian national men’s vollyeyball team was playing Italy on 20 June. She remains imprisoned three months on.

The BBC and other international news outlets remain banned in Iran. Several journalists are in jails for criticising the government. In 2003, Zahra Kazemi, a Canadian freelance photographer of Iranian origin, died in an Iranian prison during the investigation. A former Iranian military physician, who examined Zahra’s remains, confirmed that she was tortured to death. It should, therefore, not come as a surprise that the Committee to Protect Journalists ranked Iran the fifth most Internet censored country in the world. Saudi Arabia ranked fourth.

The urbanised Iran is as multifaceted, complex, and colourful as any other rapidly urbanising society could be. Young Iranians are falling in love, getting married, and if it does not work out, getting divorced. Asghar Farhadi captures the intricate social and domestic tensions of the modern-day Iran in the 2011 movie, A Separation. The movie shows the struggles of a young family in which the wife wants to leave Iran, while the husband, who also looks after his ailing father, does not.

A pregnant housekeeper (who may miscarry by accident) and the widening gulf between the dueling couple shows the ebb and flow of life in contemporary urban Iran that is too complex to be understood and appreciated by the religious police, who nostalgically craves a rural past.

Yet, it is not the police commissioner of Tehran, but Maryam Mirzakhani, who signifies the modern-day Iran. Professor Mirzakhani teaches at Stanford University and is the recipient of this year’s Fields Medal, which is considered the Nobel Prize in Mathematics. She is the first woman in 50 years to receive mathematics’ highest recognition.

The 37 years old Professor Mirzakhani, just like the seven students singing happy song, grew up in Tehran. Just like the girls in the video, she also does not don a headscarf. She made Iranians proud, even the conservative President, Hassan Rouhani, who felicitated her over twitter as he tweeted her scarf-free photograph.

The religious regime in Iran has to embrace urbanism and its byproducts: cultural and political freedoms. Any resistance will backfire.

President Rouhani recognises that the change is imminent.

When the students were initially arrested, he tweeted: “#happiness is our people’s right. We shouldn’t be too hard on behaviors caused by joy.”