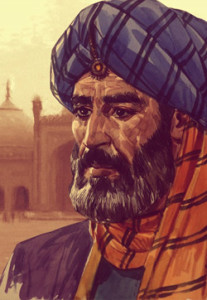 Sheikh Ibn Taymiyyah is a very controversial figure in Muslim history. On the one side there are those who believe that he adopted Imam Ahmad bin Hanbals’ rigid, violent and Zahiriya (emphasizing on outward appearance) in Tauheed (‘the oneness’) and went close to anthropomorphism. His view are said to be close to Khawarijis and in the field of Fiqh (Islamic Jurisprudence) close to Zahiriya of Ibn e Dawood. One the other hand some went to another extreme and declared Sheikh Ibne Taymiyyah as Sheikh al-Islam, mujadid (revivalist), restorer of Sunnah and terminator of biddah (innovation). They think of him as an unmatched expert of Tafseer and Islamic jurisprudence. The height of this can be seen in the views of Muhamamd bin Abdul Wahab Tamimi aka Sheikh Al-Wahabia o al-Najdia. He not only gave a new life to the thoughts of Sheikh Ibne Taymiyyah but also revived Zahiriya in the religion after a considerable time in history. He went beyond that and ended with more abstract concept of Tauheed. His attitude towards mysticism was very intolerant.

It is widely accepted that Wahabism also known as Salafism is based on the thoughts of Sheikh Ibn Taymiyyah. One of the important aspect of Sheikh Ibn Taymiyyah is that after Khawarijis he, for the first time, declared political opponents as infidels and disapproved their claim of being Muslim. He declared many Sufis from Horan, now in Lebanon, apostasies and did ‘Jihad’ against them. He fought with Sufis and followers of Sheikh Ibn Arabi. You need to read his letters during his jail time in Egypt to know the extent of role Sheikh Ibn Taymiyyah has played in the excommunication of Muslims.

Elements of extremism and knowledge both exist in his thoughts. This contradiction of personality and thought can also be seen in his pupils. For example if you look at Hafiz Abdul Hadi, like Ibn Taymiyyah, he remained stick to the idea of Salaf-e-Saliheen (pious predecessors) and to total rejection of common dealings in the Ummat (Islamic Nation). Hafiz Ibn -ul- Qayyim took a moderate path, and Abul Fida Ismail ibn Umar ibn Katir does not follow trait of Ibn Taymiyyah.

Among Sunnis Muslim Ash’aris and Maturidis as well as prominent leader of Four Schools did not borrow from Ibn Taymiyyah and considered his mode in beliefs careless and his source as indecorum. These include, in particular, view on pilgrimage to graves, recourse, conveyance of reward, beseeching help other than Allah, intent to pilgrimage to the grave of the Prophet, Quranic verses that use ‘hand’ and ‘step’ in annexation with Allah. On rose over of the Throne (Istawa) his views were considered close to anthropomorphism. Particularly Shafis, Malkis and Hanfis kept their distance from him, Hanbli followers are also aloof. Maulana Hussain Ahmad Madni, Maulana Yusuf Banori and Mufti Shafi from Darul Uloom Deoband in these cases asserted that its Sheikh Ibn Taymiyyah’s singularity. Though they have a soft corner for Sheikh Ibn Taymiyyah, Muhammad bin Abdul Wahab and Shah Ismail Dehlvi, and remained vague on many issues. That is why among individuals associated with Darul Uloom Deoband emerged Mamatia, Tajseemia, leniency towards Wahabism, and the negation of prayer after Janaza (funeral prayer), beseeching and appealing for help other than Allah. Deoband tried to portray themselves as moderate- somewhere between Wahabism and mysticism. These are their theological basis.

One thing is certain, whoever alleged a Muslim of shirk (attributing a partner to Allah) and most of his/her beliefs as biddah and on these basis approved killing of Muslims was close to Sheikh Ibn Taymiyyah and he considered himself as his follower.

In today’s world Jihadi and militant movements, that emerged from Salafi and Deoband school of thoughts, acquire abet from thoughts of Sheikh Ibn Taymiyyah to excommunicate and as a result kill Muslims.

Interestingly Salafi scholars all over the world, including the ones from Saudi Arabia, do not deny that all excommunicatory groups, from Al-Qaida to Daish, are Salafis and consider Sheikh Ibn Taymiyyah and Muhammad bin Abdul Wahab their leader, but they are of the opinion that these groups have done exaggerations to the thoughts of their leader. In order to reject Wahabism followed by Daish Senior Ulema Council of Saudi Arabia is now trying hard to portray thoughts of Ibne Taymiyyah and Muhammad bin Abdul Wahab as moderate.

My case has grounds. The level of religiously fanaticism, violence, resilience and following Zahiriya first prevailed among Khwarij, then among followers of Ibn Taymiyyah and later on among followers of Wahabism, neo-Wahabists and neo-excommunicators and neo-Khwarij, lacks in other Islamic school of thoughts.

And when in Islamic history Khwarijs’ religious fanaticism, excommunication of Muslims, mistaken interpretation of verses of Quran and Hadith took blood, assets and dignity of Muslims, and rose the flag of Zahriya, even excommunicated the first forerunners [in the faith] among the Muhajireen and the Ansar, declared them apostasies and affirmed killing them as Jihad, then these were senior companions of the Prophet including the ‘city of knowledge’ Ali al Murtaza, ‘the righteous man’ Abdullah bin Abbas, ‘man of piety and abstinence’ Abdullah bin Umer, Abu Hurairah and Hazrat Saad ibn Abi Waqqas- the one from ‘The Ten Promised Paradise’- who advised to depart from rigidity, violence and thoughts of Khawarij. That is why companions of Prophet, particularly those who received direct knowledge from the Prophet and are referred in notable saying present in Sunni Islam’s’ The Six Authentic Books of Hadith. They are those who have been said to have authority to give instruction on beliefs, rules of inherence, interpretation of Quran and on beneficence and piousness. It’s very much clear. So I can claim that companions of the Prophet, who were among the first core of companions and were considered sea of knowledge, those who have advanced knowledge of the Book and were very intuitive and wise, did not follow fanaticism, rigidity and arrogance. They had true understanding of the religion Islam.

Allama Ibn Tayamyyah was a very learned person. His study was immense. He had a large data bank of Quranic interpretation, Islamic jurisprudence and Hadith. He was far ahead from many of his contemporaries in this regard. That cannot be denied. But his ability to clarify critical questions was not that good. And on interpretation and reason he was only a Zahiryia. Probably he was influenced by the uproars of the time that affected his thoughts severely. He was not able to conciliate neither with Saljuk establishment nor with forms and diversity that emerged with the intermixture of Arab other Asian cultures. In particular, it was difficult for him to accept cultural diversity that emerged with the influence of Ash’aris and Maturidis within Hanafi school of thought. And Bedouin prejudice subjugated him again and again.

( Translated by Rizwan Atta from Urdu )