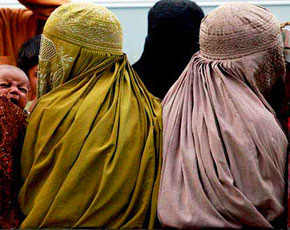 They all suffer in silence, but compared to the rest of Pakistan, women in Khyber Pakhtunkhwa (KPK) suffer domestic violence in greater proportions.

While terror-stricken Pakistan is focused on North Waziristan for a breakthrough with the violence sponsoring Taliban, domestic violence against women in general, and Pashtun women in particular, has been pushed on the backburner. A recent survey though exposes the extent of widespread domestic violence against women in Pakistan. Equally disturbing is the finding that Pashtun women are much more likely to be subjected to such violence than other women in Pakistan.

The violence-stricken KPK has been in the crosshairs of law enforcement agencies, policy makers, international NGOs, and other global religo-militant franchises. The lack of civilian oversight and control over the past six decades in the adjoining tribal areas of KPK has perpetuated a culture where weapons and gore have unnecessarily been glorified. Some weapon-friendly members of the community have been the preferred insurgents for the establishment for cross-border intrigues since 1948. While the State may have achieved short-term gains by sustaining a heightened sense of militancy among Pashtuns in KPK, however, this has come at great cost to the entire nation. But more importantly, the frequent victims of violence are the women in KPK, and in Balochistan, whose cries for help are muffled in the noise from the war on terror.

The recently released findings from the 2012-13 Pakistan Demographic and Health Survey*, which was conducted by various government agencies and funded by the USAID, sheds light on the living conditions of ever-married women between the ages of 15 and 49. The survey, a third of its kind in Pakistan, interviewed 13,558 women from a random and nationally representative sample of 14,000 households. A relatively smaller sample of ever-married men between the ages of 15 and 49 were also interviewed. The survey also collected information from a subsample of 3,687 women about domestic violence, which included several manifestation of physical aggression including “hitting, kicking, biting, shoving, restraining, slapping, or throwing objects” and other “sexual and emotional abuse, controlling or domineering behaviours, intimidation, stalking, and passive or covert abuse.” The survey paints a dismal picture of women’s welfare across Pakistan, but more so of the women in KPK and Balochistan.

According to the survey, one in five ever-married women aged between 15 and 49 years experienced physical violence in the 12 months prior to the survey. In addition, one in three women aged between 15 and 49 years suffered emotional or physical abuse from their husbands in the 12 months prior to the survey, 35 per cent of whom reported physical scarring. It gets worse. One in 10 women was subjected to violence while being pregnant. And worse of all, most women suffer in silence. The survey revealed that 52 per cent of women subjected to violence never sought help or shared their plight with others.

The differences in the prevalence of domestic violence across Pakistan are startling. Almost 59 per cent of rural women in KPK reported being subjected to physical abuse since they turned 15. The urban women in Sindh at 21 per cent were the least exposed to domestic violence. The sample size from Gilgit-Baltistan was too small for comparison with the rest of Pakistan. The physical violence against women by their spouses is often a result of various deep-rooted psychological and other behavioural challenges. Again, such troubling behaviours are more prevalent among men in KPK and Balochistan than in other parts of Pakistan. For instance, one in two women in KPK reported that their husbands would get angry or jealous if the women were to speak with other men. Only one in five women in Punjab and Sindh reported the same. Whereas 14 per cent of women in Punjab reported that their husbands wanted to keep track of them at all times, 30 per cent women in KPK and 32 per cent in Balochistan reported the same. Again, highly educated or wealthy women were the least likely to report controlling or insecure husbands.

Education for men was more instrumental where the level of violence reported by wives declined with the level of education of their husbands. One in three women married to illiterate men reported physical violence compared to 16 per cent of those married to men educated beyond secondary levels. However, women whose husbands were better educated were more likely to report physical violence than women whose education was similar to that of their husbands.

While these numbers may be shocking to some, however, they are not news to most in Pakistan. We, in Peshawar, discovered by chance that our tenant, a Pashtun from the tribal areas, had done hard time for murdering his sister’s husband with whom she had eloped against the family’s wishes. The widowed sister lived with her brother’s family in the rented space. And who can forget Samia Sarwar, a Pashtun woman, who was murdered in her lawyer’s office at her parents’ behest. Samia was trying to leave her husband, who she claimed was abusive, for another man. Equally reprehensible was Pakistan’s Senate’s response when Senators voted against a resolution tabled by Senator Iqbal Hyder condemning her murder and other so-called ‘honour killings’. Senator Israrullah Zehri from Balochistan and Senator Ajmal Khattak of ANP from KPK confronted Iqbal Hyder and insisted on defending murdering women in the name of honour.

KPK and Balochistan are also the epicentre of militant insurgencies in Pakistan. Is it the lack of education and development that causes domestic violence and contributes to militancy and terrorism, or is it that the acceptance of domestic violence against women in the name of culture creates environments where young men, from an early age, witness violence justified against those who cannot defend themselves as they grow-up believing such violent norms could be applied to their socio-political lives.

Dr Mubarik Ali, Pakistan’s foremost historian, has argued that tribal and feudal societies seldom recognise women rights. Often men in such societies resort to violence when women try to assert greater control over their lives. Children, especially males, raised in households that tolerate violence against women are often desensitized to violence. Such males may readily embrace violence than others.

It may be prudent for Pakistan to confront terrorism by addressing its root causes, one of which is the continued domestic violence against women. Protect mothers so that they can raise tolerant sons.