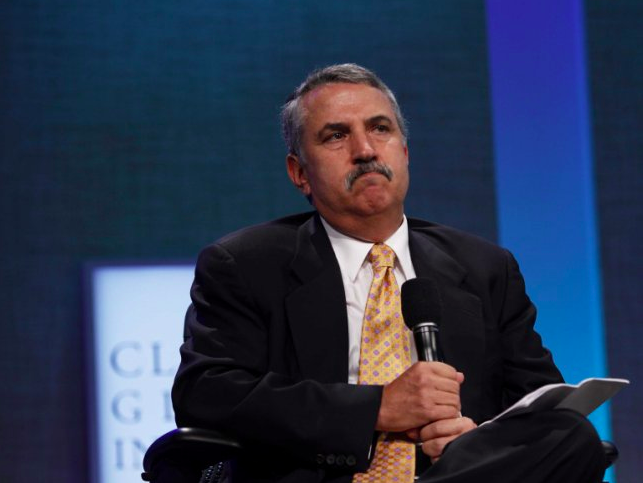 It is not just his selective, hypocritical and trite appropriation of other people’s bad ideas and analysis that endears Tom to the everyday douchebag. It his also the ability to switch comfortably between false humility and braggadocio while never veering too far away from being pompous that endears him to third rate journalists – and first rate morons.

He was one of the cheerleaders of the Invasion of Iraq and now he is coyly and obliquely suggesting the perverse idea of arming ISIS.

I could not pick a better image picture for Mr. Friedman than the one that came with this article. From his expression, it seems that Thomas Friedman has typically been masticating for too long on Saudi Riyals and is now trying hard to excrete his usual rational-sounding rubbish.

Tom, a little integrity fiber is urgently required for a healthy discourse.  Tom Friedman starring in Go Ahead, Ruin My Day.

Experts and journalists responded on Twitter with a quick answer: “no.”

In the column, Friedman explained that he wanted to “toss out” the question to stir up some debate.

The crux of his column is that he doesn’t think the US should keep putting itself on the same side of the fight as Iran. Friedman describes the Islamic State as “the last Sunni bulwark to a total Iranian takeover of Iraq.”

O.K., so we learn to live with Iran on the edge of a bomb, but shouldn’t we at least bomb the Islamic State to smithereens and help destroy this head-chopping menace? Now I despise ISIS as much as anyone, but let me just toss out a different question: Should we be arming ISIS? Or let me ask that differently: Why are we, for the third time since 9/11, fighting a war on behalf of Iran?

The Twitter reaction to Friedman’s column has been largely negative:

In the long list of insane Friedman columns, this one where he sees ISIS as bulwark agst Iran must rank in the top 5 http://t.co/j1i50Tom1K

Tom Friedman’s proposal that we explore arming ISIS is both weird and ignores the fact that we already did… http://t.co/v8uQfyK2K2

Friedman turns conventional wisdom on ISIS on its head, but it wrestles free and gives him a kick. Both tumble down: http://t.co/RT6hnQEod7

O my. Tom Friedman goes for contrarian on ISIS and misses wildly. http://t.co/YEfNIanzmz

Dear NYT editorialists. It’s been swell and all but it’s time to move on–> “Should we be arming ISIS?”: http://t.co/kqoFyQ9yq4