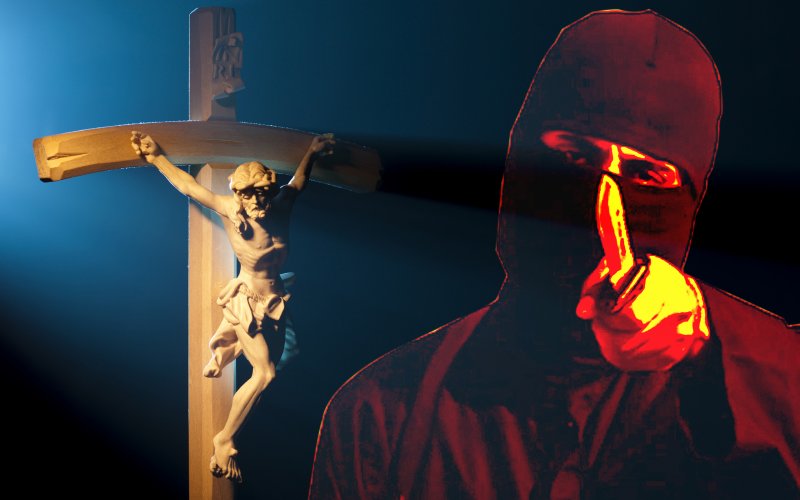 ISIS is using a harsh interpretation of a verse in the Quran to justify its attacks on Christians.

This week’s alleged kidnapping of 90 Syrian Christians sent shock waves around the world, but the young men of the Islamic State have been flagging for months now a simple idea: They follow an interpretation of Islam that blesses a 7th-century Quranic war strategy (9:5) to “capture and besiege” anyone who is a mushrikun, or “polytheist,” and Christians, in the world view of the Islamic State, fall into that category.

In gruesome video of 21 Egyptian Coptic Christians released last week, Arabic writing flashes over the image of the Christians in captivity (in 3:28 — 3:40 of the video), reading, “They call upon their God and die as al-mushrikun.”

The English translation by the Islamic State says: “They supplicate what they worship and die upon their paganism.” The Islamic State translates the al-mushrikun status of the Egyptian Christians as “paganism.”

But the brutal targeting of Christians highlights a deeper theological issue among Muslims: interpreting what qualifies as shirk, or the belief of equating any being with God. Various translations define shirk as “paganism,” “idolatry” and “polytheism,” and the people who practice shirk are mushrikun. It’s a historical reference to the pre-Islamic, polytheistic religious practices in 7th-century Mecca, before the prophet Muhammad started preaching belief in one God—tawhid in Arabic. The young men in the Islamic State propaganda videos flash a gang sign of one finger pointed skyward to represent monotheism, something ordinary Muslims also do.

Mushrikun is a slur word like “Witch!” during the Salem, Massachusetts, witch trials of 17th-century America. A Muslim detractor first called me a mushrikun in 2005 after I organized a mixed-gender Friday prayer led by a woman imam, or imama. It’s code for “enemy of Islam.”

The Quran (4:48) spells out that shirk is a “major sin,” stating: “And he who practices shirk has certainly fabricated a tremendous sin.” In one hadith, shirk is worse than murder. While most Muslims cast Christians and Jews as ahl-e-kitab, or “people of the book,” several elements of Christian practice—the deification of Christ, with belief in the “Father, the Son and the Holy Ghost,” the veneration of saints and the iconography of Mary and Jesus—make Christians a target for extremists like those in the Islamic State as mushrikun.

But for liberal Muslims, like me, who believe in the Quranic message, “There is no compulsion in religion,” shirk is actually the metaphorical sin of worshiping negative vices in this world, like violence and power. To others, from the government of Saudi Arabia to the Islamic State, it’s a lot more explicit: identifying everyone from Muslims in the minority Shia sect and the mystical Sufi tradition as mushrikun.

“Then when the sacred months have passed, then kill the mushrikun where you find them.”

The Wahhabi theology that Saudi Arabia exports to the world accuses Muslims of shirk if they are Shi’ites, visit the tombs of saints, celebrate the birthday of the prophet Muhammad or even follow astrology. Even ThinkProgress, a media website affiliated with the Center for American Progress, a Democratic-affiliated think tank that argues the Islamic State isn’t “Islamic,” acknowledges that the destruction of tombs by ISIS is a result of Islamic theology that regards tombs as shirk.

The destruction of artifacts in a museum in Mosul, documented in a new ISIS propaganda video released on Thursday, is also religiously motivated by a theology and war strategy of destroying any representations of alleged shirk. In the video, ISIS fighters took sledgehammers to physically behead statues, some dating back to the 7th century BC, much as Muslim invaders in ancient times ransacked India’s Hindu temples.

Militant Muslims like those in the Islamic State exploit a chapter (9:5) in the Quran, al Taubah, or “The Forgiveness,” which reads, in part: “Then when the sacred months”—the 1st, 7th, 11th, and 12th months of the Islamic calendar—“have passed, then kill the mushrikun where you find them, and capture them and besiege them, and lie in wait for them in each and every ambush.”

For most Muslims, while the verse is translated that way, the verse is read in a historical context for a time when the prophet Muhammad was in battle in Mecca with his Quraysh tribe and their allies, challenging their “pagan” traditions with his teachings of monotheism.

It’s also in this chapter that the Quran invokes Muslims to find “healing” in their hearts (9:14), or courage, to fight the mushrikun. The Islamic State translated the title of the immolation video of Jordanian Air Force pilot Lt. Muath al-Kasasbeh as “Healing the Believers Chests,” labeling the pilot a “crusader detainee.”

This harsh interpretation of shirk and mushrikun means the words of the al Taubah verse find their way into the most ominous of messages by militant groups, surfacing in “night letters,” or warning letters dropped by the Afghan Taliban. One night letter called on Afghans to oppose coalition forces in Afghanistan. It read: “Kill them wherever you find them. Those who give us information about the coalition forces, God will bless them.”

We had clues about the Islamic State’s targeted attacks on Christians in a slick ISIS recruitment video released last fall, “There is No Life Without Jihad,” by al Hayat Media Center, a propaganda wing of ISIS, featuring young men, brandishing machine guns and extolling their vision.

In the recruitment video, a young man, identified as “Brother Abu Muthanna al Yemeni—from Britain,” a “Mujahid in the Islamic State of Iraq and Sham,” speaks clear English, a scarf tried around his head to make a turban, a black flag planted behind him in a green, leafy clearing. He says (at 2:28 in the video), “A lot of people think it’s just to put this flag over their building,” and points with his thumb to the black flag behind him, like a prop.

“By Allah, it’s not that,” he says, waving his hand. “It’s about implementing the law of Allah.”

But he goes on to equate shirk with fitna, which means “conflict” or “discord” within the Muslim community, and which Islamic scholars of all persuasions say the Quran forbids.

For many of us, fitna and mushrikun are loaded words in Islam, meant to discredit, silence and even put a target on someone’s back, including another Muslim. I first heard the word fitna when I prayed behind the men at my local mosque in Morgantown, W.V., rather than in a secluded balcony. “Sister, you are causing fitna!” a man yelled at me.

The Islamic State has used its interpretation of shirk to put a “veneer of ideology and piety” on the kidnapping of women from another religious group, the Yazidi ethnic minority of Iraq and Syria, says a critique published by the Tony Blair Faith Foundation, a nonprofit group established by the former British prime minister.

In its fourth issue of the Islamic State’s magazine, Dabiq, “The Failed Crusade,” published last October, the Islamic State published an article, “The Revival of Slavery Before the Hour,” justifying its enslavement of women from the minority Yazidi ethnicity of Iraq and Syria, saying the Yazidi are “mushrikun.”

It argues the Quran commands the enslavement of the Yazidi, as the mushrikun were sold by the Companions,” of the prophet Muhammad in the 7th century. It further cites a hadith telling Muslims to restart slavery as a condition of end times.

The magazine title, Dabiq, itself is a reference to the city of Dabiq that will be captured in the realization of Islamic end times prophecy.

Since the 9/11 attacks, some Muslim organizations and leaders have promoted the idea that Christians, Jews, and Muslims are respected by Muslims as “people of the Book.” But sadly, translations of the Quran by the government of Saudi Arabia has fed hatred of Jews and Christians. A translation of the first chapter, al Fatiha, “The Opening,” by a moderate translator, Yousuf Ali, reads, “Show us the straight way, the way of those on whom Thou hast bestowed Thy Grace, those whose (portion) is not wrath, and who go not astray.”

What is interesting is that the first fitna in Islamic history is documented as a conflict by Muslims against Muslims. In 657, Islamic historians document the “first civil war,” at the Battle of Sifin, when a group of Muslims, called the Kharijites, or “those who break away,” started the practice of takfir, or declaring Muslims apostates. Today, ISIS is the most active practitioner of takfirism, which, ironically, is what is causing much of the discord within Islam and the wider world.

It’s critical for Muslim thought leaders to eliminate this politics of shirk from our communities, making it so that Muslims everywhere can live without judgment of other people for their beliefs and instead in peaceful coexistence. We most certainly have to reject the interpretations of the Quran that are used to sanction violence against mushrikun.