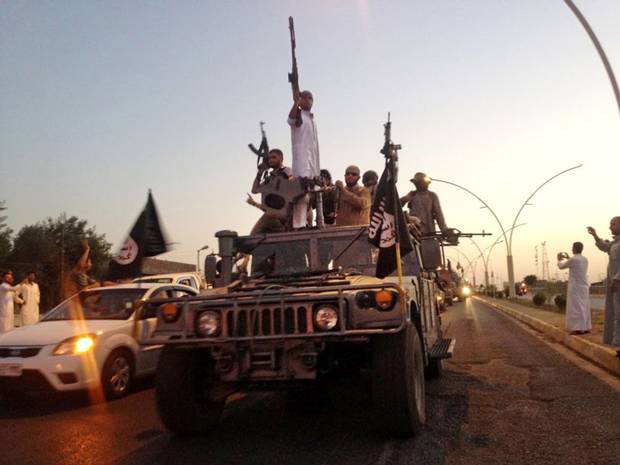 The US has being trying to stop such private donors in the Gulf oil states sending to Islamic State (Isis) funds that help pay the salaries of fighters who may number well over 100,000.

Fuad Hussein, the chief of staff of the Kurdish President, Massoud Barzani, told The Independent on Sunday: “There is sympathy for Da’esh [the Arabic acronym for IS, also known as Isis] in many Arab countries and this has translated into money – and that is a disaster.”  He pointed out that until recently financial aid was being given more or less openly by Gulf states to the opposition in Syria – but by now most of these rebel groups have been absorbed into IS and Jabhat al-Nusra, the al-Qaeda affiliate, so it is they “who now have the money and the weapons”.

Mr Hussein would not identify the states from which the funding for IS comes today, but implied that they were the same Gulf oil states that financed Sunni Arab rebels in Iraq and Syria in the past.

Dr Mahmoud Othman, a veteran member of the Iraqi Kurdish leadership who recently retired from the Iraqi parliament, said there was a misunderstanding as to why Gulf countries paid off IS. It is not only that donors are supporters of IS, but that the movement “gets money from the Arab countries because they are afraid of it”, he says. “Gulf countries give money to Da’esh so that it promises not to carry out operations on their territory.”

Iraqi leaders in Baghdad privately express similar suspicions that IS –  with a territory the size of Great Britain and a population of six million fighting a war on multiple fronts, from Aleppo to the Iranian border – could not be financially self-sufficient, given the calls on its limited resources.

Islamic State is doing everything it can to expand its military capacity, as the Iraqi Prime Minister, Haider al-Abadi, and the US Central Command (CentCom) threaten an offensive later this year to recapture Mosul. Regardless of the feasibility of this operation, IS forces are fighting in widely different locations across northern and central Iraq.

On Tuesday night they made a surprise attack with between 300 and 400 fighters, many of them North Africans from Tunisia, Algeria and Libya, on Kurdish forces 40 miles west of the Kurdish capital, Irbil. The Kurds say that 34 IS fighters were killed in fighting and by US air strikes. At the same time, IS was battling for control of the town of al-Baghdadi, several hundred miles away in Anbar province. Despite forecasts by a CentCom spokesman last week that the tide has turned and that IS is on the retreat there is little sign of this on the ground.

On the contrary, IS appears to have the human and financial resources to fight a long war, though both are under strain. According to interviews by The Independent with people living in Mosul reached by phone, or with recent refugees from the city, IS officials are conscripting at least one young man from every family in Mosul, which has a population of 1.5 million. It has drafted a list of draconian punishments for those not willing to fight, starting with 80 lashes and ending with execution.

All these new recruits receive pay, as well as their keep, which until recently was $500 (£324) a month but has now been cut to about $350. Officers and commanders receive much more. A local source, who did not want to be named, says that foreign fighters, of whom there are an estimated 20,000 in IS, get a much higher salary – starting at $800 a month.

“I know three foreign fighters,” said Ahmad, a 45-year-old shopkeeper still working in Mosul. “I usually see them at checkpoints in our neighbourhood: one is Turkish and the others are Europeans. Some of them speak a little Arabic. I know them well because they buy soft drinks from the shops in our neighbourhood. The Turkish one is my customer. He says he talks to his family using the satellite internet service that is available for the foreigners, who have excellent privileges in terms of salaries, spoils and even captives.”

Ahmad added: “Isis fighters have arrested four high-school teachers for telling their students not to join Isis.” Islamic State fighters have entered the schools and demanded that students in their final year join them. Isis has also lowered the conscription age below 18 years of age, leading some families to leave the city. Military bases for the training and arming of children have also been established.

Given this degree of mobilisation by Islamic State, statements from Mr Abadi and CentCom about recapturing Mosul this spring, using between 20,000 and 25,000 Baghdad government and Kurdish forces, sound like an effort to boost morale on the anti-Isis side.

The CentCom spokesman claimed there were only between 1,000 and 2,000 Isis fighters in Mosul, which is out of keeping with what local observers report. Ominously, Iraqi and foreign governments have an impressive record of underestimating Isis as a military and political force over the past two years.

Mr Hussein said at the end of last year that Isis had “hundreds of thousands of fighters”, at a time when the CIA was claiming they numbered between 20,000 and 31,500. He does not wholly rule out an offensive to take Mosul but, as he outlines the conditions for a successful attack, it becomes clear that he does not expect the city to be recaptured any time soon. For the Kurdish Peshmerga forces to storm Mosul they would need far better equipment “in order to wage a decisive war against Isis and defeat them”, he says. “So far we are only defeating them in various places in Kurdistan by giving our blood. We have had 1,011 Peshmerga killed and about 5,000 wounded.”

The Kurds want heavy weapons including Humvees, tanks to surround but not to enter Mosul, snipers’ rifles, because Isis has many highly accurate snipers, as well as equipment to deal with improvised explosive devices and booby traps, both of which Isis uses profusely.

Above all, Kurdish participation in an offensive would require a military partner in the shape of an effective Iraqi army and local Sunni allies. Without the latter, a battle for Mosul conducted by Shia and Kurds alone would provoke Sunni Arab resistance. Mr Hussein is dubious about the effectiveness of the Iraqi army, which disintegrated last June when, though nominally it had 350,000 soldiers, it was defeated by a few thousand Isis fighters.

“The Iraqi army has two divisions to protect Baghdad, but is it possible for the Iraqi government to release them?” asks Mr Hussein.  “And how will they get to Mosul? If they have to come through Tikrit and Baiji, they will have to fight hard along the way even before they get to Mosul.”

Of course, an anti-Isis offensive has advantages not available last year, such as US air strikes, but these might be difficult to use in a city. The US air force carried out at least 600 air strikes on the Isis-held part of the small Syrian Kurdish city of Kobani before Isis finally retreated after a siege of 134 days. In the most optimistic scenarios Isis splits or there is a popular uprising against it, but so far there is no sign of this and Isis has proved that it exacts merciless vengeance against any individual or community opposed to it.

Mr Hussein makes another important point: difficult and dangerous though it may be for the Kurds and the Baghdad government to recapture Mosul, they cannot afford to leave it alone. It was here that Isis won its first great victory and Abu Baqr al-Baghdadi declared the caliphate on 29 June last year.

“Mosul is important politically and militarily,” he says. “Without defeating Isis in Mosul, it will be very difficult to talk about the defeat of Isis in the rest of Iraq.”

At the moment, Peshmerga forces are only eight miles from Mosul. But  Isis fighters are likewise not much further from the Kurdish-held oil city of Kirkuk, which Isis assaulted last month. Given the size of Iraq and the small size of the armies deployed, each side can inflict tactical surprises on the other by punching through scantily held frontlines.

There are two further developments to the advantage of Islamic State. Even in the face of the common threat, the leaders in Baghdad and Erbil remain deeply divided. When Mosul fell last year, the government of Prime Minister Nouri al-Maliki claimed that the Iraqi army had been stabbed in the back by a conspiracy between Kurds and Isis. The two sides remain deeply suspicious of each other and, at the start of last week, a delegation led by the Kurdish Prime Minister Nechirvan Barzani failed to reach an agreement in Baghdad on how much of Iraq’s oil revenues should go to the Kurds in exchange for a previously agreed quantity of oil from Kurdish-held northern oilfields.

“Unbelievably, the divisions now are as great as under Maliki,” says Dr Othman. Islamic State has made many enemies, but it may be saved by their inability to unite.