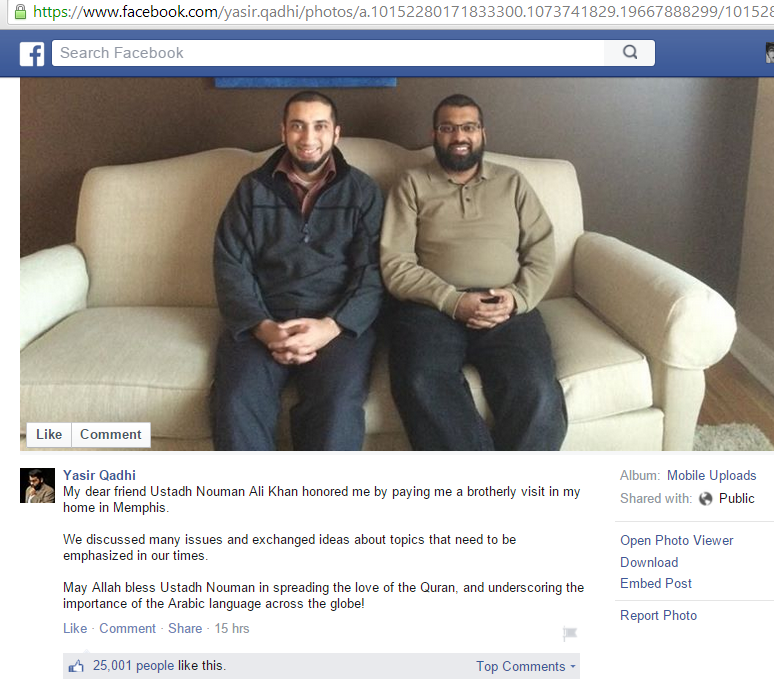 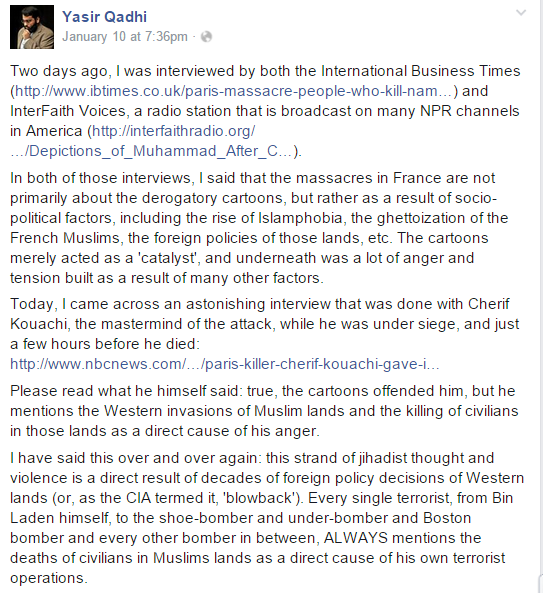 Yasir Kadhi is a known Deobandi-Salafi evangelist cleric who never clearly condemns Deobandi and Salafi-Wahhabi terrorism against Sunni Sufi and Shia Muslims, Christians, Hindus, Jews etc. In fact, not unlike the pseudo-Marxist Tariq Ali, he justifies the Deobandi-Wahhabi violence as socio-political resistance to Western imperialism.

This is exactly the line taken by Nouman Ali Khan too who NEVER clearly and unconditionally condemns Taliban, Sipah-e-Sahaba (ASWJ), ISIS and other Deobandi, Wahhabi takfiri khwarij.

Not unlike Farhat Hashmi, Zakir Naik, Tariq Jameel and Rafi Usmani, these two Islamists Yasir Kadhi and Nouman Ali Khan are Deobandi Wahhabi evangelists, the smooth talkers, who agenda is to subtly convert peaceful Sunni and Sufi Muslims to radical and violent Deobandi Wahhabi ideology. They pave way for recruitment by ISIS, Al Qaeda, Taliban and ASWJ.
From his facebook:

Two days ago, I was interviewed by both the International Business Times (http://www.ibtimes.co.uk/paris-massacre-people-who-kill-nam…) and InterFaith Voices, a radio station that is broadcast on many NPR channels in America (http://interfaithradio.org/…/Depictions_of_Muhammad_After_C…).

In both of those interviews, I said that the massacres in France are not primarily about the derogatory cartoons, but rather as a result of socio-political factors, including the rise of Islamphobia, the ghettoization of the French Muslims, the foreign policies of those lands, etc. The cartoons merely acted as a ‘catalyst’, and underneath was a lot of anger and tension built as a result of many other factors.

Today, I came across an astonishing interview that was done with Cherif Kouachi, the mastermind of the attack, while he was under siege, and just a few hours before he died:
http://www.nbcnews.com/…/paris-killer-cherif-kouachi-gave-i…

Please read what he himself said: true, the cartoons offended him, but he mentions the Western invasions of Muslim lands and the killing of civilians in those lands as a direct cause of his anger.

I have said this over and over again: this strand of jihadist thought and violence is a direct result of decades of foreign policy decisions of Western lands (or, as the CIA termed it, ‘blowback’). Every single terrorist, from Bin Laden himself, to the shoe-bomber and under-bomber and Boston bomber and every other bomber in between, ALWAYS mentions the deaths of civilians in Muslims lands as a direct cause of his own terrorist operations. 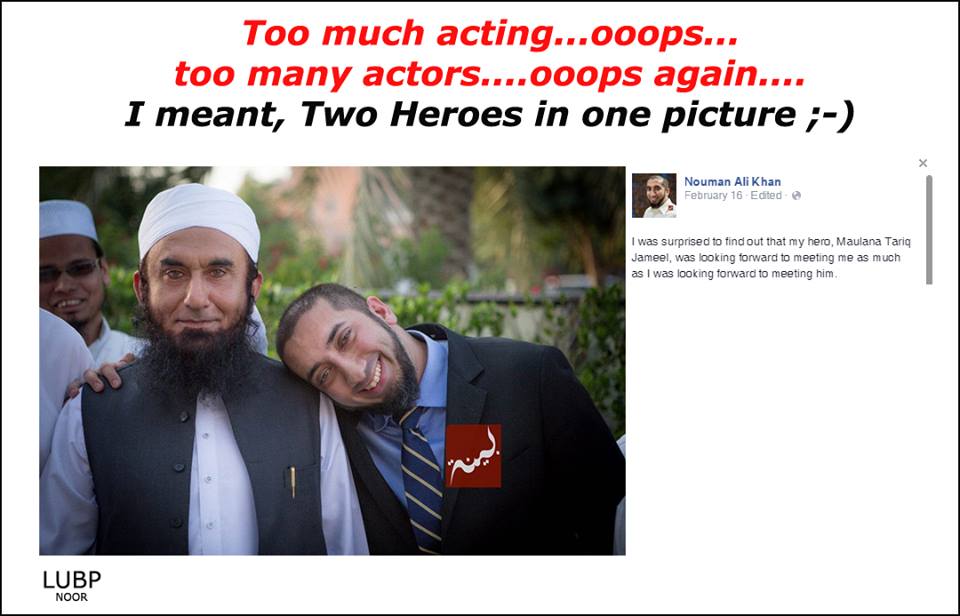