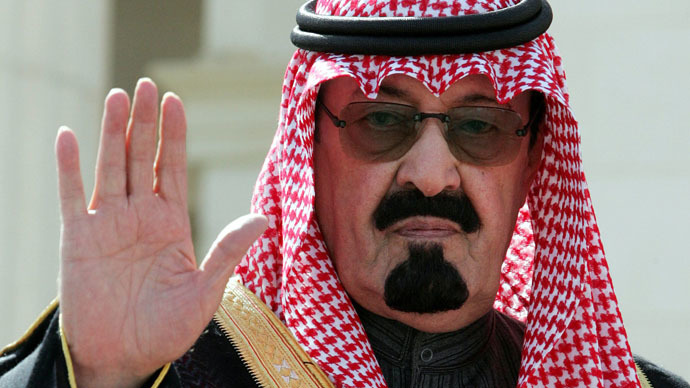 What do you call the unelected leader of a state that beheads people in public, permits only one faith and exports an extreme form of Islam to other countries? If he happens to be Abu Bakr al Baghdadi, self-appointed caliph of Islamic State (Isis), the answer is one of the world’s most wanted terrorists. If he is King Salman bin Abdulaziz al-Saud, the proper form of address is “Your Majesty”. Are we all clear about that? Me neither.

Yesterday, the Prince of Wales and the Prime Minister turned up in Riyadh to pay their respects to Salman’s half-brother, King Abdullah, whose death was announced on Friday. Abdullah’s demise, at the age of 90, unleashed a nauseating display of hypocrisy among world leaders.

Flags flew at half-mast in Whitehall while David Cameron – sorry, pass-the-sick-bag moment coming up – praised the deceased despot’s efforts towards “strengthening understanding between faiths”. I wonder if the PM could show me any evidence that the Saudi regime, which does not allow distribution of non-Muslim texts and regards apostasy as a capital crime, is remotely interested in understanding other faiths?

This is the same David Cameron who marched in Paris two weeks ago in solidarity with the victims of al-Qaeda-inspired terrorism. Then, there was much talk about human rights and free expression, both of which get short shrift in Saudi Arabia. Barack Obama, a conspicuous no-show in Paris, found the time to praise the absolute monarch and hailed the US-Saudi relationship “as a force for stability and security in the Middle East”. His Secretary of State, John Kerry, tweeted that the dead tyrant was “a man of wisdom & vision”. He even – I’m sorry, but that sick bag is about to overflow – claimed that the world “has lost a revered leader”.

Funnily enough, none of these busy men had time to mention Raif Badawi, the Saudi blogger whose flogging was postponed on the very same day because he hadn’t recovered from the 50 lashes he received two weeks earlier. Badawi’s monstrous sentence has come to symbolise everything that is wrong with the democratic world’s response to the kingdom. Prince Charles never misses a chance to cosy up to the Saudi royals, making a total fool of himself last February when he dressed up in traditional robes and took part in a sword dance in Riyadh. Six months on, Charles did not utter a squeak of protest when his Saudi mates executed more than 20 people in three weeks. Most were beheaded – not, I hope, with the sword Charles used for his little dance.

Few of the people hailing Abdullah as a “reformer” said anything about the kingdom’s truly horrifying record of human rights abuses. Don’t they know that a video recently emerged of a Saudi police officer chopping off the head of a screaming Burmese woman in the street? In a symbol of the regime’s profound misogyny, two Saudi women who broke the bizarre ban on female drivers have had their cases transferred to a terrorism court. So what the hell was the IMF boss, Christine Lagarde, thinking about when she described Abdullah as a “strong advocate of women”? She did add “in a very discreet way”.

Most egregious of all was the lack of any acknowledgement that the Saudi royal family promoted the puritanical ideology that created al-Qaeda and its offshoots. The kingdom is the cradle of Wahhabism, the extreme form of Islam that put the Saud family in power and keeps it there. The Saudis are almost as enthusiastic about public beheadings as their mortal enemy Isis, which shocked the world with videos of Western hostages about to suffer this awful fate. Where do people think Isis got the idea? Both al-Qaeda and IS want to restore a mostly imaginary caliphate that  would be, in many respects, indistinguishable from Saudi Arabia.

“Without us, it would be worse,” the Saudi royals warn, while systematically terrorising anybody who represents a legitimate form of opposition. They’ve spent years quietly assuring foreign allies that they’d love to bring in reforms but the country isn’t ready for it. I don’t know why this isn’t challenged more often, given that the royal family maintains an iron grip on the armed forces and intelligence service.

In effect, the family uses the threat of a conservative backlash to scare Western democracies into putting up with an ally they should be ashamed to be associated with. It’s an unsubtle trick.

And, guys, it isn’t working. The rest of us know that Saudi Arabia sent Osama bin Laden and other young Saudis to fight in Afghanistan, creating a worldwide jihadist movement. Since then, Wahhabist ideology has inspired horrific attacks on civilians in the Middle East, Africa, the US and a string of European capitals. Sucking up to the Saudis didn’t stop the 9/11 attacks, Madrid, the 7/7 bombings, the kidnapping of the Chibok girls or the massacre at Charlie Hebdo. Wahhabism is the problem, and Saudi Arabia, with its two-faced royal family, is where it all started.