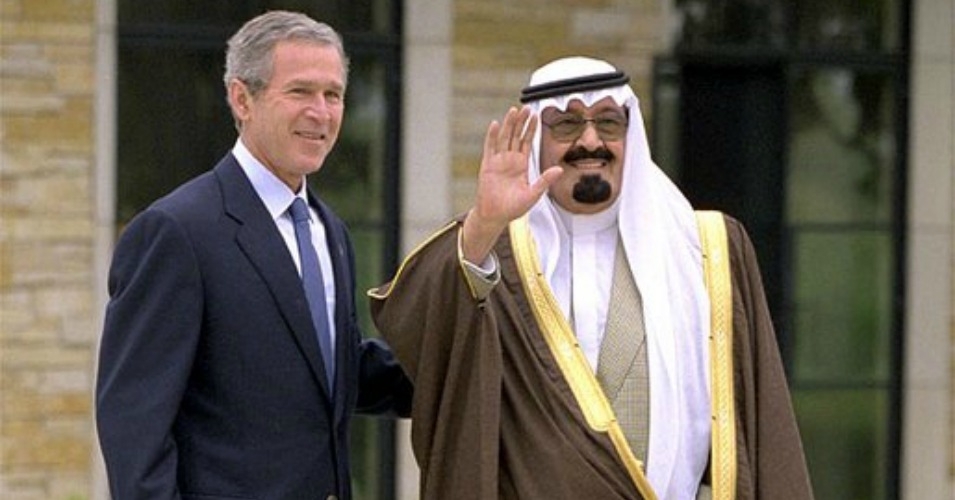 For people living in dictatorships and hoping for Western support on the road to freedom, reactions to the death of Saudi Arabia’s King Abdullah has been a rude awakening. It was to be expected that the passing of an important geo-political ally would be met with niceties and platitudes. But rather than courteous condolences, Western leaders have queued up to eulogize the late King with groveling and outright mendacious statements that border on Orwellian doublespeak.

Take U.S. Secretary of State John Kerry who on Twitter called King Abdullah a man of “wisdom,” “vision” and mourned that the world had “lost a revered leader.” We are talking here about the absolute ruler of a country, which according to Freedom House, scored the lowest possible ranking on respect for both civil liberties and political freedom (vying for worst dictatorship in the world with North Korea). In 2013, a democracy activist was sentenced to eight years in prison for “slandering the King”—a bespectacled old man who happened to be called Abdullah.

In Britain David Cameron emphasized the late King’s “commitment to peace and for strengthening understanding between faiths” and that his “thoughts and prayers are with the Saudi Royal Family and the people of the Kingdom.” It is a good thing then that Cameron lives in Britain and not in Saudi Arabia. Because unless Cameron was to convert to Wahabist islam, he would in fact be arrested for praying in the Kingdom, which also bans churches and bibles and, as late as last year, arrested 28 Christians for the crime of congregating in a private home. Apparently, such religious intolerance merits respect by the very religions whose members are being brutally persecuted. London’s spectacular Westminster Abbey led the way by flying the flag at half mast in respect of Abdullah. Of course being Muslim does not suffice to escape Saudi Arabia’s religious intolerance. Liberal saudi blogger Raif Badawi recently received the first 50 of 1,000 lashes for the crime of “insulting Islam” through his calls for separation of state and religion.

As for Abdullah’s supposed commitment to peace—it is worth remembering that Saudi Arabia reacted to the so-called Arab Spring by initiating a brutal counter-revolution, sending tanks into the streets of Bahrain’s capital Manama to crush the popular uprising against that country’s Sunni rulers. At home, Saudi Arabia moved quickly to quell any uprising by locking up would be protesters, further limiting avenues of dissent and appeasing any restiveness in the general population with generous benefits paid by its oil wealth. In Syria, Saudi Arabia has contributed to radicalizing the Syrian uprising against Bashar Al-Assad by arming extremist jihadist rebel groups sympathetic to and sometimes fighting side by side with Al-Qaeda groups and IS. More generally, the Wahabist ideology strictly imposed on Saudi society has been exported to all corners of the world creating extremists—some of them violent—in previously moderate Muslim communities from Asia to Africa, and even in the very West, whose leaders now praise the King.

Not to be outdone by Kerry or Cameron, IMF chief Christine Lagarde, without any hint of irony, labelled Abdullah “a strong advocate of women.” King Abdullah the suffragette, would be the same Abdullah who presided over a country that prohibits women from driving and from leaving their house without a male guardian, where two women’s rights activists were sentenced to 10 month’s imprisonment for “undermining marriage” when they helped a woman who had been abused by her husband. A country where women such as Amina Nassar are beheaded for committing “sorcery” and “magic.”

Abdullah’s apologists will insist that Saudi Arabia, as the world’s largest oil exporter, is a crucial force for stability in a volatile region and an indispensable ally in the fight against terrorism, now in its 14th year post 9/11. But let’s not forget that 15 of the 19 hijackers were Saudi nationals and that the ideology that caused them to murder 3,000 innocent people was made in Saudi Arabia. Moreover, in a Middle East riven by a bloody Sunni-Shia conflict, which Saudi Arabia actively contributes to, the idea that Saudi Arabia brings stability is much less convincing now than before. IS may constitute a more imminent and direct threat to both the ordinary people and religious minorities of Iraq and Syria, as well as the many Western states who have seen citizens join this movement; but, Saudi Arabia is arguably the bigger long term threat to both the stability and progress of the Middle East and Western societies increasingly vulnerable to the terrorism of home grown jihadists motivated by an ideology whose advocacy of violence is but the logical outgrowth of Saudi Wahabism.

Even if a realist Western calculus of pros and cons determines that abandoning Saudi Arabia will strengthen an emboldened Iran or chase Saudi Arabia into the arms of China, there should be—and must be—room for a significant shift in the West’s and especially America’s rhetoric on Saudi Arabia’s gross and systematic violations of human rights. America’s energy boom should not only benefit American manufacturers and consumers, but also those marginalized voices for reform and democracy who Saudi Arabia has been imprisoning, flogging and beheading with impunity for too long. Acknowledging the victims of King Abdullah rather than singing false praises would be a good start.