My response to a critical letter by a Deobandi – Zaid Hamid

I am recieving many such posts from deobandis every day. Most of them are only abuses, fatwas of Kufr, allegaitons of being a Kafir, Qadiani or an Iranian agent or a Mushrik etc etc. I have chosen one decent one to share with you and my reply, as these are the general questions which every Deobandi follower is asking. Please read this post three times, slowly because I have explained these issues a million times, still people don’t seem to get them. This is really strange and shows how people can get blind in love for their madrassa, even if it means supporting the Kufr. Read his mail first please. I have hidden his ID for his security.

I used to be a big fan of yours considering you are a true patriot but your recent posts and analysis since last few days is very disturbing.
I belong to Deoband sect and I am ready to give my life away for my country.
Recently your posts have been clearly naming Deobandis as terrorists. I do accept that a number of scumbags from our sect are bringing discredit to the sect but that is clearly wrong to blame the whole sect. Not a single person in this world is perfect everyone got flaws but you should identify the flaws. Naming all the deobandis as terrorist will get you a lot of fans from others sects but you are also hurting sentiments of millions of deobandis who want to live peacefully, their children go to school, who just pray five times a day, who wants to live happily with their children and who love Pakistan more than you.
We deobandis are against scumbags and terrorists like Abdul Aziz Ghazi, Fazl Ullah etc and we can contribute whatever is needed against them. Your propaganda is resulting in rise of hatred against deobandis. This hatred may result in worst case scenario and massacre of the innocent deobandis all over Pakistan.
Consider it my request and don’t relate people like Abdul Aziz to Deoband sect. . . Name them Khawarjis and that is acceptable for us as we also them.
This is not the time to spread hatred as we need harmony.
I hope you understand and act according.
P.S.
If any of my words offended you I apologize.
Regards
Majid Khan

Assalam alikum. Thank you for writing.

First let me clarify that I have made it clear a million times that I differentiate between Good and Bad Deobandis, just as we do between good and bad Taliban. I have quoted Mufti Rafi Usmani and praised him [on his clear condemnation of Taliban], then how on earth anyone with sane mind can accuse me of talking against all Deobandis? I am baffled…

Second, Deoband is NOT a sect. It is just a madrassa. Every Deobandi is Sunni, which is a sect. Every deobandi is also Hanafi, which is the Fiqh. Every Barelvis is also Sunni and Hanafi. So, where is the sect? Your sect is the same as that of Barelvis. Deoband is just the name of a school and is NOT a sect nor a Faiqh in Islamic law. Why do you call Deoband as a sect?

I have put up a simple demand to the leaders of JUI and top deobandi scholars. Repeat what their fellow Deobandi Mufti Rafi has said. If they don’t repeat those words, then I will attack them as I attack Fazlullah, Mullah Abdul Aziz and other Khawarj… what is so complicated in this?? why are these top deobandi scholars defending, protecting and helping the Khawarij?

The same Deobandi Mullahs are calling me a Kafir for the last 7 years. They have attacked my Imaan, faith, Izzat, rizq and life but you remained silent ?? Did anyone from Deoband stood up and said that our scholars are doing Zulm and putting bohtan on Zaid Hamid, who is only defending Pakistan and Islam?? Why were you silent then?? Why were all deobandi silent then? Why is that NO Barelvis, Ahl Hadees [Salafi] or Shia called me a Kafir but only Deobandis attack my faith? is it because I attack Hindus, Khawarij and TTP?

Is it a sin to differ with the political and military policies of Deoband? since 1920, Deoband is attacking Muslims and supporting Mushriks. Can anyone deny that ??

Now they are attacking Pakistan and their top leaders refuse to call TTP as Khawarij? [Their Deobandi Tablighi Jamaat (TJ) provides recruits to TTP (Taliban), SSP (Sipah-e-Sahaba), LeJ (Lashkar-e-Jhangvi) and other takfiri khawarij enemies of Pakistan.] I will attack BAD Deobandis and protect GOOD deobandis always.

Just calm down and think what will be your answer to Sayyadi Rasul Allah (sm) on the day of judgement when you will be raised with all Deobandis – from Hussain Ahmed Madni to Fazlur Rehman to Fazlullah to Mullah Abdul Aziz. If they were Shias, I would call them Shias but what should I call them if not Deobandis? 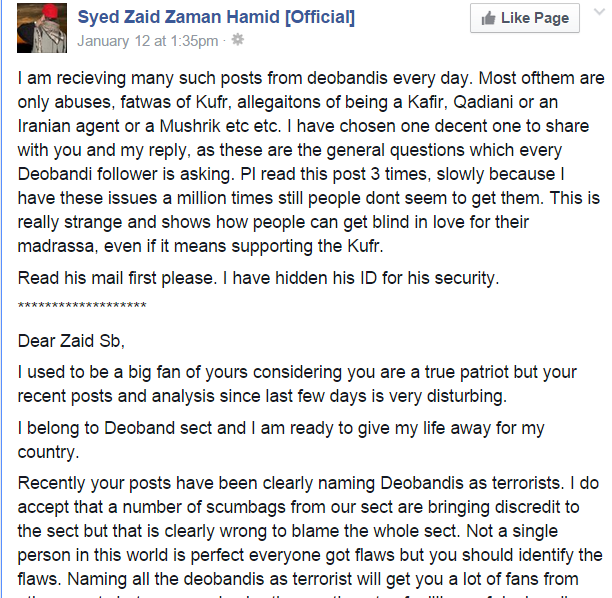 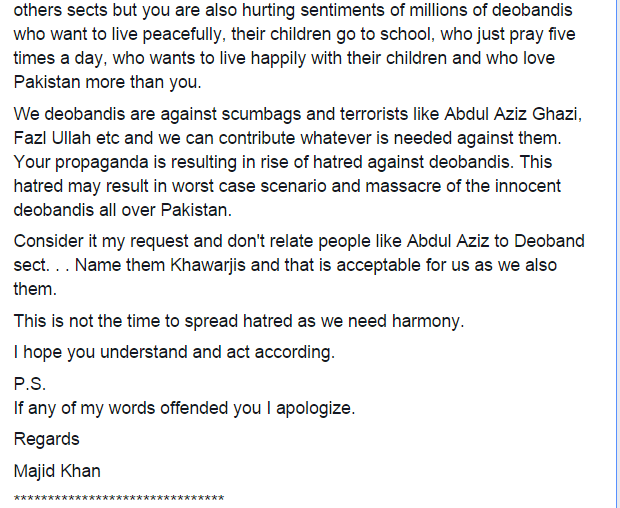 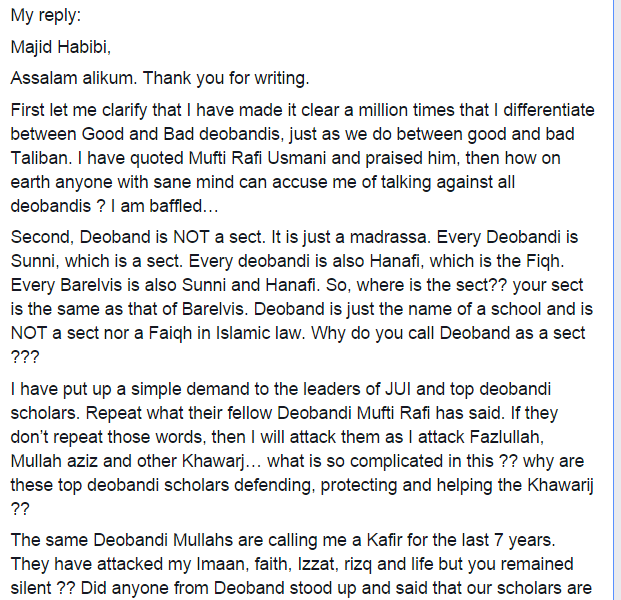 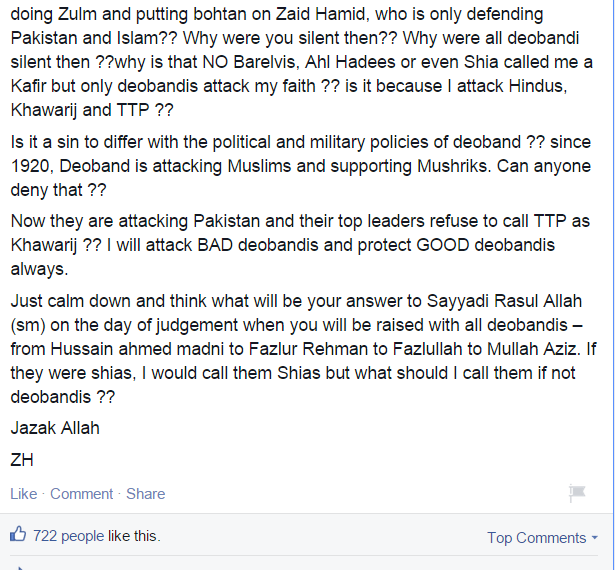