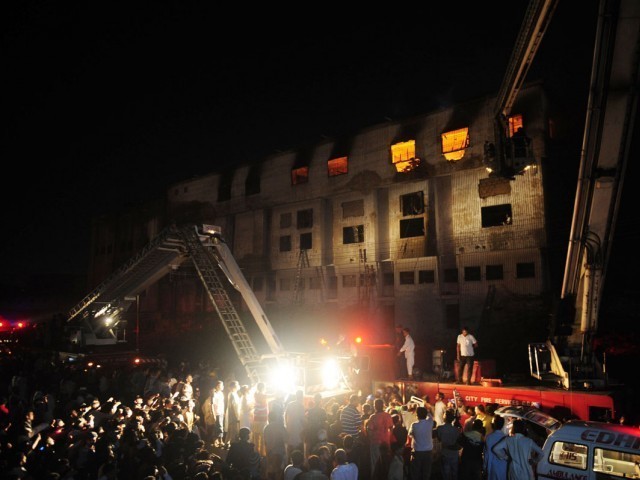 The Global Trade and Labour Compliance conference organised by the Pakistan Institute of Labour Education and Research (Piler), in collaboration with the Friedrich-Ebert-Stiftung, Pakistan, took an interesting turn when Advocate Faisal Siddiqi compared the death of Shahzeb Khan to the deaths of the 255 Baldia factory fire victims.

Siddiqi was sharing his insight on occupational safety and health. He talked about his experience of working with Piler on the Baldia factory fire incident. According to him, the tragedy took place because of the absence of safety provisions and the selfishness of the owners. He reminded the audience that the doors of the factory were locked from outside and only one exit was open.

He went on to compare the fire incident on September 11, 2012, with the murder of a DSP’s son, Shahzeb Khan, on December 25 in the same year. He said that he worked on both the cases and what shocked him was that Khan’s trial ended on June 6 last year while the trial of the Baldia factory inferno, which killed 255 people, has not even been initiated.

“The civil society does not have any interest in labourers because of class consciousness,” he said. “This shows the power of the class.” According to him, Khan’s case was given more importance and was resolved in a short time because it involved high profile names and people from higher social class.

He pointed out that the then prime minister, Raja Pervaiz Ashraf, withdrew the case against the owners of the factory within four months when the bodies of the victims had not even been buried. It took six months to bury the bodies after medico-legal formalities and that, too, was done after intervention from the court.

Siddiqi also blamed the German company, KIK, who got 75% exports from the Baldia factory and accused it of negligence bias for helping keep the factory workers’ wages low. The Italian firm, RINA, which issued the SA 8000 social accountability certificate without any inspection was also held responsible for the incident.

The economic adviser to the chief minister of Balochistan, Dr Kaiser Bengali agreed with Siddiqi. “The Baldia factory fire incident showed us that our government and civil society consider labourers only a tool of production which is replaced by new tools or labourers if they are burnt or die.”

Siddiqi talked about the illegal mezzanine floor of wood which exacerbated the fire. He regretted how the building authorities, who usually demolish even a single wall raised without their permission, ignored the whole floor. Reminding the absence of fire alarms which allowed the fire to spread in half an hour, he urged that we should accept the reality that state does not do anything and, therefore, every individual has to play her/his role.

While talking about social protection and state policies, development activist Saba Gul Khattak criticised the government’s custom of solving or compensating the death of victims by paying death money to the relatives instead of prosecution or finding real solutions to the problem. She questioned if money is the answer to all these problems.

In his article in Express Tribune, Faisal Siddiqi advocate has rightly pointed out that our civil society has different sets of standards on the public issues. The “class-conscious” civil society reacted severely and people especially youth from Defence and Clifton areas of Karachi were on roads after the murder of Shahzaib Khan in December 2012 and it was the force of social media that the most powerful killer Shahrukh Jatoi was caught via Interpol and was convicted within the shortest possible time of about three months. But the so-called civil society’s reaction on the Baldia Factory Fire incident in the same year (11th September 2012), in which over 250 workers of a garments manufacturing factory, Ali Enterprises, were burnt alive in Karachi city was pathetic. No street demonstration was staged by youths of any area (except for some labour organizations) and the criminal cases against the owners of the factory has even not initiated in the concerned courts despite passage of two years. Interestingly, Faisal Siddiqi was the lawyer in these two different cases pertaining to public interest.