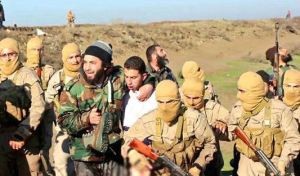 Fahwad Al-Khadoumi (nsnbc) :  On Wednesday, ISIS claimed that it downed a Jordanian fighter jet near the city of al-Raqqah, displaying photos of the captured pilot. The Jordanian Air Force confirmed the capture of the pilot and his identity, but claimed that the jet hadn’t been shot down.

Images of the downed Jordanian pilot, Muaz al-Kasasbeh, were published by the Raqqah news service that operates in the city under permission of the so-called Islamic State, a.k.a. ISIS, ISIL, and Daesh. The insurgents also spread the images via their own social media outlets.

The images show the pilot surrounded by ISIS fighters after he had been drawn “out of a lake”.

Although no specifics were provided about the exact location where the jet came down, the only lake in the region is the Al-Assad Lake and a containment lake on its southern end. Both are created by artificial dams in the Euphrates river.

While ISIS claimed that it had shot down the Jordanian jet, both U.S. and Jordanian officials rejected the claim without mentioning any details about what else may have caused the jet to crash.

Media speculate that ISIS could possibly have downed the Jordanian jet with shoulder-fired Russian missiles captured “or provided” to them from Iraqi military arsenals. nsnbc could not independently verify such claims.

The Jordanian news agency PETRA quotes “a Jordanian official” as saying that Jordan will hold ISIS fully accountable for the safety of the downed pilot. Family members have since confirmed the identity of the pilot, as Muaz al-Kasasbeh. Family members spoke to Jordanian media in support of their relative while praising Jordanian King Abdullah for his “effort against ISIS and terrorism”.

Ironically, Jordan has provided one of the main staging theaters for Al-Qaeda and Muslim Brotherhood linked, foreign funded and armed mercenary brigades since the onset of the war on Syria.

“It is well-known that this organization does not hide its terrorist agenda and has committed criminal acts and killed innocent Muslims and non-Muslims in Syria and Iraq. Therefore Jordan holds this group and whoever supports it responsible for the safety and the life of the pilot”.

“If this unnamed Jordanian Official wants to start holding those who are behind ISIS accountable, one obvious person to begin with would be U.S. Senator John McCain.”

The statement was a reference to a clandestine meeting Senator John McCain held with FSA and ISIS commanders in the Syrian city of Idlib in April 2013 after McCain illegally crossed the Turkish – Syrian border.

Present at the meeting in April 2013 were, among others, the self-anointed Caliph Ibrahim, a.k.a. al-Badri or al-Baghdadi of ISIS.

It is noteworthy that the flight of Jordanian, U.S., and other members of the so-called alliance against the Islamic State in Syria are being conducted in violation of international law and the sovereignty of the Syrian State.

Several analysts pointed out that the air campaign against ISIS creates a de-facto no fly zone against the Syrian Air Force and prevents the Syrian Arab Army and Air Force from reasserting control over the northeastern region of the country.

In mid-December the spokesman for the Russian Foreign Ministry, Alexander Lukashevich, criticized the modest results of the anti-ISIS coalition and stressed Syria’s role as regional anti-terrorism vanguard, saying: “Everything that is happening underlines that it is the Syrian government that bears the brunt of the fight against terrorism that has become a menace to the entire Middle Eastern region.