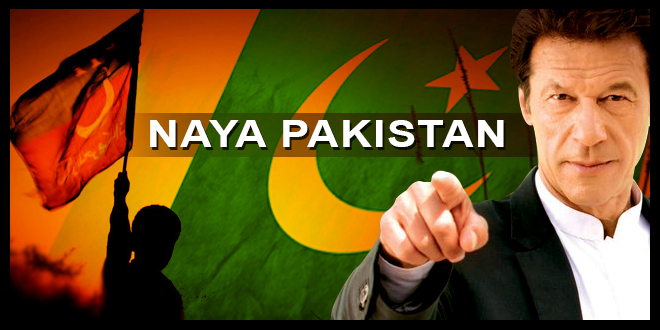 Imran Khan claims to build ‘Naya Pakistan’, however, he has not provided practical solutions to complex internal and external challenges of Pakistan. He does not seem to have a tangible blueprint of his ‘Naya Pakistan’.

After the 18th amendment the provinces have the authority to do many things for peoples’ welfare but the PTI has not delivered what it had promised to the people of Khyber Pakhtunkhwa before the elections. With the current state of affairs Khyber Pakhtunkhwa is not likely to become a model province that Imran can showcase as an example of his ‘Naya Pakistan’.

Imran is politically isolated, even Jaamat-e-Islami’s amir Siraj-ul-Haq disagrees with Imran’s approach and strategy. Nonetheless, despite Imran’s shortcomings a lot of people still believe in him.

Imran is saying what people want to hear. However, the public also want their problems resolved. And this is the issue. Imran has identified problems but he does not have clear and concrete solutions. But Imran’s supporters have faith in him and some people give Imran the benefit of doubt. Such people are ready to ignore the PTI’s poor performance in Khyber Pakhtunkhwa.

Now let us assume that Imran gets a chance to become prime minister not by a shortcut (using army’s shoulders) but through free and fair elections. Will he deliver, or to put it more accurately, would he be able to deliver what he is promising?

There should be no doubt that Pakistan has controlled form of democracy where intelligence agencies call shots in shaping the political system, especially governments.

The Agencies have big influence/role in managing the elections and formation of governments. Since General Zia-ul-Haq times, military intelligence agencies have been advising many political parties on the selection of their election candidates, the Agencies play behind the scene role in forming political alliances.

The formation of the Pakistan National Alliance in 1977, the creation of Islami Jamhoori Ittihad (IJI) in 1988, the establishment of a special election cell at the President House in 1990, promotion of Nawaz Sharif in the 1980s and 90s, patronization of Jamat-e-Islami in 1970, and also during the 1980s and 90s, and lately the ISI Chief General Shuja Pasha’s political lobbying and networking for the PTI are examples of the military efforts to achieve desired political goals.

Zulfiqar Ali Bhutto’s removal and his murder at the hands of GHQ through the Supreme Court is an example of what could happen to a politician who wants civilian supremacy. Benazir Bhutto, Nawaz Sharif and several other leaders also suffered for the same reason. .

One would hope that after the death of General Zia the military’s influence in politics would reduce but in reality quite the opposite has happened. Now General Zia’s ghost is dancing everywhere in Pakistan. One way or the other strings of all political parties are in the hands of secret agencies. Secrete services seem to have infiltrated the media. Press freedom in Pakistan is compromised. Media discourses and narratives are controlled. The media support the military’s political agenda. Now we have tamed politicians and vision less leaders who seek the ISI approval for their success and survival.

Imran wants change, the question is would he change all what is mentioned in the above lines? Would he challenge the Agencies’ role in politics? I doubt it. Looking at the alleged role of General retired Shuja Pasha in PTI’s formation, and also the Ex-Servicemen Society’s influence in the PTI, it will be very hard for the PTI leadership to resist the power holders.

Imran wants free and fair elections. That also means elections which are free of Agencies’ meddling. Will that happen? Again I doubt it.

Out of PTI’s 26 seats in the National Assembly, it had won 17 from Khyber Pakhtunkhwa Province.

Now let us suppose some miracle happens and Imran’s dreams come true—meaning the next elections, whenever they happen, will be free and fair from all kind of pollution, including the agencies’ wheeling and dealing.

In that case, if nothing big or dramatic happens, my educated guess is that out of the148 National Assembly seats in Punjab Province, Imran Khan’s PTI is likely to win between 65 and 75 seats. The rest of the seats will be divided between PML (N), PPP and other parties. In Karachi the PTI can win a few seats (two or three). In Khyber Pakhtunkhwa, the PTI National Assembly seats could be under 10. It may not win any seat from Baluchistan again but may win one seat from Islamabad again. Therefore the estimated number of PTI seats in the National Assembly could be under 100. With reserved seats the total number of the PTI seats in the National Assembly would be somewhere between 110 and 120. With that number of seats Imran may become the Prime Minister but he has to form a coalition government.

Also the PTI is not expected to form governments in Khyber Pakhtunkhwa, Sindh and Baluchistan provinces as well as in the Pakistan Administrated Kashmir and Gilgit & Baltistan.

In free and fair elections, parties like the PPP and ANP would perform much better than the 2013 elections. The PML (N) is also expected to survive as a major party in the province of Punjab.

In the eventuality of Imran becoming the Prime Minister, the big question will be how he will build his ‘Naya Pakistan’ without having his party’s governments in the provinces and a weak coalition government in the Center, especially when he disagrees with all the major political parties of Pakistan?