It is sick men like this former CJP of LHC that represents the current judiciary in Pakistan. The same left-liberal civil society types went gaga over this judiciary. It just shows the selective nature of this crowd that they could stand behind such disturbing individuals like this judge and his boss, the corrupt Pro Taliban Rana Iftikhar Chaudhary! Time was that any criticism of this judiciary during the hey day of the PML N sponsored Liar’s movement was labelled as Treason. And then this judicial dictatorship was re-launched in 2009 to serve the interests of murderous ASWJ-LeJ by freeing all their boastful killers. over a 100 judges were kicked out unconstituionally and an elected Prime Minister from PPP was disqualified – again with no basis in the Constitution. The Contempt of Court Ordinance that these Taliban Jhangvi judges used to suppress all dissent was in itself part of General Musharaf’s tampering with the Constitution. The tampering of the Constitution was a gift from these same corrupt PCO judges which Musharaf had not even asked for. 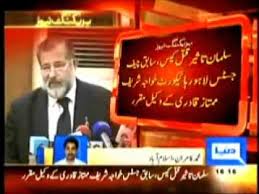 When these civil society type fake liberals trotted out their “PPP abandoned Taseer” bs, the irony was unmistakable. The source of this propaganda were the same people who had backstabbed PPP in favour of their continued support to this bunch of sellout judges.

Freeing Malik Ishaq and Arsalan Iftikhar, making a mockery of the constitution, gave mulitple stay orders to all cases belonging to their PML N sponsors were just some of the gifts of this judiciary. 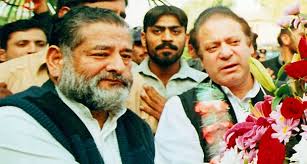 Do a google search from 2007 to 2009 to see the fawning sycophantic odes written for this judiciary whose representative is this Khawaja Sharif – CJP of the crucial LHC. One of the main reasons that this judiciary was allowed to get away scot free is the spineless and opportunistic support given to it by Pakistan’s so-called civil society types