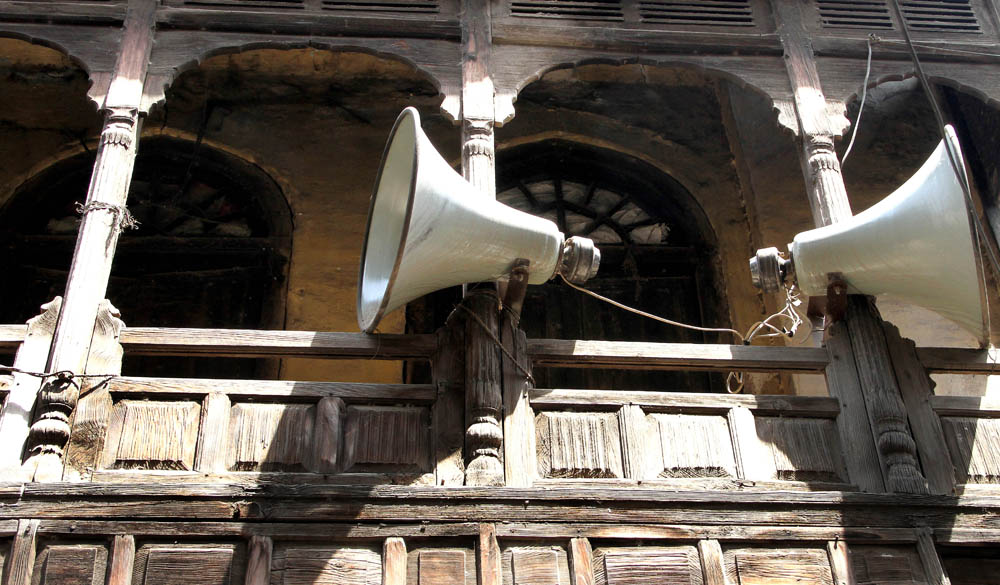 Once seen as a technological invention of considerable utility, the loudspeaker (mukabir-e-sawt) is now looked upon by some as a social bane and a source of nuisance. Affixed to the tall minarets of mosques, the loudspeaker has, over the last eighty years or so, become an integral part of its physical edifice. In Pakistan, the mosque as a space of worship is virtually inconceivable without the loudspeaker.

One may argue that no other instrument has ever cast a more profound influence on Pakistani politics and society than this. Since the aim of this narrative is to place the usage of loudspeakers as a source of empowerment for the clerics in historical context, our focus will remain confined to how it acquired acceptability as an inseparable part of our religious milieu, after initial reluctance by the Ulema.

The loudspeaker has played a vital role in allowing the clergy to wield influence across political, social, and cultural realms, and yet has attracted little attention from academics. ‘The politics of sound’ has, thus, become the sole preserve of the Ulema and maulvis, eluding the interrogative gaze of scholars.

An anthropologist from the University of John Hopkins, Naveeda Khan’s study, The Acoustics of Muslim Strivings: Loudspeaker use in ritual practice in Pakistan, is the sole exception in this regard that takes a holistic view of the subject at hand. It seems apposite, however, to shed some light on the relationship that Muslim clergy in the subcontinent have forged with this empowering instrument, remaining mindful of the fact that the process of the loudspeaker’s appropriation by clerics was far from smooth.

Naveeda Khan assumes that the loudspeaker was first used inside mosques in the late 1920s, although “only in the 1950s did it begin to be used to broadcast the call to prayers and the instructions from the imam to the congregations that spilled out of mosques.”

It is hard, however, to determine the exact date when loudspeakers began to be used in mosques.

Mufti Muhammad Shafi’s book, Alat-e Jadida ke Shari’i Ahkam, includes a copy of a 1928 fatwa by Maulana Ashraf Ali Thanvi, whereby prayer with the aid of loudspeaker was pronounced invalid. An apologist for the Ulema, Waqar Akbar Cheema, contends that Islamic scholars, including Thanvi, were oblivious of proper functioning of the loudspeaker. Their quandary was ‘whether it simply amplifies the sound or first records it and then transmits it’.

Of course, to this day, prayers are considered invalid with recorded sound. However, Naveeda Khan delves deep into this scholastic tangle. Thanvi, according to Khan, ascertained that “a loud speaker transmitted sound through the collision and concatenation of the sound signals and the production of echo effects.” In that case, Thanvi maintains, “the consciousness, purposiveness, and directionality of the imam’s instructions stood to be significantly compromised.”

Mufti Shafi (1897-1976), renowned scholar of the Deobandi tradition and a student of Thanvi, also observed that a loudspeaker’s failure can result in the breaking out of chaos in prayer, which made prayer “worthless and necessary to repeat”. The pervasive usage of a loudspeaker, Shafi opined, led the devotees to rely excessively on technological props, which hindered the offering of prayer with utmost concentration. However, he stopped short of a complete denunciation of loudspeaker, content with the verdict that prayer without a loudspeaker was preferable.

Despite these caveats from the Ulema, the loudspeaker, in the course of time, garnered some supporters, too. Shabbir Ahmed Usmani (1887-1949), Mufti Kifayat-ullah Dehlvi (1875-1952), and Maulana Maududi (1903-1979) were favourably disposed toward the use of loudspeakers in mosques. By the 1950s, the Saudi Arabian government had also begun to use loudspeakers to announce the azan and broadcast the instructions of the imam on the eve of Haj, which must have worked as an act of persuasion for Pakistani Ulema, eventually leading to the pervasive use of loudspeakers in mosques.

Subsequently, the loudspeaker was deployed continuously to solidify the monopoly of the maulvis and imams over the politics of sound through which they derived power and influence. On the use of loudspeaker, all sects and denominations are in complete agreement and all of them resort to its optimum use in all circumstances.

In the case of Pakistan, it would be interesting to look at the role of loudspeaker in spawning trouble during the anti-Ahmadi movement of 1953, because my own hunch is that the instrument in question was profusely used for the first time since Pakistanindependence to mark the protest against the state. In the 1977 Nizam-i-Mustafa movement against Zulfikar Ali Bhutto, the loudspeaker and mosque both had a prominent role to play.

In 2008 in Oxford, England, local residents were incensed over the proposal for a mosque to use loudspeakers to broadcast calls for prayer, calling it ‘an un-neighbourly intrusion that would disrupt peace and quiet’. The same happened in Michigan, US, in 2004 when the Al-Islah Mosque in Hamtramck asked for permission to broadcast azan, and people protested.

In India, the anti-noise pollution activists have called for restrictions on the use of loudspeakers, ‘arguing that religion is not a ground to violate noise rules.’ Many analysts have branded loudspeaker as the principal source of spawning communalism, and have, therefore, pleaded for a blanket ban on it.

The same exhortation was issued by the Saudi minister of Islamic Affairs in 2002, when he categorically admonished khatibs and imams and forbade them to use mosques for gaining political leverage. All of which begs the question whether anybody in Pakistan could say something like that. I strongly doubt it.