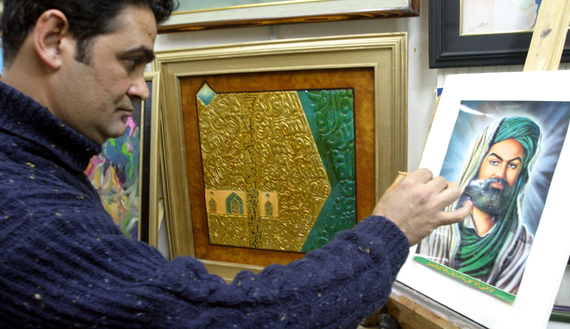 Painter Mohammed Hetlr has been preoccupied with drawing and painting sacred Shiite figures from Iraq and around the world. He has been making good money selling his work and, in an interview with Al-Monitor, said that he considered his painting to be part of his “religious duty” to express his faith and ideological commitment.

This art, which often comes from the Naive school of painting, has become very popular with many Iraqis, who have acquired the custom of hanging the paintings on their walls, in their grocery stores or official institutions and mosques.

Even the Iraqi security forces, especially the so-called popular mobilization forces, are hanging these paintings on military vehicles during military parades, at battlefronts and during clashes with the Islamic State (IS), a Sunni militant group that has managed to occupy large parts of Iraq and Syria and invaded the city of Mosul on June 10.

Hetlr said, “Religious painting in Iraq reflects the spiritual motives of religious people, as it appeals to their religious sentiment. The portraits of sacred figures are painted with utmost care to present them in the best light, as these figures are held in high esteem among people.”

A drawing by Hetlr depicts Imam Hussein bin Ali, who was killed in Karbala.

For her part, Hind Abdul Hussein, a social researcher from Najaf in central Iraq, told Al-Monitor, “Paintings of religious figures are found in most Iraqi homes, government [offices] and private institutions. [They include] mainly paintings of Imam Hussein bin Ali, Imam Ali bin Abi Talib or paintings of the Battle of Karbala, in which Hussein bin Ali was killed in the year 61 AH [680 A.D.]. These paintings are also found on the facades of buildings and on work desks as people have deep faith in the figures they depict.”

“During the previous Iraqi regime [of Saddam Hussein], this type of art was not widely popular. People used to trade religious paintings in secret, without the knowledge of the authorities [for fear of the state]. Today, however, these paintings are found in public squares, in the media, large murals and as mobile wallpapers. The former regime, which was ousted by a US military invasion in 2003, had banned Shiite religious ceremonies and the paintings of Shiite imams in mosques,” she added.

Ali al-Yasiri, the owner of a printing press in Babil, told Al-Monitor, “There is high demand for these paintings, especially during religious occasions. They have become a trendy commodity for owners of printing presses and painters.”

“We rely on certain models in printing, [and many] are by Iranian painters who are well known for their great ability to depict historical events. However, since 2003 Iraqi painters have started to excel in this art,” he added.

Yasiri also said, “There are no statistics on the number of these painting as they are produced by printing presses across the country, without any political or religious censorship [or regulation]. Last year our printing press produced more than 10 million copies.”

Painter Khaled al-Jabouri, who has depicted the death of Imam Hussein, told Al-Monitor, “The biggest winners of this trade are the owners of printing presses and traders. They buy a sample (one painting) for a small amount that does not exceed $300, and then make countless copies of the painting and make huge profits. The role of painters ends at the point [of sale].”

Jabouri talked about “Iranian painters, who portray the [originally Arab subjects] with Persian features. This is why we have started to portray sacred figures with different, more Arab features.”

“In general, the sacred figures all have similar features, as they bear a likeness to Jesus Christ. Many holy and sacred figures are depicted, whether from Iraq, Iran, Lebanon or other countries from among the Shiite community,” he added.

Iraqi painter Sattar Kawoosh told Al-Monitor, “The root of this art goes back to the era of great classic religious works in churches, when Christian clergy in Europe used to task painters with these drawings.”

“Art has always interacted with the sacred in building civilization. The most prominent example to this effect is Michelangelo, who was tasked by [Pope Clement VII and completed under] Pope Paul III with the paintings in one of the churches [the Sistine Chapel in the Vatican],” he added.

According to historical sources, this art spread among Christians in the Arab world to depict the portrait of Jesus and the Virgin Mary.

For his part, cleric Abdul Abbas al-Sultani from Babil stressed the spiritual value of these paintings. In an interview with Al-Monitor he said, “The paintings performed miracles. They bring a source of livelihood, ward off envy, bring peace and tranquility and eliminate anxiety. People talk about many miracles thanks to these paintings, such as healing the sick, bringing inner peace and exorcism.”

“In the Mazeediya village, which lies 25 kilometers [15.5 miles] south of the Babil governorate, there was a house haunted by a jinn, which was warded off only when the residents hung the painting of Imam Hussein bin Ali,” he added.

Moreover, a photo posted on the Yahossen Facebook page shows the aftermath of an explosion that took place in Sadr City in Baghdad in 2013. The bomb caused havoc in the area, but the painting of Hussein bin Ali remained intact, unaffected by flying shrapnel.

Not all like what the paintings represent. Nassar Alkurity, a journalist from the Iraqi Media Network, told Al-Monitor, “These paintings desecrate what is holy, even if inadvertently,” while noting that they have become “a common phenomenon.”

Saleh al-Sayyed Baqr, an Iraqi writer and researcher in interfaith affairs who lives in Iran, told Al-Monitor, “The religious art has persisted throughout the years. However, clergy did not pay enough attention to these kinds of paintings. There are no drawing and painting classes in the hawza [Islamic seminary for higher study].”

“Clerics have concerns that these works of art would offend the sacred figures,” he added.

Baqr shares this opinion with Iraq’s supreme religious leader, Ali al-Sistani, who issued a fatwa stating the need to “avoid [acquiring] paintings depicting imams so as to avoid committing sins.”