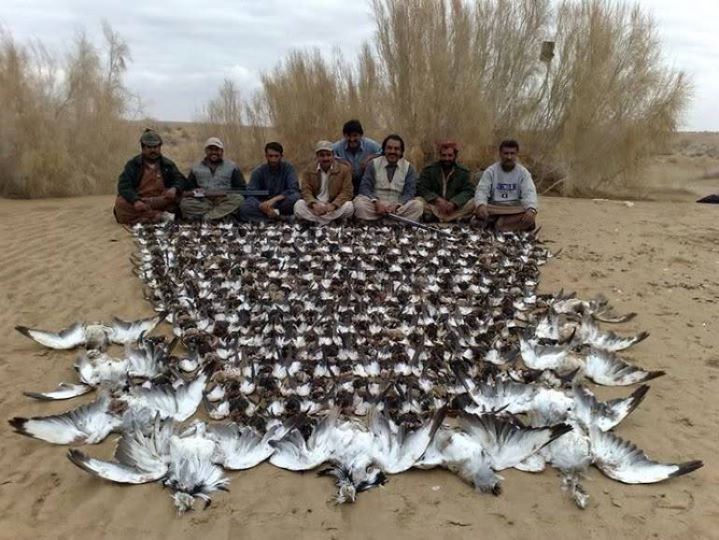 From the Daily Times in Pakistan:

The government has once again issued several Gulf royal families dozens of permits to come and hunt (read poach) the threatened Houbara Bustard, alias Tiloor in the local language, in different areas of Pakistan.

It is not the first time a Pakistani government has done so. The violation of a written law carries no value for our rulers when it comes to please their patrons inside or outside the country.

The Houbara Bustard, a migratory bird that nests in Pakistan during winter before flying back to Siberia in spring, has been listed in the International Union of Conservation of Nature (IUCN) as an endangered species. Estimates say a decrease of 30 per cent of this species has occurred in Pakistan alone.

According to a report, almost 25,000 Houbara Bustards arrive in the arid areas of Pakistan every year and approximately 6,000 of them are killed just to serve the Arab Sheikhs’ blood sport.

Pakistan has its own laws that prohibit these hunting safaris and in fact favour the preservation of this specie. But in an antinomian country such as Pakistan, where no law can restrict the powerful, such licences are mere formalities and the poachers, mostly from wealthy Gulf States, exceed the permissible bag-limit by a ridiculously high number.

Earlier this year, a Saudi royal gunned down 2,100 Tiloors in a fortnight, including areas that were out-of-bounds. Clearly, nothing can stop ‘their highnesses’ and ‘their majesties’ once they are out on their hunting sprees, irrespective of the ecological and environmental damage.