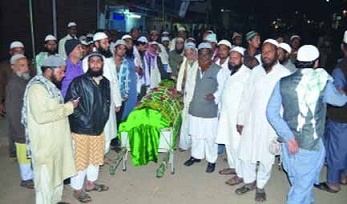 NEW DELHI – Ideological differences are widening the rift between two major Muslim groups in central India, with the split escalating to the point of banning each others from attending mosques.

“The Barelvis (Sunni or Ahlus Sunnah) in India follow certain Sufi practices. They think themselves closer to Prophet Muhammad. They often visit graves of saints and some people even worship them,” Chhattisgarh-based Muslim scholar Mohamed Abdullah told OnIslam.net.

“On the other hand, Deobandis are against Sunni Sufi practices and over devotion to Prophet Muhammad.”

Rift has been widening between followers of the Barelvi and Deobandi schools in Madhya Pradesh and Chhattisgarh in central India.

The division has escalated to the point that followers of each school of thought do not allow others to pray in their mosques.

In an incident, members of the Deobandi school of thought in Chhattisgarh had to flee over opposition from Barelvi Muslims to their presence.

The differences between the two groups have reached to the point that a notice has been put at many mosques in Chhattsigarh state banning Deobandis from entering the worship places.

Deobandis were also reportedly prevented from burying some members by followers of the Barelvi school.

“I wanted to bury my mother and even that was denied to me.”

Barelvi is a term used for a Sunni Islamic movement originating in South Asia.

The name derives from the north Indian town of Bareilly where its main leader Ahmed Raza Khan shaped the movement by his writings.

Although Barelvi is the commonly used term in the media and academia, the followers of the movement often prefer to be known by the title of Ahlu Sunnah wal Jam’at.

Meanwhile, the Deobandis are associated to Darul Uloom Deoband, one of the most pioneering school of thought in India and south Asia.

In India, they are believed to be more fundamentalist and closer to Saudi Arabia.

“They (Deobandis) are particularly against some practices of Barelvi Muslims like constructing permanent graves, celebrating Milad-un-nabi (Prophet’s birthday) and visiting saints for help,” said Abdullah.

“This has created a rift among the two sects and they are not ready to accept each other and fight over trivial issues.”

Scholars and activists criticize the widening gap between the two Muslim groups.

“In Chhattisgarh, the Sunni Muslims are divided in two groups– Barelvi and Deobandi. Both are Sunni Muslims. Both are governed by the same laws,” advocate Mohammad Wasim told OnIslam.net.

“Their way of prayer is same and after death the same rituals are followed and they are buried in the same graveyard. There is no provision of separate graveyards for Barelvi Sunnis and Deobandi Sunnis.”

He said that both Deobandis and Barelvis have the same rights in India.

“The law of the land accords the same status to both of them and everyone, whether he or she is Barelvi or Deobandi, has the legal right to bury the body in accordance with the law.

“In such a scenario, it is a gross violation of human and constitutional rights to stop a particular group from burying the body after the death of their near one.”

Some scholars blame the rift to some practices seen as “un-Islamic” by followers of the rival group.

“They believe in sainthood of certain individuals after (Prophet) Muhammad, claiming that they are blessed with extraordinary powers by the Almighty.

“Over years political rivalry has led to sharp sectarian divide among them.”

There are some 140 million Muslims in Hindu-majority India, the world’s third-largest Muslim population after those of Indonesia and Pakistan.