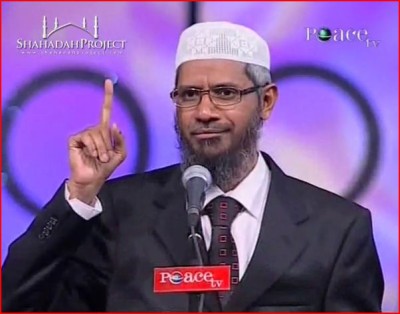 Note: This is a guest article sent by IndiaFacts reader and supporter, Anand Mathur.

The Middle East is burning with the fire of hatred as Muslims in the region commit fratricide. Europe is itself grappling with the aftermath of this violence as youth from the region are leaving in hordes to join the new found Sunni Caliphate, the erstwhile ISIS / ISIL.

One man that stands out as the key ideological source of inspiration to this mindless violence is Zakir Naik. This man continues to churn out his hate videos, advocating extremist Wahabbi ideology and global Islamist assimilation under his deviant philosophy.

There is ample evidence against Zakir Naik on the global impact of his extremist Jihadi teachings. India itself is suffering from his influence. To begin with, let us look at the elaborate evidence against this man: 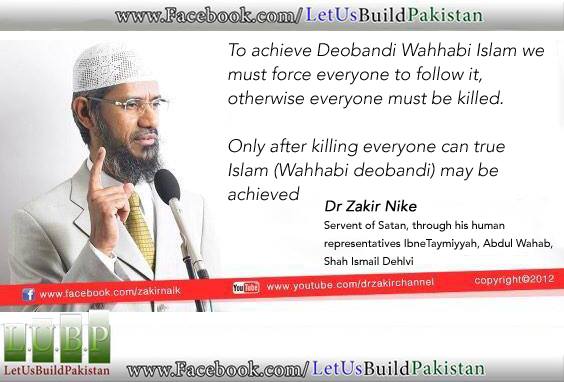 Here is the video evidence, straight from the horse’s mouth:

Not many people know that Zakir Naik’s Islamic Research Foundation (IRF) was extensively featured on the website of Jamaat-ud-Dawa, the parent religious and political organisation of the notorious Lashkar-e-Taiba (LeT), a Terrorist organisation declared under the Unlawful Activities (Prevention) Act, 1967. Here is a screenshot of the Jamat-ud-Dawa website from January 2008.

IRF’s link with the 2006 Mumbai serial bombings has been exposed by senior journalist Praveen Swami. He wrote in the Hindu on 8th July, 2007 and we quote:

“Investigations into the 2006 serial bombings in Mumbai showed that top Lashkar-e-Taiba organisers Rahil Ahmed Sheikh and Zabiuddin Ansari often met at the Islamic Research Foundation (IRF) in Mumbai’s Dongri area. IRF librarian Feroz Deshmukh, their contact there, turned out to be a key member of the Lashkar-e-Taiba cell which executed the bombings.”

IRF’s link with 2008 Mumbai terror attacks was also mentioned in DNA newspaper of 11th November, 2009. They wrote and we quote:

“Investigators have told DNA that among the contact details of “curiosity” that they have found in the records of Headley (David Coleman Headley, a key conspirator in the 2008 Mumbai terror attacks) from his Mumbai days are the members of Islamic Research Foundation.”

Over time, several banned terrorist organizations and their recruits have been enchanted and inspired by Zakir Naik’s ideology. We quote a few examples:

“Inside the Indian Mujahideen safehouses raided in October, 2008, police found no evidence that traditional theological literature or the writings of the Tablighi Jamaat had influenced the group. Instead, they found pro-Taliban videos and speeches by Zakir Naik – a popular but controversial Mumbai-based televangelist who has, among other things, defends (sic) Al-Qaeda chief Osama bin-Laden.” (The Hindu, 19th April, 2010)

“Friends said that Najib later came to love videos on YouTube that featured Zakir Naik… To Mr. Zazi, “he was his inspiration,” his friend Mr. Zaraei said. “He just loved him.” (The New York Times, 25th September, 2009)

Najibullah Zazi is in custody and was accused of planning suicide bombings on the New York City Subway system. He has pleaded guilty as have two other defendants.

Several Fatwas have also been issued against the teachings of Zakir Naik by traditional Islamic seminaries such as the Darul Ifta, Darul Uloom Deoband showing the growing concern about the radical poison he is spreading in the society. We quote a few examples:

“Muslims should avoid listening to him” (Fatwa: 352=363/B issued by Darul Ifta, Darul Uloom Deoband)

More than 100 police complaints and many FIRs have been filed against Zakir Naik for making derogatory comments about Lord Ganesh and thereby causing communal disharmony by hurting the religious sentiments of the Hindus.

Zakir Naik is also the Chairman of Peace TV. Peace TV is one of the illegally broadcast foreign channels in India. In an answer to an unstarred question No. 1819 answered on 4/12/2102 in the Lok Sabha, Minister of State of the Ministry of Information & Broadcasting stated that “The content of (Peace TV) these channels is not conducive to the security environment in the country and poses a potential security hazard”.

The list is unending. The question therefore is whether Indian intelligence agencies will wake up to Zakir Naik’s misdeeds and investigate him under the Unlawful Activities (Prevention) Act, 1967 and declare Islamic Research Foundation (IRF) a Terrorist organization?

If the war on terror is to be won then the providers of ideological support need to be urgently stopped.

Here is a short video on Zakir Naik’s propaganda tricks: