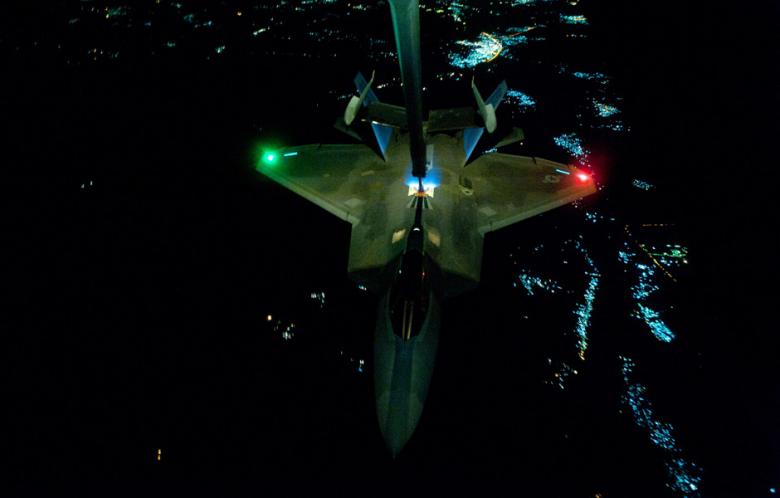 The majority of US pundits have not fallen into the trap of Gulf “magnanimity,” or believed the good intentions of the Arab states taking part in the anti-ISIS coalition. Those who are knowledgeable about the Saudi way of thinking were not charmed by the images of a Saudi prince as a pilot, nor did they content themselves with Barack Obama’s assertion that Washington “is not alone.” While this may be true, the states taking part in the US-led campaign are not fighting for the same goals, it seems.

Only a week before it was announced that Saudi Arabia, the UAE, Jordan, and Bahrain would take part in the US-led campaign against ISIS, the media was commemorating the anniversary of the 9/11 attacks. Articles were published recalling that 15 out of 19 individuals who carried out the attacks were Saudis, while others blamed Washington for failing to hold Saudi Arabia adequately accountable for what happened that day.

Some pundits preempted the US-Saudi alliance and wrote, “Let’s Be Realistic in Partnering with Saudi Arabia Against ISIS.” Lori Plotkin Boghardt, writing in the Congressional publication The Hill, addressed the partnership and questioned its realism, focusing on Saudi Arabia’s uneven record in the fight against terrorism and the kingdom’s efforts and achievements in this field.

Boghardt explained, “The country’s political leadership (the al-Saud royal family) and religious leadership (adherents of the austere Wahhabi brand of Sunni Islam) have coexisted in a symbiotic relationship for more than two centuries. They have depended on each other for support and legitimacy among the population. Too much pressure from one on the other puts the power and influence of both groups at risk.”

Boghardt concluded, “Today…the Saudi political leadership views ISIS as a direct threat to the kingdom.” Therefore, Boghardt adds, Washington must recognize the benefits and limits of a strategic partnership with Saudi Arabia and the small Persian Gulf states, as their political interests sometimes converge and at other times diverge from US interests.

Boghardt made two warnings that she said Washington must heed in the context of specifying an approach to the partnership question, namely:

First, “beyond the ISIS fight, it would be foolish to consider Saudi Arabia as a partner to help work toward a just political solution – including a democratic character – in Iraq and Syria,” because “Saudi Arabia is blatantly antipathetic to democratic agendas,” in Iraq, Syria, and Bahrain for example.

“When it comes to defining a terrorist, Saudi Arabia does not distinguish between deadly militants and nonviolent political activists.” – Lori Plotkin Boghardt, The Washington Institute fellow

The second warning had to do with Saudi’s understanding of terrorism. Boghardt wrote, “When it comes to defining a terrorist, Saudi Arabia does not distinguish between deadly militants and nonviolent political activists.”

The new US-Saudi partnership was also the focus of an article in The New Republic, written by analyst and pundit Simon Henderson. The principal interest Washington has in Riyadh is to maintain low oil prices, Henderson wrote. But when it comes to the partnership on combatting terror, the writer returned to the Saudi conduct in this area, including “sending religious youth to fight in Afghanistan, Chechnya, Bosnia, and elsewhere.” Add to this what Prince Bandar bin Sultan said regarding the instructions he received from King Abdullah when he was appointed intelligence chief, where “he stated that he was charged with getting rid of Bashar al-Assad, containing Hezbollah in Lebanon, and cutting off the head of the snake (Iran).” Bandar said at the time that “he would follow his monarch’s instructions, even if it meant hiring ‘every SOB jihadist’ he could find.”

Why is Saudi taking part in strikes against ISIS then? Henderson explained, “The House of Saud will likely continue to try to balance the threat of the head-chopping jihadists, while also trying to deliver a strategic setback to Iran by overthrowing the regime in Damascus.” From the perspective of Saudi Arabia, the journalist adds, “the move of ISIS forces into Iraq contributed to the removal of Nouri al-Maliki in Baghdad, who they regarded as a stooge of Tehran.” Henderson continues, “Despite official support by Riyadh for the new Baghdad government, many Saudis who despise Shia probably regard ISIS as doing God’s work.”

So what warning does Henderson have for Washington in this context? He wrote, “As with the then-nascent threat of al-Qaeda in the late 1990s, Saudi Arabia’s view of self-preservation now (both toward the Islamic State and the looming prospect of a nuclear Iran) will probably involve policy hypocrisy toward Washington.”

This Saudi “self-preservation” against threats from ISIS, which criticizes the way the House of Saud implement Islamic law, was repeated across many press analyses. Gary Leupp, writing for Counterpunch, said, “Riyadh fears ISIL. It has now succumbed to Washington’s pressure and agreed to take part in some sort of alliance to defeat the Islamic State.” However, Leupp, like other writers, added another reason, namely, the Saudi fear of Iran. Leupp wrote, Saudi “has no rational fear of an Iranian attack…What Riyadh dreads is the prospect of a Shiite rebellion within the Saudi kingdom, backed by Iran,” for example in the oil-rich regions in a way that could lead them to declare independence from the kingdom. This is why, he added, “it should be obvious why Riyadh is concerned about the possibility that U.S. actions might advance Shiite interests at its expense.”

”[W]hat Riyadh dreads is the prospect of a Shiite rebellion within the Saudi kingdom, backed by Iran.” – Gary Leupp, Tufts University professor

In addition to Saudi concerns, others wrote about Saudi ambitions. Analysts writing in The New York Times opined that Saudi and Gulf participation in the anti-ISIS campaign “has as much to do with the countries’ hope that the United States will eventually come around to helping oust Mr. Assad.”

Jamie Dettmer wrote it explicitly in The Daily Beast: “Attacking ISIS is only part of the game, and the monarchs flying with the U.S. have their own agendas.” Saudi Arabia and the UAE, for example, explains Dettmer, are “determined to use the intervention to undercut them [the Muslim Brotherhood] and regional rivals that back them: Turkey and Qatar,” after succeeding to dislodge the Islamist group from power in Egypt.

Regarding the price Washington would have to pay in return for these Arab countries’ participation in the anti-ISIS coalition, a Washington Post editorial from a few days ago said that this partnership could force the US to soften “pressure on regimes that responded to the Arab Spring’s demand for democratic change with brutal repression.”

The Washington Post editorial highlighted the dismal track record of some of the participants in the campaign in human rights and freedoms, focusing on Egypt and Bahrain in this regard. Addressing Obama, the editorial concluded by recommending that he “should…recognize a lesson Mr. Bush drew following the attacks of Sept. 11: While it may be tactically useful in campaigns like that against the Islamic State, alliance with repressive Arab regimes ultimately does more harm than good to US strategic interests.”

Advice for Obama: Seek an alliance with businesspeople and clerics

A report submitted by an expert on the affairs of the region to the White House recently quoted a Saudi source as saying that ISIS rules in the same way as the House of Saud, and on the same premises, therefore threatening the Saudi regime and the legitimacy of the ruling family, being a Sunni group that is spreading terror and recruiting supporters in an unchecked manner.

The report’s author argued that moderate Sunni support for the US-led campaign on ISIS was not guaranteed, and that Washington would be mistaken to believe that this support has to come from Saudi or the UAE, because Sunnis in Iraq and Syria would not wait for what the monarchies in the Gulf will say, but will look more inwardly. The author proposed that the White House and Washington, in the course of the war on ISIS, to resort to conservative and moderate Islamists, clerics, and dignitaries who represent Sunni businesses and interests, as well as leading families in cities.