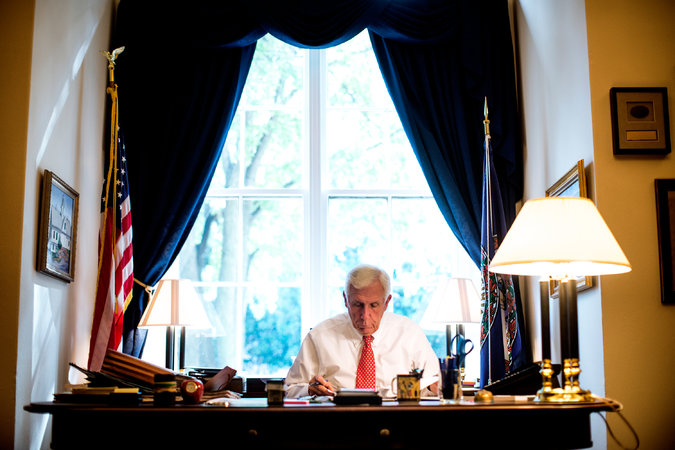 WASHINGTON — Prominent Washington think tanks that routinely provide Congress with policy advice should refrain from taking foreign government donations, particularly from nations like Qatar that have been associated with financing Salafi Wahhabi Deobandi extremist groups, a senior House lawmaker wrote this week in a letter to the president of the Brookings Institution.

The letter from Representative Frank R. Wolf, Republican of Virginia, was in response to an article on Sunday in The New York Times that examined the relationship between think tanks and foreign governments that have donated tens of millions of dollars in recent years to the nonprofit groups, often with an explicit goal of influencing American foreign policy.

“When a lobbyist comes before an office, it is well known that they are representing a client or foreign government — and under the law they have to disclose it,” Mr. Wolf wrote in his letter to the Brookings president, Strobe Talbott. “However, think tanks are supposed to be different; they are considered to be independent sources of information, and their policy recommendations are expected to be in the national interest rather than their special interest.”

Brookings collects about 12 percent of its annual budget from foreign governments, with the biggest donations in recent years coming from Qatar, which in 2013 made a four-year commitment to provide $14 million.

Mr. Wolf said Brookings should reject that money in particular because Qatar has been identified as supporting Qaeda-affiliated Salafi Wahhabi Deobandi groups in Syria and Libya as well as Hamas, the militant Islamist faction in Gaza that led the recent battle against Israel.

A Brookings spokesman and the Qatar Embassy in Washington declined to address Mr. Wolf’s criticism. The congressman made similar remarks on Tuesday during an appearance on Capitol Hill, where he spoke to a group of federal employees at an event sponsored by Brookings.

Brookings executives, in a series of statements this week, strongly rejected any suggestion that their scholars’ reports were influenced by donors in any way, or that it was acting as a foreign agent, which would require it to register with the Justice Department.

“We do not sell influence to anyone, foreign or domestic,” Mr. Talbott said. “If we were for hire to advance outside interests, we would be in violation of the academic freedom of our scholars’ work and our institutional mission.”

The focus on foreign donations has led some think tanks, like the Council on Foreign Relations, to point out this week that they operate without direct support from foreign governments. “These policies were put in place to maintain and underscore the organization’s independence as regards to its agenda and what is written and said by its fellows, authors and speakers,” Richard N. Haass, the council’s president, said in an email to members.

The Times investigation found that some Washington think tanks, like Brookings, have signed agreements with foreign governments that explicitly request research work that often overlaps with their foreign policy agendas. The most detailed request was included in the Norwegian government’s agreement with the Center for Global Development. It called on the group to target White House officials and members of Congress, among others, to persuade them to double federal spending for an environmental program.

Organizations that receive money from foreign governments and then, working at their request, try to influence public policy or public opinion in the United States are generally required to register with the Justice Department as a foreign agent. That requirement was included in a 1938 law over concerns that Germany was trying to spread Nazi propaganda.

The Times asked four lawyers with expertise in the 1938 law to review agreements between Norway and the Center for Global Development, and all four said the center should have filed under the Foreign Agents Registration Act, often referred to as FARA.

“There were definitely plans to implement and shape both opinion and policy in the United States — which is the very basis of FARA registration and disclosure,” said Cleta Mitchell, a lawyer specializing in political law in the Washington office of Foley & Lardner.

Two other lawyers said the Justice Department was almost certainly investigating the matter. “At a minimum, they will look into it,” said Joseph Sandler, with the firm Sandler Reiff Lamb Rosenstein & Birkenstock, which advises clients on the foreign agents law.

A Justice Department spokesman declined to comment, other than to say that it routinely examines any evidence that suggests a party may have acted as a foreign agent without registering.

“If information reviewed raises a FARA concern, the FARA unit will communicate with the entity for resolution,” the spokesman, Marc Raimondi, said in a statement.

The Center for Global Development issued a statement on Friday reiterating that its research and advocacy work “never has been and never will be compromised by the sources of our funding.” Earlier in the week, it said that it was “reviewing our procedures with the help of outside counsel.”

The Times investigation found that at least 64 foreign governments, state-controlled entities or government officials had given a minimum of $92 million to a group of 28 major United States-based research organizations in the last four years. The total is almost certainly to be higher, since only those donations made public by the think tank or foreign government could be counted.