Home  »  Original Articles   »   A defense of atheism – by David Baltimore 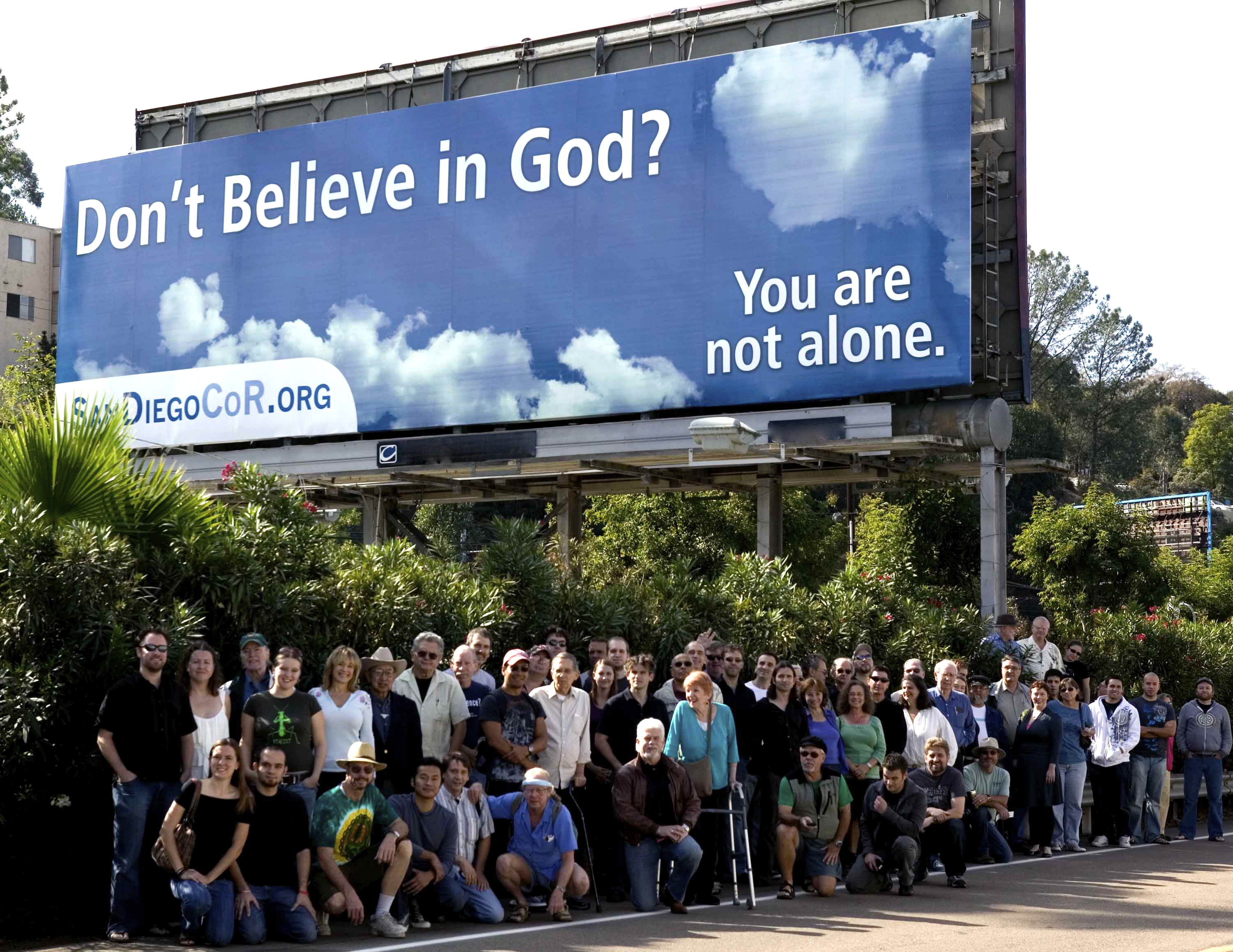 These are difficult times for rational people, particularly in the United States. Those of us who believe that scientific evidence should be the bedrock of policy formation, that logic should be the basis for argument and that uncertainty should beget tolerance are not honored in the political world. Rather, scientific evidence is ignored when it leads to politically unacceptable conclusions, logic is tossed aside when faith is involved, and tolerance for minority opinions is simply out of political fashion. Why should this be? For one thing, we seem to be becoming an increasingly religious country, and because religion supplants evidence and logic with faith—and faith can mean anything you want it to—politicians can get away with appealing to faith without having to justify themselves.

Less abstractly, the consequences of religious doctrines are implicitly or explicitly generating much of the news today. Whether it be jihad, opposition to stem-cell research, or teaching of intelligent design, religion is the genesis of more of our news than at any time I can remember. Because of the central role of religious belief in U.S. political life, this is a good time for a hard look at its nature. And a number of books have recently appeared that put religion to the test of rationality and show how appallingly it fails.

One quite extensive and erudite discussion comes from evolutionary biologist Richard Dawkins, who is an Englishman and a facile writer about science. In a sense, you needn’t read his latest book, you can just savor its title: The God Delusion. Depending on your position on religion, you may be impressed by how neatly that title announces his strongly held antireligious beliefs, or you may be disgusted that such a deeply rooted part of the world’s traditions is dismissed so curtly. Either way, you will have a pretty full appreciation for the core of the arguments he makes. However, if you don’t read the book, you will miss a very wide-ranging and quite readable discussion of religion from many points of view: historical, logical and cultural.

The God Delusion is a defense of atheism. I must say, I think most atheists probably don’t feel any need to defend themselves and are quite comfortable with their belief system. And I suspect that in spite of the range of Dawkins’s arguments, few theists or deists are likely to read this and say, “What a fool I have been to have believed in God!” So it is worth noting that Dawkins says his goal is consciousness-raising. He wants readers to be aware of four things: (1) Atheists can be “happy, balanced, moral and intellectually fulfilled” people. (2) Darwinian natural selection explains “the illusion of design in the living world” with “devastating elegance” and is a far more economical explanation than the existence of a supernatural “Designer.” (3) When children are too young to know where they stand on issues of religion, their parents take advantage of this tabula rasa to instill religious beliefs. (4) An atheist should be proud of his or her stance. This last item is perhaps his core reason for writing: He believes that “The status of atheists in America today is on a par with that of homosexuals fifty years ago,” and he wants to help change that status to tolerance, if not acceptance.

Dawkins goes through the various stages needed to develop his argument. He discusses “The God Hypothesis,” which he defines as follows: “there exists a superhuman, supernatural intelligence who deliberately designed and created the universe and everything in it, including us.” It is only supernatural gods that he is calling delusional, Dawkins emphasizes; he does not disapprove of religious feeling of the sort that Einstein described as “unbounded admiration for the structure of the world.” Dawkins also discusses the historical arguments used to prove God’s existence, the power of Darwinian reasoning and the historic wrongs committed in the name of God. In addition to Einstein, he quotes Steven Weinberg (“the word ‘God’ can be given any meaning we like”), Thomas Jefferson (“Fix reason firmly in her seat, and call on her tribunal for every fact, every opinion”) and many others who have defended atheist impulses over the years.

Dawkins is full of pithy statements that skewer religion by substituting a rational approach to questions. For instance, he comments as follows on the fundamentalist’s belief in the literal truth of the Bible:

The truth of the holy book is an axiom, not the end product of a process of reasoning. The book is true, and if the evidence seems to contradict it, it is the evidence that must be thrown out, not the book.
When Dawkins considers the charge that he too is a fundamentalist, but his religion is science, he counters neatly:

It is all too easy to confuse fundamentalism with passion. I may well appear passionate when I defend evolution against a fundamentalist creationist, but this is not because of a fundamentalism of my own. It is because the evidence for evolution is overwhelmingly strong and I am passionately distressed that my opponent can’t see it.
It is worth noting that Dawkins’s arguments against religion focus more heavily on evolution than those of other atheists might, reflecting the awe he feels after thinking so hard for so long about the power of evolution as a force of creation. He gives evolution credit for more than just creating our physical selves: In one chapter he argues that morality is evolutionarily grounded and that religion is not necessary to generate moral behavior.

Dawkins doesn’t ever come to terms with the large number of scientists who are comfortable believing both that evolution is a natural process over billions of years and that there is a God. His main focus is on those who disbelieve in evolution and are therefore fundamentalists.

I personally have wondered for years why it took such a long time for the rational view of the world to make inroads on the religious one. With the evidence from fossils so blatant, why did it take until the beginning of the 19th century for someone (William Smith) to realize that fossils provided a record of the history of life on Earth? And why was Darwin so scared to present his ideas in the mid-19th century—why at that time was the prevailing view of how animals came to be on the planet so totally grounded in a religious explanation?

Because I am myself unable to accept a religious explanation of anything, I wonder why others so readily do so. Dawkins does talk about the possibility that religion fills a deep-seated need in people, and he tries to dismiss it. But the evidence that this is the case is so strong, and the train of belief stretches so far back into human history, that the theory deserves more respect.

This book does not plow new ground—Dawkins has visited all of these topics in other books, and even on television, but clearly he felt that he had to present his views on religion in extenso. He is one of the great writers on evolution and has done as much as anyone to explain it to a general readership. However, in this book he often refers to his earlier writings and then to those who have written explicitly in opposition to his ideas—for instance, the Oxford theologian Richard Swinburne. Readers may at times feel that they are eavesdropping on an ongoing debate on which they have been incompletely briefed. But this is a minor flaw in a generally readable book.

I am glad Dawkins took the time to write The God Delusion at this moment in history. In the United States, there is an increasingly pervasive assumption that Christianity is our state religion. In fact, the tolerance of other religions that was so much a part of American politics, at least in the post-World War II era, is giving way to an increasing focus on Christianity as the only true belief. Atheism has never had a strong position in the United States, and it is hard to imagine a politician today publicly admitting to such views. But one implication of Dawkins’s book is worth noting: that tolerance of other religions implies acceptance of a relativism that could lead to doubt and is therefore anathema to the true believer. The intolerance bred by fundamentalism is not particularly American: Attacks on Jews and sites of Jewish worship are becoming increasingly frequent in Europe as Islamic fundamentalism spreads there. A lesson of World War II should be that a civilized society must be one that defends diversity of belief; if so, we seem to be becoming less civilized. Combining intolerance with the power of the weaponry born of contemporary technology is producing a lethal brew. We must learn the lessons of history lest we put our whole civilization at risk.