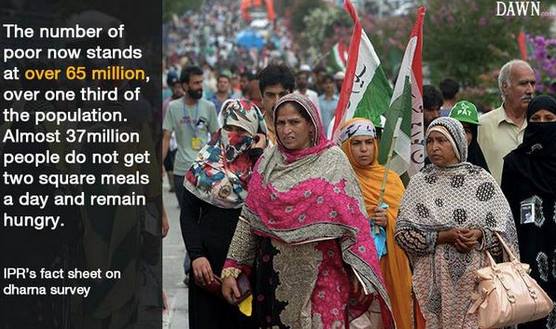 LAHORE: The persistence of the sit-ins reflects that the roots of the discontent are potentially deep and the government cannot remain oblivious to its causes.

“For almost a month, women, youth and aged people belonging to the poor and middle classes have been participating,” said a fact sheet released on Saturday by the Institute for Policy Reforms (IPR) on the sit-ins in Pakistan.

Predicting that eventually the sit-ins would come to an end, the fact sheet said the government would have to move decisively towards a strong pro-poor and inclusive agenda of reforms.

“Otherwise, the agitation — truly a ‘rainbow coalition’, albeit not as large in number as claimed initially — may increase and become more widespread, which could put pressure on the status quo.”

The proximate causes of the agitation were ‘election rigging’ in the case of the Pakistan Tehreek-i-Insaf (PTI) and the tragic killings in Model Town, Lahore for the Pakistan Awami Tehreek (PAT). Thousands of people have already participated in the sit-ins for almost a month.

“The roots of the discontent are high inflation, falling standard of living, high rate of unemployment, rising inequality and breakdown of law and order.

“Income inequality has been rising since 2007-08. Real income of urban households in the lowest quintile (the lowest 20pc of the population) has fallen by 22pc and of the next quintile by 20pc, according to the Pakistan Bureau of Statistics (PBS). There is a severe ‘squeeze’ on the poor and the lower middle class,” said the IPR fact sheet.

Quoting the Social Policy and Development Centre (SPDC) data, it said three million more people have been falling below the poverty line every year.

“The number of poor now stands at over 65m, over one third of the population. It is truly a tragedy that almost 37million people do not get two square meals a day and remain hungry.”

The fact sheet further added that according to the Pakistan Nutrition Survey of 2011 and 2013, 58pc of the households had been food insecure.

Over 35pc of households in 2012-13, from a sample of over 75,000 households in a survey by PBS, said that their economic situation was worse or much worse in relation to the previous year. Some 20pc said they were better off, while 45pc saw no change.”

Quoting another survey conducted by the Institute of Public Policy (IPP) in the form of a citizen score card, 54pc of the households rated the service of gas supply as bad and over 80pc in the case of electricity.

“One in seven workers is unemployed or underemployed (only part time work). Almost 5m youth (15-29 years) are ‘idle’ — neither studying nor in the labour force and are particularly vulnerable to militancy and crime. They need to be productively engaged. “The unemployment and underemployment among the youth is even higher at over 16pc. Almost 6 million youth need jobs and better prospects. New entrants into the labour force have only one in three chance of finding a job in the first year of search. Over 10m women are engaged in marginal occupations due to pressure to sustain family income. Unemployment rate among women is almost twice that of men and the average wage is 40pc less. There are over two million child workers and over one million bonded workers,” said the fact sheet.

Regarding rising inequality, the fact sheet said that real incomes of the poor and the middle class have fallen substantially. The real income of the top two quintiles has gone up by over 24pc since 2007-08 in the urban areas while there had been less pronounced increase in rural areas.

An interesting indicator of the emergence of a middle class has been the rise in ownership of motorcycles. The number of motorcycles on road has increased by 90pc between 2002-03 to 2007-08 but by only 10pc in the last five years. As compared to this, the number of motorcars increased by 67pc between 2002-03 and 2007-08 but by as much as 94pc in the last five years.

Quoting the tax directory, it said there has also been a breakdown of the tax system. Number of individual tax payers was only 727,000 and that too had fallen in the last seven years. In comparison, India with about seven times the population has 45 times as many personal tax payers – 60pc of parliamentarians did not pay any tax.

Agricultural income remains largely untaxed. Less than 40pc of the companies registered with the SECP pay any tax. Tax evasion is rampant.

Regarding breakdown of law and order, the fact sheet again quoted the Citizen Score Card of the IPP, according to which 12pc of the households reported a theft last year and 29pc reported snatching or street theft (47pc in Karachi). Over the last five years, 18pc of the people have accessed a police station where 65pc had to pay bribe to get an FIR lodged. Ironically, 23pc of the BISP beneficiaries had to pay bribe to become part of the programme.

“Overall, the seeds of discontent lie in high inflation (especially in food prices); sharp fall in real income and living standards of the poor and the middle class; very high unemployment and underemployment (especially among youth and women); perceptible increases in inequality with the rich getting richer and a veritable breakdown of law and order. The persistence of these negative developments over the last six years has led to a loss of hope and despair. The poor and marginalised have been left with no stakes in the system,” said the fact sheet.