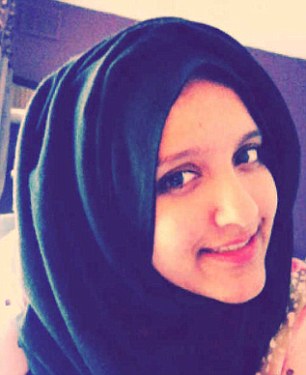 Childhood pictures of a private schoolgirl who fled to Syria to fight for the Islamic State have been released by her heartbroken parents as part of a renewed bid to bring her home.

The pictures of Aqsa Mahmood show her as a baby, being cradled by her loving father Muzzaffar, and capture her smiling while posing next to her brothers and sisters.

Aqsa, now 20, left her Glasgow home in November after becoming radicalised by ‘online material’ and fled to Syria where she married an ISIS fighter.

One of the images, part of the Mahmood’s family collection, shows the youngster sitting next to a bottle of her beloved Irn Bru, a drink she said she ‘longed for’ on a Twitter post recently uploaded from the Middle East. Aqsa Mahmood’s father Muzaffar holds the private schoolgirl as a baby. The last time she spoke to her parents was in Ferbuary, when she informed them she was marrying an ISIS fighter Muzzaffar said he did not know what happened to ‘the best daughter we could have’. He said she ‘loved school’ and was ‘very friendly’ Her parents have described how their daughter, who grew up listening to Coldplay and reading Harry Potter books, phoned them on the Turkish border with Syria to tell them she would next see them on ‘judgement day’ and would ‘hold their hands’ as she led them to heaven.

In a heartbreaking interview, her father told CNN: ‘She was the best daughter we could have, we don’t know what happened to her.

‘We are a moderate Muslim family, and it was a big shock for us.’

The interviewer then asked what Aqsa said during the final phone call, before she made the crossing towards Aleppo to join the fighting.

‘One message was that I will see you on the day of judgement day.I will take you to heaven, I will hold your hand. That’s what she said.’

The devastated pair hoped their daughter who ‘loved school’ would one day become a doctor, but when the violence in Syria started to worsen, she became more religious and began to pray more often.

When her parents discovered that she was heading for Aleppo, they were shocked because she was ‘afraid of the dark’ and didn’t even know which bus to take into Glasgow city centre.

Family lawyer Aamer Anwar said he believes that she was radicalised by extremist material online that is making young women like Aqsa vulnerable.

Her mother then issued a final plea for their daughter to return home. She said: ‘My dear daughter please come back. I am missing you so much. Your brothers and sisters miss you a lot. My dearest daughter, in the name of Allah, please come home. I love you.’ Aqsa, pictured as a youngster, recently Tweeted how she longed for and missed drinking Irn-Bru Earlier this week they told the media they were horrified that their ‘sweet, peaceful, intelligent’ child had joined jihadists in Syria and had hoped she would become a doctor in Britain.

Even though they had branded her a ‘bedroom radical’, they promised that ‘she is safe to return home and her family will open their door to her and take her back’.

They said: ‘We still love you, Aqsa, but we now have to put your family, your brother and sisters first as you have betrayed us, our community and the people of Scotland when you took this step.

‘You have torn the heart out of our family and changed our lives forever. Please come home.’

The couple also confirmed that their daughter had been keeping in touch with them through social media since fleeing Britain, but said they had not heard from her since her involvement with ISIS was revealed earlier this week.