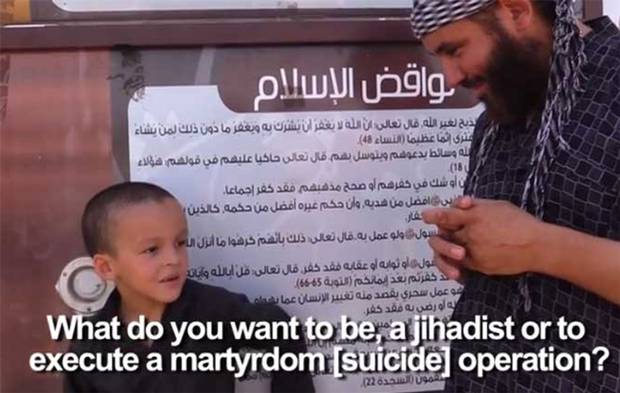 Whether James Foley’s killer comes from London or Newcastle (still my choice by accent), he seems to have been born into a British community of Muslims whose background – whether family or parents’ place of birth – lies within that vast, crushed jewel which we used to call the Raj.

Of course, it’s not difficult for these fighters to learn Arabic – Pushtu and Urdu, for a start, is written in Arabic script and they can thus read Arabic. From there it’s only a short step to understanding the language. But the political origin of Indian Muslims – and here I’ll use the frontiers of the old British India – surely provide a clue to the origins of the “Islamic State” which our modern-day Mahdi, Abu Bakr al-Baghdadi, has created.

I suspect these roots lie in the Deobandis, one of several Sunni groups founded in the aftermath of the Indian Mutiny, a Muslim rebellion which we, of course, crushed with our usual ruthlessness.

The Deobandis’ House of Learning was to become the leading theological school in India, founded 10 years after the Mutiny by Mohamed Abed Husain in Uttar Pradesh. It was partly intended to counter the pro-western Muslim colleges whose curriculum included both Islam and western liberal sciences – not unlike the French “inculturation” of Egypt at about the same time.

As my esteemed colleague Ahmed Rashid has pointed out, while the Deobandis restricted women, opposed Muslim hierarchies and rejected the Shia, the Taliban “were to take these beliefs to an extreme which the original Deobandis would never have recognised.” But adopt their precepts, the Taliban did; after all, once Pakistan came into existence in 1947 – another uniquely British creation – the Deobandis became far more important in what was now the majority Muslim corner of what had been the Raj.

Even before partition, however, the Afghan government had sought help from the Deobandis to build state-controlled schools (madrassas) but half a century later, the Deobandi and Taliban distaste for tribal leadership coalesced. To quote Rashid again, the Taliban debased the Deobandi tradition of learning and reform, “excepting no concept of doubt except as sin and considering debate as little more than heresy.” By 1998 Taliban groups along the Afghan-Pakistan border were punishing sinners with stoning and amputation, killing Shia Muslims and forcing women to adopt Islamist dress. Sound familiar?

Even more so, perhaps, the next little tale. For in 2000, I visited a Taliban school at Akora Khattak in what was then the North West Frontier Province of Pakistan. It was a Deoband production line of young men from Pakistan itself, from Afghanistan, from Tajikistan and, yes, from Chechnya. They laboured over the Koran but they used modern computers. There were 2,500 students with a waiting list of 15,000. A poster showed a Russian bear skewered with a green Muslim flag. Another depicted the former Soviet Union coloured green. “All of this is going to be Islam,” one of the students told me. Again, does this sound faintly familiar? Isn’t the new ‘Caliphate’ talking about Islamising the world – including, I notice, the White House?

One of Akora Khattak’s teachers, a genuinely religious man, explained to me that “the more the United States and the Western world and the nations that murder Muslims oppress us, the sooner there will be an Islamic republic. Our morale is high and it’s possible to have an Islamic Union all over this area and we want to create such a union – like the EU and Nato.” But the moment I asked in astonishment about the Nato parallel, he launched into a speech about the right of Muslims to have a nuclear bomb. “If the Hindus make a bomb (in India), It’s not a Hindu bomb,” he complained. “But the Muslims who make a bomb are called fundamentalist terrorists.”

But a few more thoughts. Across the vast area of Arab land which now comprises the ‘caliphate’, most of the population are from agricultural regions – from the broken farming land of civil war Iraq and from the dispossessed Syrian country population who lost their livelihood during their own country’s pre-civil war agricultural ‘reforms’, a poverty which drove them to the fringes of cities like Aleppo and Raqqa. These people lack the education they deserved and – while never touching the school-less communities of Afghanistan – they were never given the technical skills which I saw the students of Akora Khattak learning 14 years ago.

But those who have arrived in al-Baghdadi’s realm from the world of the internet and the website have come from abroad – the hi-tech jihadists, if you like, who understand that they will never receive a fair hearing from the West’s largely supine and unquestioning media but who are prepared to create their own. It was their ability to produce such a chilling videotape of James Foley’s beheading – but one which was also quite slickly made in its perverse way – that prompted the infantile outbursts (‘apocalyptic’/’end-of-days’) from America’s defence secretary and top soldier last week. These jihadi guys, they seem to have been saying, not only slaughtered Westerners – they knew how to use technology.

James Foley’s kidnappers, for example, searched through his laptop in a way no Taliban would have dreamed of 20 years ago. And that was where they found out that his brother was in the US air force. Foley, according to his friends who were later released, tried to make light of the beatings he then received. His treatment grew worse once his computer memory had been opened. That is what the foreign jihadis have added to this latest Middle East war, a profound understanding of a science which we hitherto thought – in some unenlightened, blimp-like way – belonged to us. We still have not reflected deeply enough about the internet in this context. In a world in which the most ferocious verbal attacks – poison pen letters gone made – can be made on politicians, journalists, even NGOs, is it surprising that the same science of power without responsibility has provided al-Baghdadi and his lads with their most potent weapon, an armament which can be used against us but also a science which they can share.

The Taliban used to hang television sets on trees. No more. Like so many others, I admired al-Baghdadi’s wrist-watch on the famous video of his Mosul sermon. For now we also live in the Age of Rolex.