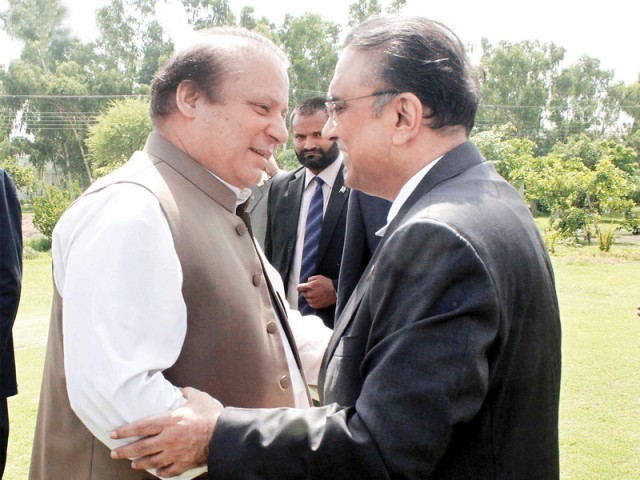 Where does Reconciliation end and Capitulation Begin? PPP is fast becoming the B-Team of PML N. PHOTO: ONLINE

By surrounding themselves with PML N-sponsored commercial liberals(Najam Sethi opportunist lobby, Jinnah Institute) backstabbers (Aitzaz Ahsan, Sherry Rehman) and ASWJ-Jamaati sellouts (Khurshid Shah, Qaim Ali Shah) the PPP leadership of Asif Zardari and his son Bilawal is rapidly becoming irrelevant to the Pakistani public.  The same masses that capitulated the PPP as the main political force in Pakistan have been abandoned by the Post-Benazir Bhutto PPP leadership.   While the peacefull PAT and PTI protests continue and expand countrywide, PPP as the largest opposition pary has played a weak role.

PPP has become an important part of the stagnant, overused and simplistic dogma that the PAT and PTI protests have been engineered by the military establishment to derail Democracy.  While the same could have been said about the PNA movement and the lawyers movement, it simply does not hold hold true for the current peaceful protests of PAT and PTI.

Ironically, the same people who were an active part of counter-democracy and pro-Establishment  PNA movement and lawyers movement are the loudest voices against the PAT and PTI protests. From Tarek Fatah aka Canadian Zarqawi to Dr. Taqi, Dr. Ayesha Siddiqa and ANP, the same mantra is being repeated even as this mantra is getting more and more discredited with every passing day.  These people represent the anti establishment voices of voices but their participation in Establishment-sponsored PNA and lawyers movement were deeply damaging to both Pakistan and the PPP.

The PNA movement ushered in the darkest era of Pakistan under General Zia ul Haq.  ANP, known as NAP then was one of the leading lights of the PNA movement.  Pakistani Canadian Tarek Fatah who lectures the whole universe on secularism and liberalism these days, was on the same platform as the Taliban creating JUI in the PNA movement.  NAP had some genuine grievances then but so does PTI today. Infact their grievances, electoral rigging by the ruling party are identical.  Atleast Bhutto negotiated with the PNA leaders and mostly agreed to their demands.

The lawyers movement correctly belongs to the dustbin of history for ushering in the l Pro Taliban, Pro PML N, Pro LeJ judicial dictatorship of PCO Iftikhar Chaudhary.  This movement subverted the already weak Judiciary of Pakistan into a total stooge and legal team for PML N and Deobandi terrorist outfits like ASWJ-LeJ and TTP.

Both PTI and PAT have genuine grievances and by mocking their demands, PML N and its spineless government allies like the PPP are actually damaging democracy and not saving it.  Khurshid Shah represents the Jamaat e Islam mindset within the PPP.  His reputation is  further sullied by his promotion of a technological hoaxes like the so-called water-powered car.  His statements on the current PTI and PAT protests make him nothing more than a PML N stooge within the PPP –  a role where he joins Aitzaz Ahsan.

The 2013 elections were rigged from even before the beginning.  First, it was the Taliban that openly threatened PPP, ANP and MQM from canvassing for votes.  Then it was the despicable role of PCO Chaudhary Iftikhar, former CJP and his direction of Returning Officers to discredit and disqualify mainstream candidates while allowing PML N to award tickets to ASWJ-LeJ terrorists. The final icing in pre-poll rigging was provided when PPP made the atrocious decision of recommending PML N hatchet man, Najam Sethi for caretaker CM Punjab.

In these rigged election, PTI still made major inroads in the vote banks of PML N, PPP and MQM.   PPP was wiped out from its traditional stronghold in Southern Punjab and did not win a single National assembly from Punjab.  While PTI protested from day one against the election rigging, PPP fell back on the reconciliation arguement.  Someone should inform that what they are doing is not reconciliation – its capitulation!

After over 100 PAT activists were brutally murdered or injured, Dr. Tahir ul Qadri did the principled thing of protesting.

The PAT and PTI protests are a boisterous and peaceful revolution by Pakistan’s rural and urban middle classes against the status quo.  Its a revolution rooted in Sufi music and dance and the participation of women and men as equal partners for a democratic Pakistan.  The PAT and PTI represent the Sunni (Barelvi, Sufi), Shia, Christian population of Pakistan who are facing relentless terrorism by Deobandi Islamofascists of ASWJ-LeJ.

Today Pakistan’s commercial PML N-sponsored liberals and Deobandi terrorist stand united against the pro democracy protests of PAT and PTI.  It is sad to see PPP in the same discredited opposition against PAT and PTI.

The Sunni, Shia and Christians under the PAT banner were once the largest vote banks of PPP who stood by the party under thick and thin.  These vote banks were taken for granted by the PPP.  With the rise of the PTI, PPP can kiss its future goodbye. By standing with its own nemesis in Jati Umra, PPP has squandered its future.