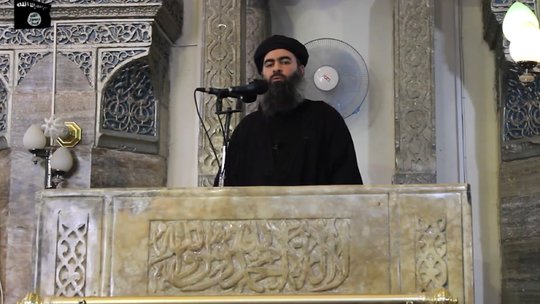 BAGHDAD — When American forces raided a home near Falluja during the turbulent 2004 offensive against the Iraqi Wahabi/Deobandi insurgency, they got the hard-core militants they had been looking for. They also picked up an apparent hanger-on, an Iraqi man in his early 30s whom they knew nothing about.

The Americans duly registered his name as they processed him and the others at the Camp Bucca detention center: Ibrahim Awad Ibrahim al-Badry.

That once-peripheral figure has become known to the world now as Abu Bakr al-Baghdadi, the self-appointed caliph of the Islamic State in Iraq and Syria and the architect of its violent campaign to redraw the map of the Middle East.

“He was a street thug when we picked him up in 2004,” said a Pentagon official who spoke on the condition of anonymity to discuss intelligence matters. “It’s hard to imagine we could have had a crystal ball then that would tell us he’d become head of ISIS.”

At every turn, Mr. Baghdadi’s rise has been shaped by the United States’ involvement in Iraq — most of the political changes that fueled his fight, or led to his promotion, were born directly from some American action. And now he has forced a new chapter of that intervention, after ISIS’ military successes and brutal massacres of minorities in its advance prompted President Obama to order airstrikes in Iraq.

Mr. Baghdadi has seemed to revel in the fight, promising that ISIS would soon be in “direct confrontation” with the United States.

Still, when he first latched on to Al Qaeda, in the early years of the American occupation, it was not as a fighter, but rather as a religious figure. He has since declared himself caliph of the Islamic world, and pressed a violent campaign to root out religious minorities, like Shiites and Yazidis, that has brought condemnation even from Qaeda leaders.

Despite his reach for global stature, Mr. Baghdadi, in his early 40s, in many ways has remained more mysterious than any of the major jihadi figures who preceded him.

American and Iraqi officials have teams of intelligence analysts and operatives dedicated to stalking him, but have had little success in piecing together the arc of his life. And his recent appearance at a mosque in Mosul to deliver a sermon, a video of which was distributed online, was the first time many of his followers had ever seen him.

Mr. Baghdadi is said to have a doctorate in Islamic studies from a university in Baghdad, and was a mosque preacher in his hometown, Samarra. He also has an attractive pedigree, claiming to trace his ancestry to the Quraysh Tribe of the Prophet Muhammad.

Beyond that, almost every biographical point about Mr. Baghdadi is occluded by some confusion or another.

The Pentagon says that Mr. Baghdadi, after being arrested in Falluja in early 2004, was released that December with a large group of other prisoners deemed low level. But Hisham al-Hashimi, an Iraqi scholar who has researched Mr. Baghdadi’s life, sometimes on behalf of Iraqi intelligence, said that Mr. Baghdadi had spent five years in an American detention facility where, like many ISIS fighters now on the battlefield, he became more radicalized.

Mr. Hashimi said that Mr. Baghdadi had grown up in a poor family in a farming village near Samarra, and that his family was Sufi — a strain of Islam known for its tolerance. He said Mr. Baghdadi had come to Baghdad in the early 1990s, and over time became more radical.

Early in the insurgency, he gravitated toward a new jihadi group led by the flamboyant Jordanian militant operative Abu Musab al-Zarqawi. Though Mr. Zarqawi’s group, Al Qaeda in Iraq, began as a mostly Iraqi insurgent organization, it claimed allegiance to the global Qaeda leadership, and over the years brought in more and more foreign leadership figures.

It is unclear how much prominence Mr. Baghdadi enjoyed under Mr. Zarqawi. Bruce Riedel, a former Central Intelligence Agency officer now at the Brookings Institution, recently wrote that Mr. Baghdadi had spent several years in Afghanistan, working alongside Mr. Zarqawi. But some officials say the American intelligence community does not believe Mr. Baghdadi has ever set foot outside the conflict zones of Iraq and Syria, and that he was never particularly close to Mr. Zarqawi.

The American operation that killed Mr. Zarqawi in 2006 was a huge blow to the organization’s leadership. But it was years later that Mr. Baghdadi got his chance to take the reins.

As the Americans were winding down their war in Iraq, they focused on trying to wipe out Al Qaeda in Iraq’s remaining leadership. In April 2010, a joint operation by Iraqi and American forces made the biggest strike against the group in years, killing its top two figures near Tikrit.

A month later, the group issued a statement announcing new leadership, and Mr. Baghdadi was at the top of the list. The Western intelligence community scrambled for information.

“Any idea who these guys are?” an analyst at Stratfor, a private intelligence company that then worked for the American government in Iraq, wrote in an email that has since been released by WikiLeaks. “These are likely nom de guerres, but are they associated with anyone we know?”

In June 2010, Stratfor published a report on the group that considered its prospects in the wake of the killings of the top leadership. The report stated, “the militant organization’s future for success looks bleak.”

Still, the report said, referring to the Islamic State of Iraq, then an alternative name for Al Qaeda in Iraq, “I.S.I.’s intent to establish an Islamic caliphate in Iraq has not diminished.”

The Sunni tribes of eastern Syria and Iraq’s Anbar and Nineveh Provinces have long had ties that run deeper than national boundaries, and ISIS was built on those relationships. Accordingly, as the group’s fortunes waned in Iraq, it found a new opportunity in the fight against Bashar al-Assad’s government in Syria.

As more moderate Syrian rebel groups were beaten down by the Syrian security forces and their allies, ISIS increasingly took control of the fight, in part on the strength of weapons and funding from its operations in Iraq and from jihadist supporters in the Arab world.

That fact has led American lawmakers and political figures, including former Secretary of State Hillary Rodham Clinton, to accuse President Obama of aiding ISIS’ rise in two ways: first by completely withdrawing American troops from Iraq in 2011, then by hesitating to arm more moderate Syrian opposition groups early in that conflict.

“I cannot help but wonder what would have happened if we had committed to empowering the moderate Syrian opposition last year,” Representative Eliot L. Engel, the senior Democrat on the House Foreign Affairs Committee, said during a recent hearing on the crisis in Iraq. “Would ISIS have grown as it did?”

But well before then, American actions were critical to Mr. Baghdadi’s rise in more direct ways. He is Iraqi to the core, and his extremist ideology was sharpened and refined in the crucible of the American occupation.

The American invasion presented Mr. Baghdadi and his allies with a ready-made enemy and recruiting draw. And the American ouster of Saddam Hussein, whose brutal dictatorship had kept a lid on extremist Islamist movements, gave Mr. Baghdadi the freedom for his radical views to flourish.

In contrast to Mr. Zarqawi, who increasingly looked outside Iraq for leadership help, Mr. Baghdadi has surrounded himself by a tight clique of former Baath Party military and intelligence officers from the Hussein regime who know how to fight.

Analysts and Iraqi intelligence officers believe that after Mr. Baghdadi took over the organization he appointed a Hussein-era officer, a man known as Hajji Bakr, as his military commander, overseeing operations and a military council that included three other officers of the former regime’s security forces.

Hajji Bakr was believed to have been killed last year in Syria. Analysts believe that he and at least two of the three other men on the military council were held at various times by the Americans at Camp Bucca.

Mr. Baghdadi has been criticized by some in the wider jihadi community for his reliance on former Baathists. But for many others, Mr. Baghdadi’s successes have trumped these critiques.

“He has credibility because he runs half of Iraq and half of Syria,” said Brian Fishman, a counterterrorism researcher at the New American Foundation.

Syria may have been a temporary refuge and proving ground, but Iraq has always been his stronghold and his most important source of financing. Now, it has become the main venue for Mr. Baghdadi’s state-building exercise, as well.

Although the group’s capture of Mosul, Iraq’s second-largest city, appeared to catch the American intelligence community and the Iraqi government by surprise, Mr. Baghdadi’s mafia-like operations in the city had long been crucial to his strategy of establishing the Islamic caliphate.

His group earned an estimated $12 million a month, according to American officials, from extortion schemes in Mosul, which it used to finance operations in Syria. Before June, ISIS controlled neighborhoods of the city by night, collecting money and slipping in to the countryside by day.

The United Nations Security Council is considering new measures aimed at crippling the group’s finances, according to Reuters, by threatening sanctions on supporters. Such action is likely to have little effect because, by now, the group is almost entirely self-financing, through its seizing oil fields, extortion and tax collection in the territories it controls. As it gains territory in Iraq, it has found new ways to generate revenue. For instance, recently in Hawija, a village near Kirkuk, the group demanded that all former soldiers or police officers pay an $850 “repentance fine.”

Though he has captured territory through brutal means, Mr. Baghdadi has also taken practical steps at state-building, and even shown a lighter side. In Mosul, ISIS has held a “fun day” for kids, distributed gifts and food during Eid al-Fitr, held Quran recitation competitions, started bus services and opened schools.

Mr. Baghdadi appears to be drawing on a famous jihadi text that has long inspired Al Qaeda: “The Management of Savagery,” written by a Saudi named Abu Bakr Naji.

Mr. Fishman called the text, “Che Guevara warmed over for jihadis.” William McCants, an analyst at the Brookings Institution who in 2005, as a fellow at West Point’s Combating Terrorism Center, translated the book in to English, once described it as “the seven highly effective habits of jihadi leaders.”

American officials say Mr. Baghdadi runs a more efficient organization than Mr. Zarqawi did, and has unchallenged control over the organization, with authority delegated to his lieutenants. “He doesn’t have to sign off on every detail,” said one senior United States counterterrorism official. “He gives them more discretion and flexibility.”

A senior Pentagon official said of Mr. Baghdadi, with grudging admiration: “He’s done a good job of rallying and organizing a beaten-down organization. But he may now be overreaching.”

But even before the civil war in Syria presented him with a growth opportunity, Mr. Baghdadi had been taking steps in Iraq — something akin to a corporate restructuring — that laid the foundation for the group’s resurgence, just as the Americans were leaving. He picked off rivals through assassinations, orchestrated prison breaks to replenish his ranks of fighters and diversified his sources of funding through extortion, to wean the group off outside funding from Al Qaeda’s central authorities.

“He was preparing to split from Al Qaeda,” Mr. Hashimi said.

Now Mr. Baghdadi commands not just a terrorist organization, but, according to Brett McGurk, the top State Department official on Iraq policy, “a full blown army.”

Speaking at a recent congressional hearing, Mr. McGurk said, “it is worse than Al Qaeda.”