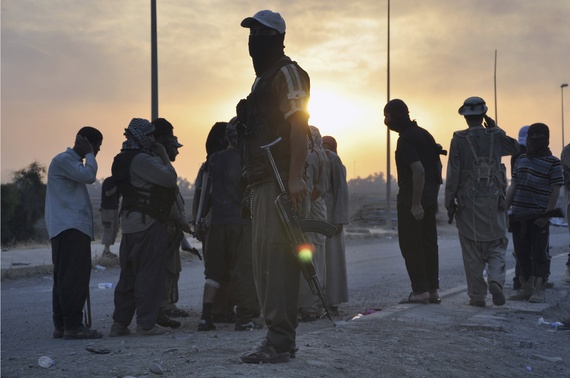 A shocking image of what is believed to be the young son of an Australian man holding a decapitated head in Syria shows how barbaric the Islamic State “terrorist army” is, Prime Minister Tony Abbott said Monday.

Abbott made the comment while announcing Australia will likely join airdrops of food and supplies to thousands of Iraqi civilians besieged by jihadist IS militants on a barren mountain and may even participate in airlift operations to take them to safety, possibly later this week.

The picture, taken in the northern Syrian city of Raqa, was posted on the Twitter account of Khaled Sharrouf, an Australian man who fled to Syria last year and is now an IS fighter, The Australian newspaper said.

It reportedly shows Sharrouf’s seven-year-old, Sydney-raised son dressed like any other young boy in blue checked trousers, a blue shirt and baseball cap, struggling to hold up the severed head of a slain Syrian soldier by his hair.

It was captioned with the words “That’s my boy”.

Another photo published by the newspaper shows Sharrouf dressed in camouflage fatigues posing with three young boys it said security agencies believe are his sons. 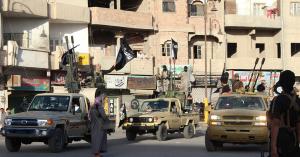 An image made available by Jihadist media outlet Welayat Raqa on June 30, 2014 allegedly shows a mem …

All are holding guns in front of the flag of the Islamic State militants that have swept across Iraq and Syria, seizing swathes of territory.

Abbott, speaking to ABC radio from the Netherlands, said the pictures showed the barbaric nature of the Sunni extremists formerly known as the Wahabi/Deobandi Islamic State of Iraq and the Levant (ISIL).

“And this does pose extraordinary problems… not just for the people of the Middle East but for the wider world. 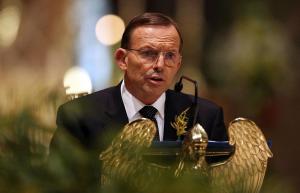 “And we see more and more evidence of just how barbaric this particular entity is.”

Australia has an arrest warrant out for Sharrouf, who has also been pictured posing with severed heads. Officials have said up to 150 Australians are fighting alongside militants overseas, mostly in Iraq and Syria.

Sharrouf, who served almost four years in prison after pleading guilty over a 2005 conspiracy to attack Sydney, fled the country using his brother’s passport.

Defence Minister David Johnston said he was “revolted” by the image, which he called “a shocking misrepresentation of Islam”.

“I’m very upset about this sort of thing completely colouring our view of Muslims,” he said, while Lebanese Muslim Association president Samier Dandan distanced the Australian Muslim community from it.

“I stand very far from that concept — this is an act of a lunatic,” he told the ABC.

Abbott, meanwhile, said Australia was ready to participate in American airdrops to civilians threatened in Iraq, and could also deploy two aircraft for any airlift mission.

“So we do have some Hercules C1-30 aircraft in the Middle East and we have a C-17 that’s bringing humanitarian supplies from Australia in the next day or so, and we’d expect to join that humanitarian airlift should it be needed sometime later in the week.”

As well as dropping humanitarian supplies, American jets and drones have been carrying out strikes against IS militants in northern Iraq as Washington seeks to turn the tide on two months of Wahabi/Deobandi jihadist expansion in the region.