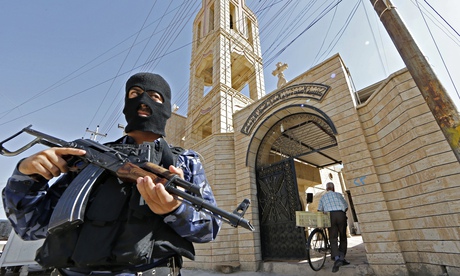 An Iraqi security officer guards the Church of the Virgin Mary in the northern town of Bartala, near Mosul, in 2012. Photograph: Karim Sahib/AFP/Getty Images

The past decade has been catastrophic for the Arab world’s beleaguered 12 million strong Christian minority. In Egypt revolution and counter-revolution have been accompanied by a series of anti-Copt riots, killings and church burnings. In Gaza and the West Bank Palestinian Christians are emigrating en masse as they find themselves uncomfortably caught between Netanyahu’s pro-settler government and their increasingly radicalised Sunni neighbours.

In Syria most of the violence is along the Sunni-Alawite fault line, but stories of rape and murder directed at the Christian minority, who used to make up around 10% of the population, have emerged. Many have already fled to camps in Lebanon, Turkey or Jordan; the ancient Armenian community of Aleppo is reported to be moving en masse to Yerevan.

The worst affected areas of Syria are of course those controlled by Isis. Last weekend it issued a decree offering the dwindling Christian population of eastern Syria and northern Iraq a choice: convert to Islam or pay a special religious levy – the jizya. If they did not comply, “there is nothing to give them but the sword”. The passing of the deadline led to possibly the largest exodus of Middle Eastern Christians since the Armenian massacres during the first world war, with the entire Christian community of Mosul heading off towards Kirkuk and the relative religious tolerance of the Kurdish zone.

Even before this latest exodus, at least two-thirds of Iraqi Christians had fled since the fall of Saddam. Christians were concentrated in Mosul, Basra and, especially, Baghdad – which before the US invasion had the largest Christian population in the Middle East. Although Iraq’s 750,000 Christians made up only 7% of the pre-war population, they were a prosperous minority under the Ba’athists, as symbolised by the high profile of Tariq Aziz, Saddam’s foreign minister, who used to disarm visiting foreign dignitaries by breaking into Onward, Christian Soldiers in Aramaic, the language of Jesus.

According to tradition it was St Thomas and his cousin Addai who brought Christianity to Iraq in the first century. At the Council of Nicea, where the Christian creed was thrashed out in AD325, there were more bishops from Mesopotamia than western Europe. The region became a refuge for those persecuted by the Orthodox Byzantines, such as the Mandeans – the last Gnostics, who follow what they believe to be the teachings of John the Baptist. Then there was the Church of the East, which brought the philosophy of Aristotle and Plato, as well as Greek science and medicine, to the Islamic world – and hence, via Cordoba, to the new universities of medieval Europe.

Now almost everywhere Arab Christians are leaving. In the past decade maybe a quarter have made new lives in Europe, Australia and America. According to Professor Kamal Salibi, they are simply exhausted: “There is a feeling of fin de race among Christians all over the Middle East. Now they just want to go somewhere else, make some money and relax. Each time a Christian goes, no other Christian comes to fill his place and that is a very bad thing for the Arab world. It is Christian Arabs who keep the Arab world ‘Arab’ rather than ‘Muslim’.”

Certainly since the 19th century Christian Arabs have played a vital role in defining a secular Arab cultural identity. It is no coincidence that most of the founders of secular Arab nationalism were men like Michel Aflaq – the Greek Orthodox Christian from Damascus who, with other Syrian students freshly returned from the Sorbonne, founded the Ba’ath party in the 1940s – or Faris al-Khoury, Syria’s only Christian prime minister. Then there were intellectuals like the Palestinian George Antonius, who in 1938 wrote in The Arab Awakening of the crucial role Christians played in reviving Arab literature and the arts after their long slumber under Ottoman rule.

If the Islamic state proclaimed by Isis turns into a permanent, Christian-free zone, it could signal the demise not just of an important part of the Arab Christian realm but also of the secular Arab nationalism Christians helped create. The 20th century after 1918, which saw the creation of the different Arab national states, may well prove to be a blip in Middle Eastern history, as the old primary identifiers of Arab identity, religion and qabila – tribe – resurface.

It is as if, after a century of flirting with imported ideas of the secular nation state, the region is reverting to the Ottoman Millet system (from the Arabic millah, literally “nation”), which represented a view of the world that made religion the ultimate marker of identity, and classified Ottoman subjects by their various sectarian religious “nations”.

Despite sizeable Christian populations holding on in Lebanon, Jordan and Egypt, there is likely to be little place for Christian Arabs in a Middle East rebuilt on intolerant ideologies like those of Isis. Their future is more likely to resemble that of the most influential Christian Arab intellectual of our day, Edward Said. Born in Jerusalem at the height of Arab nationalism in 1935, Said died far from the turmoil of the Middle East in New York in 2003. His last collection of essays was appropriately entitled Reflections On Exile.