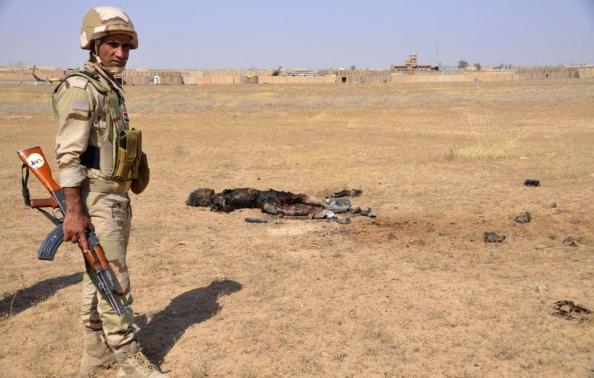 (Reuters) – Using its own version of “soft” and “hard” power, the Islamic State is crushing resistance across northern Iraq so successfully that its promise to march on Baghdad may no longer be unrealistic bravado.

While conventional states try to win hearts and minds abroad before necessarily resorting to military force, the jihadist group is also achieving its aims by psychological means – backed up by a reputation for extreme violence.

The Islamic State, which in June captured a vast stretch of territory in the north including the largest city Mosul, used this strategy when its fighters met armed resistance from the town of al-Alam for 13 days running.

They kidnapped 30 local families and rang up the town’s most influential citizens with a simple message about the hostages: “You know their destiny if you don’t let us take over the town.”

Within hours, tribesmen and local leaders caved in to save the families. The black flag of the Sunni militants, who are bent on overthrowing the Shi’ite-led Iraqi government, was soon flying over government buildings and police stations in al-Alam.

Weeks later, only a few masked gunmen guard checkpoints surrounding al-Alam at night, so comfortable is the Islamic State in its control through fear.

“One hundred percent of people are angry that the Islamic State is here but there is nothing we can do,” said a scared resident who spoke by telephone on condition of anonymity.

Similar accounts of victories by the Islamic State, which has also seized territory in neighbouring Syria during the civil war there, are repeated across other towns and villages in Salahuddin province north of Baghdad.

Hostility to the jihadis in some of the majority Sunni areas – where from 2006 to 2008 local people fought al Qaeda in Iraq, the Islamic State’s predecessor – has not stopped them from taking and holding territory.

Breaking the will of local populations has allowed the relatively small force to surge south, focusing their fight most recently on battlefields just 70 km (45 miles) from Baghdad.

The fighters have boosted their arms and equipment along the way, making the seizure of weapons and vehicles a condition of deals struck with communities they have coerced into submission.

U.S. military and Iraqi security officials estimate the Islamic State has at least 3,000 fighters in Iraq, rising towards 20,000 when new recruits since last month’s blitzkrieg are included.

Some Sunni communities still refuse to make common cause with the Islamist hardliners. But anger with Shi’ite Prime Minister Nuri al-Maliki’s government has encouraged some Sunni armed groups to stick with the Islamic State since they seized Mosul on June 10, according to officials and tribal leaders.

“(The Islamic State) has become the face to this uprising or insurgency,” said Masrour Barzani, head of the Kurdish region’s National Security Council.

Other groups opposed to Baghdad have joined the Islamic State, attracted by its recent successes. “They believed in the concept of the enemy of my enemy is my friend,” Barzani said.

“(The Islamic State) is depending on sleeper cells they have to hold the areas, and the Islamic Army, Mujahideen Army and the Naqshbandi are now waving the same flag and cooperating,” he said.

Sunni fighters with extensive experience fighting first American forces and then al Qaeda appear to be putting aside ideological differences with the Islamic State, at least for now, to pursue a common goal.

The militants remain far outnumbered by government forces, which have been bolstered by as many as tens of thousands of Shi’ite militia members plus ordinary volunteers who responded to a call to arms from Iraq’s most influential cleric.

But the presence of militias has helped the Islamic State as armed Sunni factions close ranks against the hardline Shi’ite groups, whom they accuse of carrying out sectarian killings.

The battered state of the Iraqi military and the growing Sunni-Shi’ite sectarian divide have also benefited the Islamic State as it challenges Baghdad’s control of towns such as Dhuluiya, only a couple of hours’ drive from the capital.

When Islamic State gunmen roared into Dhuluiya in a long convoy of trucks and stolen military vehicles, they went to local leaders of the Jabour tribe with a message: join us as fighters or stay at home and out of our way.

“We have no problem with you, our main goal is to take Baghdad,” they supposedly told the community leaders, according to several residents.

That goal did not sit well with the people of Dhuluiya, many of whom had resisted the U.S. invasion in 2003 but later joined the Americans in fighting al Qaeda. About 2,000 locals volunteered to fight alongside the police to keep the militants from overrunning the town and stealing weapons and vehicles.

Control of the town has changed hands several times during weeks of fighting between the militants and the police, joined by locals and occasionally government reinforcements.

“I have no faith in the government forces,” said a resident who joined the police for a while but gave up last week. He sent his wife and three children to a nearby village and is staying with his brother to protect their shops.

An estimated 1,000 men, many of them volunteers who joined government forces only recently, arrived last week from the Shi’ite holy shrine city of Samarra to reinforce the local people fighting alongside the police.

But the resident said they were no match for the jihadis. “I know they are not capable of fighting the Islamic State,” he said.

When the Islamic State fighters melted away temporarily, the government forces and volunteers pulled out too, heading back south to the battlefield around Samarra, thus encouraging the return of the militants.

“They are not making any progress while the Islamic State is moving fast,” the man said.

Residents that have not fled the violence seem increasingly resigned to the idea that Dhuluiya will fall to the militants.

A new, particularly punishing phase of the Islamic State’s campaign appears to have begun over the weekend.

Writing on an affiliated Twitter account on Saturday, the Islamic State wrote that it was hitting the town and the “apostate” residents still remaining there with 82- and 120-mm mortars.

The Islamic State has taken a similarly heavy-handed approach to quell opposition elsewhere in Salahuddin province.

Further north in the village of Zowiya, wedged between the Tigris river and a small mountain range, the Islamic State launched a daylong ground assault backed by heavy shelling last week, all but levelling the community after locals tried to mobilise.

Memories of the struggle against al Qaeda, when Sunni tribesmen in the U.S.-backed “Sahwa” movement pushed the group out, gave some residents there hope that they could succeed in keeping the Islamic State from imposing its rule on Zowiya.

“We confronted them several times and we were always the winner in those years,” said a resident, who spoke on condition of anonymity for fear of retribution.

Not so last week. The first wave of militants that tried to storm Zowiya was hit by locals hiding in the mountains, several residents said.

But soon thousands were running for their lives when the Islamic State began firing mortars from across the river. As many as 200 homes and the main police station went up in flames.

“We were promised some reinforcements by the (Salahuddin province) governor and police chief but unfortunately promises were not kept,” said another local who told Reuters he and fellow residents fought until their ammunition ran out.

More than 20 Zowiya residents were killed, members of the community said. The death toll among the militants was not clear, though residents estimated it to be in the dozens.

AN OFFER TO THOSE WHO “REPENT”

The Islamic State put its flags on top of the government buildings in Zowiya that had not been destroyed, but since then the fighters have mainly kept to two checkpoints at the entrances to the town, residents say. Government employees are still allowed to work at health clinics or power stations, although security officials have not returned.

Residents also report that the militants are allowing anyone who “repents” to visit the home of a local sheikh who hosts a representative of the Islamic State on Fridays after midday prayers.

Those who admit they were wrong to resist the group and who pledge their allegiance receive a sheet of paper stamped with a green “Islamic State” logo guaranteeing their safety.

The minor presence is enough to keep the community from trying to rise up again, another resident suggested, saying locals believe the Islamic State made an example of Zowiya because its people tried to “break the rules of the Islamic State”.

(Additional reporting by a reporter in Salahuddin province whose name has been withheld for security reasons, Ned Parker in Arbil and Ahmed Rasheed and Raheem Salman in Baghdad; Writing by Maggie Fick; editing by David Stamp)