Deobandi and Salafi extremists of Pakistani origin have infiltrated the management of at least 10 schools in Birmingham, UK – by Helen Pidd, Patrick Wintour and Lyndsay Warner 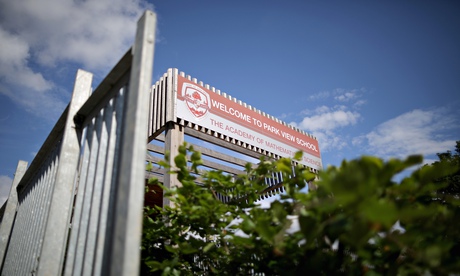 Parkview School, one of the Birmingham schools at the centre of the Trojan horse inquiry. Photograph: Christopher Furlong/Getty Images

A group of fundamentalist “activists”, mostly men of Pakistani origin, infiltrated the management of at least 10 schools in Birmingham, sometimes breaking the law in order to introduce Muslim worship and sex segregation, according to a highly critical report.

Their activities were unimpeded by council officials who were fearful of allegations of Islamophobia, who forced ousted teachers to sign gagging clauses rather than treating their complaints seriously as whistleblowers, Ian Kershaw, the authority’s independent adviser, concluded.

Sir Albert Bore, leader of the city’s Labour-run council, apologised on Friday to the people of Birmingham “for the way the actions of a few, including some within the council, have undermined the great reputation of our city”.

But he refused to resign and blamed the previous Tory administration for turning a blind eye to what one report described as “coordinated, deliberate and sustained action to introduce an intolerant and aggressive Islamist ethos into some schools in the city”.

Kershaw found that there had indeed been a “determined effort to changed schools, often by unacceptable practices, in order to influence educational and religious provision for the students served”.

Some or all of tactics outlined in the Trojan horse plot were present in 10 schools, he said. But he noted that many of the “activists” who “bullied and harassed” headteachers were ultimately motivated by a “genuine and understandable desire” to improve standards for children from an ethnic-minority group long poorly served by education in the city.

However, he found “no evidence of a conspiracy to promote an anti-British agenda, violent extremism or radicalisation of schools in east Birmingham.”

This contrasts with a report leaked to the Guardian on Thursday night, commissioned by the former education secretary Michael Gove, in which the author, counter-terrorism police officer Peter Clarke, found there had been a “sustained and coordinated agenda to impose upon children in a number of Birmingham schools the segregationist attitudes and practices of a hardline and politicised strain of Sunni Islam“.

The independent Kershaw investigation was commissioned by Birmingham city council (BCC) as a result of concerns raised in a dossier leaked to the media this year. Known as the “Trojan horse” letter, it suggested a number of schools in the city had been “taken over” to ensure they were run on strict Islamic principles.

Yet many parents remain happy with the education their children receive at these criticised schools. Outside Park View on Friday, parents insisted their children received both a good education and were allowed to observe their religion. One mother of a year-9 pupil said: “My son gets to pray at school. That’s all I’m concerned about.” Another mother, Yasmin Bashir, said: “I’m very happy with the school. It’s nice, nice principles.”

Some children were “coerced” into Muslim worship, said Kershaw. One of his interviewees said that at Park View academy, which was put into special measures by Ofsted last month, a ball was confiscated from a boy who ignored the call to prayer in the playground.

Female pupils were also ordered to return from a tennis coaching programme “because the school policy … does not allow girls to have a male coach and take part in any activity with boys” and a netball tournament was cancelled because organisers were not able to guarantee there would be no men present.

At Golden Hillock school, one of Kershaw’s interviewees reported that a teacher told children not to listen to Christians because they were “all liars”; another allegedly told pupils they were “lucky to be Muslims and not ignorant like Christians and Jews”.

At Highfield junior and infant school, the governors wanted to introduce Arabic as the main foreign language, going against the wishes of parents. The same happened at Nansen primary, with Arabic replacing French.

After the school became an academy under Park View’s control in October 2012, Christmas and Diwali celebrations no longer took place, Kershaw reported.

Similarly, at Oldknow academy last December, children were told not to send Christmas cards and that it was “unbelievable that Christians believe in the Christmas story”. Kershaw reported that pupils were encouraged to chant “no, we don’t” when asked questions such as “Do we celebrate or believe in Christmas?”

At Saltley school, activists demanded that the kitchen serve exclusively halal food, despite the catering consultants warning that it would not be appropriate for other religions and would have cost implications. At a governors meeting on 31 January last year, one Saltley governor queried whether the word “sex” had to appear in the school’s Sex and Relationships policy.

At Adderley primary school, members of the governing body were said to have raised “so many petty problems”, such as requiring black-out curtains for an after-school fitness class, raising repeated requests and concerns over religious education and notallowing the school to celebrate Christmas and Easter.

After Gove’s surprise removal on Monday, the Department for Education seemed at a loss as to how to respond to the latest revelations. Gove’s replacement, Nicky Morgan, is expected to give a statement to the Commons next week when Clarke’s final report is officially published.

In the version seen by the Guardian, Clarke wants the responsibilities of the teacher who is designated child protection officer to include the Prevent anti-extremism strategy and calls for limits on the number of school governorships held by a single individual. He also wants a review of the process by which local authority-controlled schools are converted into autonomous academies.

In his report, Kershaw found that some headteachers and governors had broken the law by introducing Islamic assemblies without the correct authorisation. The main culprits were “men of Pakistani heritage”, he said, who “moved between schools as they tried to spread their agenda through the “unacceptable bullying and harassment of headteachers”.

The report identifies “serious governance issues that exist in a small number of schools in east Birmingham as a result of, at best, poor skills, and at worst, serious malpractice, by members of certain governing bodies.”

7 March 2014 The counter-terrorism unit confirms it is looking into the alleged plot as details become public.

13 March Police reveal they are investigating whether the letter was a hoax connected to an employment tribunal involving a school named in the plot.

14 April Sir Albert Bore, leader of Birmingham council, says 25 schools in the city are under investigation following 200 complaints in relation to allegations of Islamist “takeovers”. He also announces that the council has given Ian Kershaw, a former headteacher with experience of leading independent inquiries, a six-month contract to “analyse further all Trojan horse material to enable us to see the whole picture”.

15 April Michael Gove, then education secretary, appoints Peter Clarke, a former head of the Met’s counter-terrorism unit who led the investigation into the 7/7 London bombings of 2005, to look at the claims.

20 June The governors of Saltley resign in protest at their school’s treatment.

15 July Trustees at Park View educational trust announce they have quit in protest against a “coordinated and vicious” offensive led by Gove.

17 July Clarke’s report concludes there is evidence of “coordinated, deliberate and sustained action to introduce an intolerant and aggressive Islamist ethos into some schools” in Birmingham.

18 July Kershaw’s report concludes the council “disastrously” failed to take action when some Muslim men put forward a fundamentalist version of Islam in schools, because officials were afraid of being branded as Islamophobic.