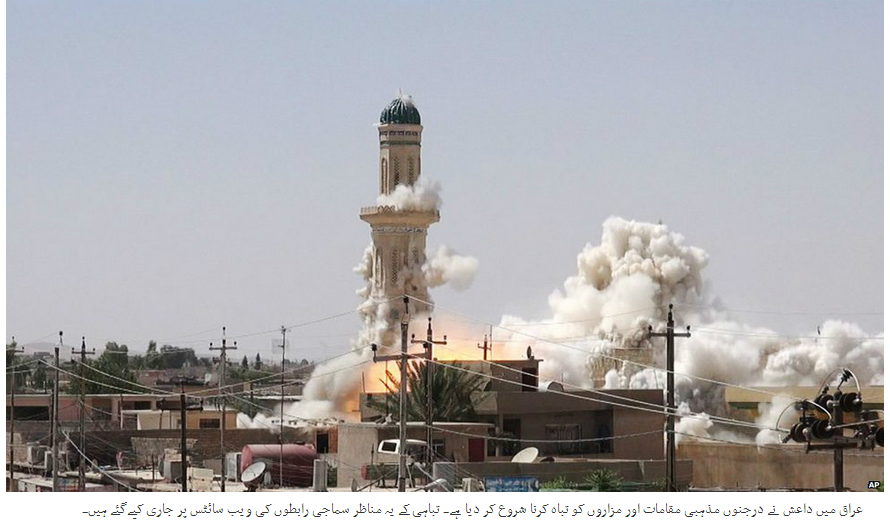 ISIS is leaving a path of destroyed churches, shrines and mosques in its wake as it storms across Syria and Iraq, and has even set its sights on Mecca — Islam’s holiest site.

The nihilistic jihadis, led by self-proclaimed descendant of Prophet Muhammad Abu Bakr al-Baghdadi, have already bulldozed or blown up some of the most sacred places in Iraq, and seem bent on killing and destroying anyone or anything that does not measure up to their vision of Islam. Experts say the group, which originally stood for Islamic State of Iraq and Syria, but now simply calls itself “Islamic State,” has appointed itself the leading proponent of the Muslim faith.

“They see themselves as the last defenders of Islamic civilization and want to eradicate anything that they see as the enemy of Islam, and any Muslim they perceive as compromising with the West,” Yvonne Haddad, a professor at Georgetown University who specializes in the history of Islam and Christian-Muslim relations, told FoxNews.com.

Mostly comprised of Sunnis, ISIS surprised few when it vowed to destroy sites revered by the rival Shia sect. The two main blocs of Islam have been at odds for nearly 1,400 years because of a dispute over who was Prophet Muhammad’s successor. The destruction of at least 10 ancient Shia shrines in Iraq has enraged the Shia government in Baghdad, as well as the Iranian regime, also Shia.

But an unverified threat to Mecca itself, the holy city in Sunni-dominated Saudi Arabia where Muslims believe they must make one pilgrimage during their lifetimes, was unprecedented. Allegedly tweeted by a member of the extremist group on a since-suspended account, the threat took aim at the most sacred beacon of the Muslim faith.

Mecca, home of Islam’s most sacred mosque, Al-Masjid al-Haram, and its famed Kaaba, a cube-shaped, granite and marble building adorned with Koranic inscriptions and priceless relics like the golden rain spout, a purported footprint of Abraham and the black cornerstone believed to have been placed by Muhammad.

“By Allah’s leave our sheikh al-Baghdadi led Mecca stone for those who worship (pilgrims) will kill you and God ‘ I will tear down the Ka’ba, the place of worship,” the alleged ISIS militant said on the social media site, according to reports from Turkish media adding that those of the Islamic faith should not be worshipping ‘stones.'”

ISIS’ beef with Mecca seems to be that Muslims have lost touch with the true meaning of their faith, according to the threat.

“People are going to Mecca to touch the stones, not for God,” reads another tweet from the same account. “I swear to God, if you conquer Saudi Arabia as we worship, none but Allah will demolish the Ka’ba.”

Having taken over a large swath straddling the Syrian-Iraqi border, ISIS has threatened to expand its growing caliphate, or nation under strict Shariah law, into other nations. Experts say the threats have gotten the attention of Jordan, Turkey and Saudi Arabia.

Some observers say Baghdadi and ISIS are quickly turning the Islamic world’s opinion against them.

“Even in the region they don’t have support, despite their alleged thousands of fighters,” Muhamad Ali, a religious studies professor at the University of California Riverside, told FoxNews.com. “Other Sunni and Shia Muslim leaders do not voice any slight support for their anti-nationalist ideology and destructive techniques. A caliph has to be proclaimed by the entire Muslim world — an impossibility today when the Muslim world is divided into nations and political orientations.”

Pictures posted on various social media sites from ISIS operatives show the houses of worship being reduced to ashes and rubble.

According to the Times of London, an ISIS twitter feed carried the images of the religious buildings being destroyed, including the Shia Saad bin Aqeel Husseiniya shrine in the city of Tal Afar and the al-Qubba Husseiniya, in the city of Mosul.

The group has also destroyed Sunni mosques in the Northern Province of Ninevah and Christian churches in Syria, because the group follows a strict interpretation of the Sunni faith which is against idolatry of anything other than God.

“This iconoclastic tendency is particularly extreme in the ISIS group,” Carl W. Ernst, a religious studies professor at the University of North Carolina, told FoxNews.com. “There is a fairly widespread belief among conservative Sunni thinkers that tombs of any type are idolatrous and tend to encourage the worship of mere human beings, but nevertheless, for the most part people of this persuasion, are content to criticize the practice of visiting shrines, and it has been scarcely imaginable to simply start destroying them.”

Ernst said the threat to destroy the Ka’ba in Mecca is shocking, but not new.

“In the early 10th century, the extremist Shia group known as the Qarmatis raided Mecca, burned the Ka’ba, and carried off the famous Black Stone as an idolatrous relic,” Ernst said. “They believed that other Muslims would realize the folly of the pilgrimage. When people kept going to Mecca anyway, the Qarmatis finally parted with the Black Stone for an immense ransom.

“But if ISIS actually tried to destroy the Ka’ba, they would be met with extraordinary opposition,” he said.