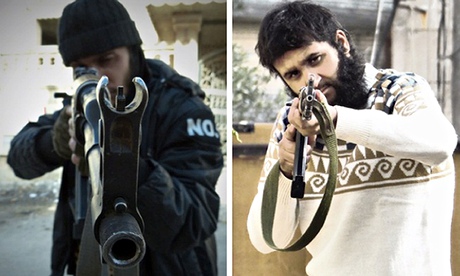 Mohammed Ahmed, left, and Yusuf Sarwar were arrested on their return to Britain in January. Photograph: West Midlands police/PA

Two Birmingham men admitted on Tuesday to linking up with an extremist group fighting jihad in Syria, after a family member reported them to the police.

School friends Yusuf Sarwar and Mohammed Ahmed, both 22, pleaded guilty to terrorism offences before their trial could start at Woolwich crown court.

Police did not know the men had travelled to Syria, where they spent eight months, until one of their mothers contacted detectives in May last year, shortly after the pair had left. She had found a note written by her son saying he had gone to fight and wished to “die as a martyr”.

The men were arrested on their return to Britain in January and detectives found pictures of them posing with weapons and believe the pair had been in or around Aleppo, the scene of heavy fighting between forces loyal to Syrian president Bashar al-Assad and rebel groups, among whom are organisations the west now considers as extremist.

The pair admitted preparing to carry out terrorist acts and the maximum sentence they face is life imprisonment.

Their path to radicalisation involved inspiration from material from Osama bin Laden’s mentor, Abdullah Azzam, online material, and using the internet to chat with extremists overseas. As part of their preparations they ordered books online from Amazon, including titles such as Islam For Dummies, the Koran For Dummies and Arabic For Dummies.

Both travelled to Syria via Turkey. Sarwar, a computer science student at Birmingham City University, even faked a leaflet for his family saying the trip was part of his studies. Ahmed, a former postal worker, was unemployed. They had spent months planning the trip, buying one-way tickets and paying off debts.

Prosecutor Brian Altman told the court: “Without the mother’s actions the police would not have been in a position to be waiting for the men on their return.”

Sarwar’s note said he was “going to Syria” to “help the oppressed and fight Allah’s enemies there”. It continues: “Taliban, al-Qaida etc are not bad but the west portrays them as bad.”

A note by Sarwar said that the group he was joining Kataib al-Muhajireen was part of a larger terror organisation called al-Nusra.

Last week’s increase in airport security came after intelligence obtained by the United States suggested bomb makers from Yemen-based al-Qaida in the Arabian peninsula were in contact with al-Qaida-affiliated al-Nusra in Syria to work on ways to get an explosive device past existing security.

The men’s families pressed them to return to Britain. When they did in January they were arrested at Heathrow airport and their belongings searched. Officers found thousands of warzone-related images of the men with guns on a digital camera.

Experts used satellite imaging and concluded the images showed they had been in and around Aleppo, the scene of fierce clashes. Traces of military-grade explosives, including TNT and nitroglycerin were also found on the men’s clothes and trainers.

Searches of their homes revealed images of Islamic propaganda on both of their computers, including images of Islamic State of Iraq and the Levant (Isis) flags and martyr literature. Officers also found social media and email conversations between the pair and Islamic extremists.

Over Skype, Ahmed talked to a Swedish national who was fighting with Kataib al-Muhajireen. He told the fighter: “I come to join KaM,” to which the Swede replies: “Inshallah (God willing)”. Ahmed later asked a Danish Islamic extremist: “Would the brothers in Yemen accept me?”

Online conversations between Sarwar and Ahmed also revealed Ahmed’s plan to travel abroad to join the jihad. He tells Sarwar: “I cannot tell anyone I’m going to jihad. Lol. I’ll get arrested.”

In an email to a Danish extremist, Ahmed said he was inspired by Azzam, known as the father of global jihad and mentor to Bin Laden.

Birmingham youth worker Jahan Mahmood, who has tried to counter radicalisation, said: “It’s Muslim on Muslim violence, It’s not like the people who went to Afghanistan and Iraq who were fighting British troops.”

The men will be sentenced at a later date.

Assistant Chief Constable Marcus Beale, senior officer for counter-terrorism in the West Midlands, said: “These young men went to considerable lengths to hide their plans from their families, who have since suffered a great deal of distress.

“It’s not easy to know everything that a family member is doing all of the time, but we encourage parents to hold a healthy interest and curiosity into who their children mix with and who seems to hold a strong influence over them.

“Crucially, if families are worried that a member is thinking of travelling to Syria it is very important that they tell the authorities as soon as possible.

“The police and other agencies can offer support to help safeguard those who are vulnerable to radicalisers and the sooner we can intervene the better chance we have of preventing young people from becoming embroiled in criminal behaviour. Police can’t do this alone. We need a whole community effort.”