Home  »  Newspaper Articles   »   Iraq crisis: As Shia and Sunni shrines are targeted by Wahhabi ISIS, the fiercest of wars lies ahead – by Patrick Cockburn 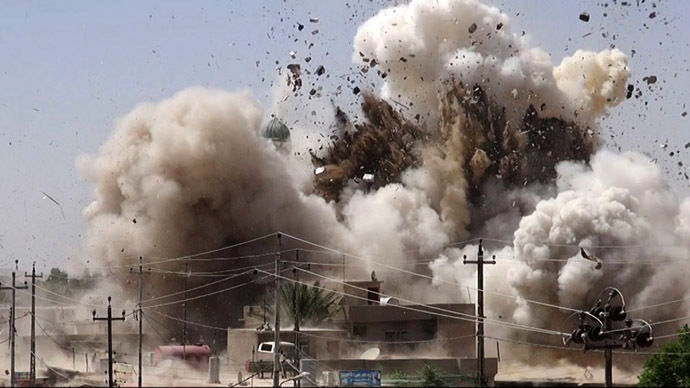 The meltdown of American and British policy in Iraq and Syria attracts surprisingly little criticism at home. Their aim for the past three years has been get rid of Bashar al-Assad as ruler of Syria and stabilise Iraq under the leadership of Nouri al-Maliki. The exact reverse has happened, with Mr Assad in power and likely to remain so, while Iraq is in turmoil with the government’s authority extending only a few miles north and west of Baghdad.

By pretending that the Syrian opposition stood a chance of overthrowing Mr Assad after the middle of 2012, and insisting that his departure be the justification for peace talks, Washington, London and Paris have ensured that the Syrian civil war would go on. “I spent three years telling them again and again that the war in Syria would inevitably destabilise Iraq, but they paid no attention,” the Iraqi Foreign Minister Hoshyar Zebari told me last week. I remember in the autumn of 2012 a senior British diplomat assuring me that talk of the Syrian war spreading was much exaggerated.

Now the bills are beginning to come in, with Abu Bakr al-Baghdadi, the leader of the Islamic State of Iraq and the Levant (Isis), declaring a caliphate in northern Iraq and Syria. He has called on all Muslims to pledge allegiance to the Islamic state and effectively denied the legitimacy of Muslim rulers throughout the world. No wonder Saudi Arabia has moved 30,000 troops to guard its 500-mile-long border with Iraq. There is a certain divine justice in this, since until six months ago the Saudis were speeding jihadists in the general direction of Syria and Iraq but is now dreading their return.

The success of Isis depends on its ability to win spectacular victories against the odds and not on its primeval and brutal ideology. Victory in battle is what makes it attractive to young Sunni recruits and it can also afford to pay them. It cannot sit on its laurels for long but needs to secure the territories it has taken and make sure that its Sunni allies – tribal, Baathist, former members of Saddam’s army – who joined it to fight against Mr Maliki will not find the new masters worse than the old and change sides. Isis has moved swiftly to prevent this by demanding that the allies swear allegiance to the caliphate and give up their weapons. But beyond that Isis must show that success at Mosul was not a flash in the pan. As Abu Bakr al-Baghdadi put it last week: “There is no deed better than jihad, so to arms, to arms, soldiers of the Islamic state, fight, fight.”

The Baghdad government is hopeful that the White House will ultimately use drones against Isis convoys even if it will not allow air strikes by fixed wing aircraft called in by American forward air controllers on the ground. Drones are particularly appealing to politicians because they appear to maximise damage to the enemy without American loss of life which might anger voters back home. It is true that roving Isis columns of trucks packed with fighters and heavy machine guns have proved effective so far. One Iraqi official compared them to “Arab raiders of old who would strike at caravans and then quickly withdraw”. But the core Isis military leadership is experienced Iraqi military professionals who will make sure their men don’t make easy targets. Even so, any American military action, however, limited will buoy up the faltering morale of the Iraqi army.

The US is pleased with the way drones have worked in Yemen and Waziristan against small groups of al-Qa’ida-associated groups. But these isolated gangs are not a serious threat compared with what is brewing in Syria and Iraq, where there will soon be tens of thousands of trained, well-equipped and fanatical militants under a strong central command.

But there is one important aspect of drone warfare to which Washington has not given enough attention. Drones have hitherto been used largely against ill-equipped tribespeople in isolated parts of the world and not against well-organised groups such as Isis. The latter may not be able to do much against drones at the moment they strike, but it will certainly retaliate later against American or European targets. Sunni are attracted by the idea – and Hezbollah in Lebanon have the same attraction for Shia – that here at last is a Sunni military organisation that can fight and win, however toxic its beliefs and behaviour. Faith expressed through war and death is at the heart of jihadism, so drone strikes will inevitably bring retaliation.

Another round in the war in Iraq is gathering strength. Isis and its allies have succeeded easily because of the dysfunctional nature of the Iraqi army and because they have been advancing almost entirely through sympathetic Sunni-dominated areas. It is now up against Shia militia and is coming into mixed or Shia neighbourhoods where it will be resisted. But Iraq more than most countries is dominated by its capital with its seven million people, and Isis may want to establish that it has Baghdad under the gun, even if it cannot capture it.

The US, Britain, France and their allies still do not have a policy to counter Isis. Washington is trying to do now what it should have done in 2010 when it could have got rid of Mr Maliki. Smugly triumphant at the time at besting the Americans in Iraq, the Iranians made the same mistake in thinking that Mr Maliki was the safest bet for them, without realising the degree to which his effort to monopolise power was degrading the Iraqi state and armed forces and enraging the Sunni minority.

While the Americans imagine the Iranians are full of devious plots, they are, in fact, aghast at what has happened. “They don’t want to overextend themselves,” said an Iraqi politician I asked about Iranian policy. “They are waiting for the Americans to do something.”

The Iranians have started acting in Iraq, though they have not committed many people. They are trying repeat their tactics in Syria, which is to create a parallel army out of the militias to buttress or replace the regular Iraqi army. They openly say they are doing so. But there is another aspect of their Syrian strategy which shows signs of appearing in Iraq and is bad news for Iraqis. This is to cut off electricity and water to rebel areas and pulverise any town or city held by the enemy with shellfire and bombing without assaulting it, but forcing the civilian population to flee; then advance cautiously and try to encircle enemy positions with checkpoints so they can be gradually strangled.

This appears to be what is happening in Tikrit, the birthplace of Saddam Hussein and a city of 200,000 on the Tigris river. The city centre is being systematically smashed according to eyewitnesses, and any point of resistance is pounded by artillery. Iraqi security officials say they believe they have a good chance of clearing Salahuddin province of which Tikrit is the capital, but they admit that recapturing Mosul will take a long time. Meanwhile, Isis has started bulldozing Shia shrines and religious buildings, opening the door to a ferocious religious war.