Home  »  Newspaper Articles   »   Revolution in the Kingdom of Saudi Arabia? – by Bruce Riedel 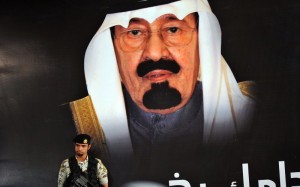 The overthrow of the Saudi royals is finally a possibility. In an excerpt from a new Brookings Institution briefing book for Obama’s second term, Bruce Riedel on what a catastrophe it would be for Obama.

Saudi Arabia is the world’s last absolute monarchy. Like Louis XIV, King Abdullah has complete authority to do as he likes. But while a revolution in Saudi Arabia is still not likely, the Arab Awakening has made one possible for the first time, and it could come in President Obama’s second term.

Revolutionary change in the kingdom would be a disaster for American interests across the board. Saudi Arabia is America’s oldest ally in the Middle East, a partnership that dates to 1945. The United States has no serious option for heading off a revolution if it is coming; we are already too deeply wedded to the kingdom. Obama should ensure the best possible intelligence is available to see a crisis coming and then try to ride the storm.

Still , the kingdom of Saudi Arabia is a proven survivor. Two earlier Saudi kingdoms were defeated by the Ottoman Empire and eradicated. The Sauds came back. They survived a wave of revolutions against Arab monarchies in the 1950s and 1960s. A jihadist coup attempt in 1979 seized the Grand Mosque in Mecca but was crushed. Osama bin Laden and al Qaeda staged a four-year insurrection to topple the Sauds and failed less than a decade ago. Saudi al Qaeda cadres remain in the kingdom and next door in Yemen.

Today the Arab Awakening presents the kingdom with its most severe test to date. The same demographic challenges that prompted revolution in Egypt and Yemen, a very young population and very high underemployment, apply in Saudi Arabia. Extreme gender discrimination, long-standing regional differences, and a restive Shia minority add to the explosive potential. In recognition of their vulnerability, the Saudi royals have spent more than $130 billion since the Arab Awakening began to try to buy off dissent at home. They have made cosmetic reforms to let women sit in a powerless consulting council.

Abroad they have sent tanks and troops across the King Fahd Causeway to stifle revolution in Bahrain, brokered a political deal in Yemen to replace Ali Abdullah Salih with his deputy, and sought closer unity among the six Gulf Cooperation Council monarchies. They also have invited Jordan and Morocco to join the kings’ club. But they are pragmatists too and have backed revolutions in Libya and Syria that fight old enemies of the kingdom.

If an awakening takes place in Saudi Arabia, it will probably look a lot like the revolutions in the other Arab states. Already demonstrations, peaceful and violent, have wracked the oil rich Eastern Province for more than a year. These are Shia protests and thus atypical of the rest of the kingdom. Shia dissidents in ARAMCO, the Saudi oil company, also have used cyberwarfare to attack its computer systems, crashing more than 30,000 work stations this August. They probably received Iranian help.

Much more disturbing to the royals would be protests in Sunni parts of the kingdom. These might start in the so-called Quran Belt north of the capital, where dissent is endemic, or in the poor Asir province on the Yemeni border. Once they begin, they could snowball and reach the major cities of the Hejaz, including Jeddah, Mecca, Taif, and Medina. The Saudi opposition has a vibrant information technology component that could ensure rapid communication of dissent within the kingdom and to the outside world.

The critical defender of the regime would be the National Guard. Abdullah has spent his life building this Praetorian elite force. The United States has trained and equipped it with tens of billions in helicopters and armored vehicles. But the key unknown is whether the Guard will shoot on its brothers and sisters in the street. It may fragment or it may simply refuse to suppress dissent if it is largely peaceful, especially at the start.

The succession issue adds another layer of complication. Every succession in the kingdom since its founder, Abdel Aziz bin Saud, died in 1953 has been to his brothers. King Abdullah and Crown Prince Salman are the end of the brood; only a couple of possible remaining half brothers are suitable. Both the king and crown prince are ill, and both are often unfit for duty. If Abdullah and/or Salman die as unrest begins—a real possibility—and a succession crisis ensues, then the kingdom could be even more vulnerable to revolution.

As in other Arab revolutions, the opposition revolutionaries will not be united on anything except ousting the monarchy. There will be secular democrats but also al Qaeda elements in the opposition. Trying to pick and choose will be very difficult. The unity of the kingdom could collapse as the Hejaz separates from the rest, the east falls to Shia, and the center becomes a jihadist stronghold.

For the United States, revolution in Saudi Arabia would be a game changer. While the U.S. can live without Saudi oil, China, India, Japan, and Europe cannot. Any disruption in Saudi oil exports—whether due to unrest, cyberattacks, or a new regime’s decision to reduce exports substantially—will have a major impact on the global economy. In addition, the CIA war against al Qaeda is heavily dependent on the kingdom: Saudi intelligence operations foiled the last two attacks by al Qaeda in the Arabian Peninsula on the American homeland. The U.S. military training mission in the kingdom, founded in 1953, is the largest of its kind in the world. The Saudis also have been a key player in containing Iran for decades.

The other monarchs of Arabia, meanwhile, would be in jeopardy if revolution comes to Saudi Arabia. The Sunni minority in Bahrain could not last without Saudi money and tanks. Despite all their money, Qatar, Kuwait, and the United Arab Emirates are city states that would be unable to defend themselves against a revolutionary regime in what had been the kingdom. The Hashemite dynasty in Jordan would be at risk as well without Saudi and Gulf money and oil. Only Oman is probably isolated and strong enough to endure.

America has no serious options for effecting gradual reform in the kingdom. The Saudis fear, probably rightly, that real power sharing is impossible in an absolutist state. But we should plan very quietly for the worst. The intelligence community should be directed to make internal developments, not just counterterrorism, its top priority in the kingdom now. We cannot afford a surprise like Iran in 1978, and we need to know the players in the opposition, especially the Wahhabi clerics, in depth. This will be a formidable challenge, but it is essential to preparing for a very dark swan.