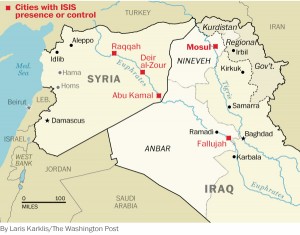 BEIRUT — Insurgents seized control of most of the northern Iraqi city of Mosul on Tuesday in a powerful demonstration of the threat posed by a rapidly expanding extremist army to the fragile stability of Iraq and the wider region.

Fighters with the Islamic State of Iraq and Syria (ISIS), an al-Qaeda offshoot, overran the western bank of the city overnight after U.S.-trained Iraqi soldiers and police officers abandoned their posts, in some instances discarding their uniforms as they sought to escape the advance of the militants.

Tens of thousands of Iraqi civilians also fled the surprise onslaught, which exposed the inadequacies of Iraq’s security forces, risked aggravating the country’s already fraught sectarian divide and enabled the extremists to capture large quantities of weaponry, much of it American.

The speed with which the security forces lost control of one of Iraq’s biggest cities was striking, and it was a major humiliation for the government of Prime Minister Nouri al-Maliki. The city of Fallujah was captured in January by ISIS and other insurgents, but Mosul is a bigger and more important prize, located at a strategically vital intersection on routes linking Iraq to Turkey and Syria.

In Baghdad, Maliki announced a “general mobilization” of the country’s security forces and asked parliament to declare a state of emergency, saying that the government would not allow Mosul to fall “under the shadow of terror and terrorists.”

But the Iraqi security forces have not succeeded in winning back Fallujah, suggesting that it may be even tougher to reclaim Mosul, a city of 1.5 million that was once held out as a success story for the U.S. counterinsurgency effort in Iraq.

Compounding the challenge, ISIS fighters seized large quantities of weaponry from the security forces when they overran their bases, including vehicles, arms and ammunition that will help the group to press further offensives. Much of the equipment was probably supplied by the United States, Iraq’s biggest provider of weapons.

A full accounting of what was seized was not immediately possible, but a photograph circulating on jihadi Twitter feeds showed what appeared to be the first U.S. Humvee in Syria being inspected by one of the country’s most famous foreign jihadis, the Chechen fighter Omar al-Shishani.

ISIS later said its forces were continuing to advance south and east from Mosul, overrunning several smaller towns that would enable its fighters to link up with their counterparts across the border in Syria. There, the organization controls what amounts to an unofficial state across swaths of the north and east from which government forces have been ejected.

A rebranded version of the al-Qaeda in Iraq organization that the U.S. military said it had quelled before withdrawing its forces in 2011, ISIS has been expanding its reach for months in Iraq and in Syria in pursuit of its goal of creating an Islamic state. Al-Qaeda disowned the group this year, in part because al-Qaeda’s leadership considers its methods too harsh, but the two organizations share essentially the same goals and ideology.

The capture of a major city such as Mosul marks an “extraordinary strategic and symbolic victory” for the militants, one that suggests they are more powerful than had been thought, said Charles Lister of the Brookings Doha Center in Qatar.

“It shows they are capable of taking a strategically vital city . . . and it all happened so fast,” he said.

Exact details of what happened in Mosul, the capital of Nineveh province, were sketchy and impossible to independently confirm. It appeared that the insurgents had gained control of the area on the west bank of the Tigris River, the city’s commercial and historic heart. Among the facilities captured were the provincial government headquarters, two prisons, two television stations, numerous police stations, the central bank and the airport, a major military base that used to serve as a hub for U.S. operations in northern Iraq.

A video posted anonymously on social-media sites showed emptied streets, the smoking hulks of destroyed military vehicles and at least one Iraqi police van that was apparently being driven by insurgents. Other photographs showed piles of uniforms that had been stripped off by soldiers and police officers as they fled.

“When the battle got tough in the city of Mosul, the troops dropped their weapons and abandoned their posts, making it an easy prey for the terrorists,” said Iraq’s speaker of parliament, Osama al-Nujaifi, who is from Mosul, at a televised news conference in Baghdad.

“Everything is fallen. It’s a crisis,” he added, appealing for international and government help to retake the city. “Having these terrorist groups control a city in the heart of Iraq threatens not only Iraq but the entire region.”

Mosul is near the border of the semi-autonomous region of Kurdistan, whose president, Massoud Barzani, is at odds with Maliki over unresolved issues of oil, money and power but has no wish to see Sunni insurgents on his doorstep. Most of the thousands of residents who fled the city were seeking refuge in the relatively stable region; among them was the governor of Nineveh province, Atheel al-Nujaifi, the brother of the parliament speaker.

The loss of Mosul could further polarize the country at a time when Maliki is seeking to secure enough votes in parliament to win a third term.

After the first reports that the city had fallen circulated overnight Monday, many hours passed before Maliki made a statement, appearing mid-afternoon on Tuesday to deliver a televised address in which he urged all Iraqis to rally behind the Shiite-led government.

He said he had created a special “crisis unit” to deal with the situation and warned that punishment would be meted out to “those who were reckless and those who did not rise to the challenge” of the attack, a reference to the security forces who fled.

Maliki also called on “all powers — political, financial and popular” — to help the government, raising concerns that he plans to further mobilize the Shiite militias that are reported to be helping beleaguered government forces in the battle against Sunni insurgents in the western province of Anbar. Those militias also played a key role in accelerating the country’s civil war from 2005 to 2007, raising fears that this latest insurgent victory will serve to further exacerbate the sectarian divide.

“Maliki calling on people to arm themselves to fight al-Qaeda is a real indictment of his own security policy and also an invitation for more chaos,” said Zaid al-Ali, an Iraq scholar and the author of a recent book on the challenges confronting Iraq.

The loss of Mosul is also an indictment of the efficiency of the Iraqi security forces, he said.

“There’s a lot of infiltration, a lack of training, a lack of motivation and a significant level of corruption,” he said.

The Tigris River divides Mosul into mostly Kurdish and mostly Sunni Arab neighborhoods, and it is the Sunni areas that ISIS has seized. Mosul has long served as a significant source of funding for ISIS, which has routinely extorted businessmen on both sides of the city for contributions since well before the U.S. departure.

At least some of the soldiers serving on the Sunni side of the city may have been infiltrated by ISIS, explaining why they did not present an effective challenge to the militants, said Aymenn Jawad Al-Tamimi, who monitors jihadist activity for the Middle East Forum. More seriously, however, the Iraqi security forces have consistently failed to win the support of the people they serve, giving them little backing in local communities.

“Tactically and militarily, they are ineffectual,” Tamimi said. “It’s not a lack of manpower. But they haven’t built up local support that would enable them to fight.”