Let’s debate secularism, not rubbish it – by Hasan Suroor 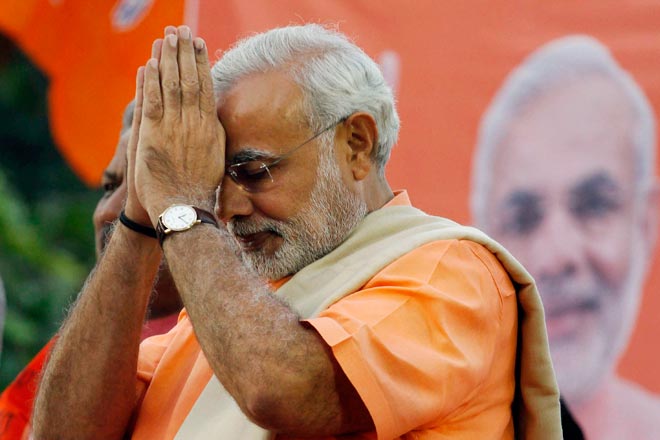 Now that the election dust has settled, it is perhaps a good time to have a sensible debate on secularism, especially around claims that it is an oddity in a deeply religious society such as India; and, even worse, a political trick to “privilege” minorities in exchange for their votes.

Thanks to relentless propaganda, a view that was once confined to the religious right (not to be confused with religiosity or genuine believers) has now started to creep in even into the liberal intellectual discourse. When the chips are down and morale is low it is easy to slip into a sort of Stockholm syndrome and start sympathising with the opponent’s viewpoint. The election results, hailed in certain circles as a victory for Hindu nationalism over “pseudo secularism,” appear to be having the same effect on some liberal voices.

There is a mood of despondency and defeatism as reflected in the distinguished social scientist Shiv Visvanathan’s critique in this paper recently. Explaining “How Modi defeated liberals like me,” (May 22, 2014), he approvingly quoted a colleague who told him, “You English speaking secularists have been utterly coercive, making the majority feel ashamed of what was natural.”

“The Left intellectuals and their liberal siblings behaved as a club, snobbish about secularism, treating religion not as a way of life but as a superstition … By overemphasising secularism, they created an empty domain, a coercive milieu where ordinary people practising religion were seen as lesser orders of being,” he continued. Narendra Modi, he argued, “turned the tables by showing secularism …was a hypocrisy, or was becoming a staged unfairness which treated minority violations as superior to majoritarian prejudices.”

Such an analysis, fairly widely prevalent in some liberal quarters, is flawed at many levels starting with the dig at “English speaking secularists.” The notion that a tiny, English speaking elite is trying to impose western values on hapless “natives” is not only factually incorrect, but also an insult to millions of ordinary Indians who are instinctively secular irrespective of their social/linguistic or educational backgrounds.

Language has nothing to do with one’s cultural beliefs. There are as many, if not more, Hindi/Urdu/Punjabi/Tamil/Malayalam/Telugu/Bengali-speaking people who are as secular as their English speaking peers. By the way, some of Mr. Modi’s staunchest supporters belong to the upwardly mobile English-speaking elite. What does that say about Hindu nationalism?

But there’s a more fundamental flaw in the “secularism-has-failed” theory, and it is the argument that secularism is alien to a society such as India where religion is a part of everyday life. Or that it is an assault on religion and equates religious faith with communalism. It is an old argument which I first heard as a schoolboy growing up in a conservative Muslim neighbourhood in Delhi. Muslims did not want to vote for the Left because they said that in the garb of secularism it wanted to bring in communist-style atheism. Yet, the mullahs had no compunction doing deals with the Congress in the name of secularism. It’s this kind of wheeling and dealing whereby the Congress rewarded certain community members with leadership roles and other perks in return for votes that corrupted secularism. It’s just as well that this nexus has been exposed. Secularism will be the better for it.

The fact is that the Indian brand of secularism never discouraged religiosity or the celebration of religion. Not even in communist-ruled States like West Bengal and Kerala where secularism happily coexisted with religious beliefs and indeed their celebration. If anything, the Indian state has been guilty of “doing” too much religion and promoting a culture of competitive religiosity. India must be the only secular country in the world to have so many religious holidays. Its political leaders (from the President down), celebrities and the media all openly celebrate religious festivals and there are more places of worship in the country than worshippers.

In which other country will you find main thoroughfares closed for hours because one religious group or the other is taking out a procession? Religion is so much in one’s face in India that it is impossible to escape it. Does it remotely seem like a country where people feel “ashamed” or “embarrassed” about their religion?

Another fallacious argument is that, somehow, secularism legitimised minority communalism or, in Prof Visvanathan’s words, “treated minority violations as superior to majoritarian prejudices.”

All over the world, the behaviour of the dominant group is invariably under greater scrutiny than that of smaller groups. Thus, in the West while white racism is always in the news, non-white racism doesn’t get the same attention. In Britain for example, Dalits have been complaining for years about discrimination at the hands of high-caste Hindus but it is only recently that the government has woken up to it. The issue was ignored all these years because it related to an ethnic minority group. None of this of course justifies any soft-pedalling of minority communalism. I have always been as critical of Muslim communalism as of anti-Muslim Hindu prejudices.

Admittedly, there is a lot that has gone wrong with secularism in India, and nothing illustrates it better than the fact that even minorities, especially Muslims, are deeply disillusioned and see themselves as its victims. The ignominy they heaped on the Congress and its secular allies reflects the depth of their anger. But is this a valid basis for saying that secularism doesn’t suit India, and dismissing it as an elitist conspiracy against religion? To do that will be to succumb to right-wing triumphalists to whom secularism has always been an anathema.

All that has happened is that a certain kind of secular politics has been rejected and it will be wrong to deduce from this that the idea of secular India itself has been rejected. Yet, this is how it is being interpreted. There’s a lot of chest-beating going on with some liberals effectively raising the white flag as if conceding that their idea of a secular, multicultural and inclusive India deserved to be defeated by Mr. Modi’s alternative — supposedly superior — vision. And this when we don’t have a clue as to what his idea of India is beyond fuzzy claims of “genuine” secularism.

In effect, this amounts to unquestionably accepting what Hindu nationalists have been saying all these years — namely, that secularism is a liberal plot to appease minorities and build up a minority vote bank. For well-intentioned secularists to echo this argument sounds sadly like negating the values which inspired the post-independence national consensus around the so-called Nehruvian idea of India.

No doubt, honest self-introspection is important and there needs to be a serious debate over the causes of the punishing backlash that the liberal/secular establishment has suffered in the election. But we can do without self-flagellation.

I am reminded of what the progressive Urdu poet Asrar-ul-Haque Majaz wrote while reflecting on his rather chaotic personal life and the failures he endured. In one of his most memorable poems, he vowed never to succumb to defeatism saying, “Ba-een sail-e-gham-o-sail-e-hawadis; mera sar hai ki ab bhi kham nahin hai” (despite all the setbacks my head remains unbent).

If Majaz were alive today, he would have had something sharp to say about the pessimistic tone of the current liberal mood marked by cringing mea culpas and sighs of despair verging almost on throwing in the towel. By all means let’s debate where we went wrong and learn from the mistakes that have been made and abuses that have been committed in the name of secularism. But, in Majaz’s words, beware of defeatism.