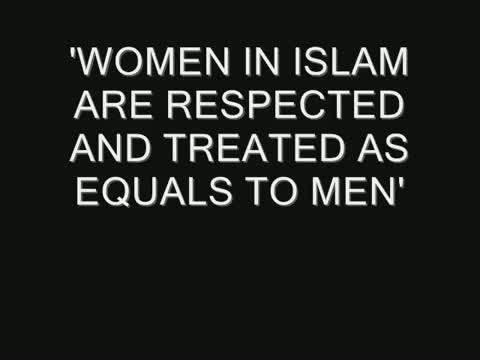 Completely exhausted with consecutive 12 hours-a-day duty for ten days, yesterday I asked my elder brother to hang out lately. Fortunately, one of our mutual friends showed up in the evening at my hospital and we decided to watch the new release “300 – Rise of an empire”. The Eye-popping 3D effects, stunning actions, inspiring dialogues and sensational war-skills made my night! While returning from the cinema I inquired my two companions about their opinion. My brother’s view was more or less similar to mine but surprisingly our mutual friend negated. I was totally stunned when he justified his opinion with these words, “I don’t like movies in which ‘women’ are given lead role or stories in which ‘women’ have lead men!”

Unfortunately, our friend belongs to a tribe or community where women are not as much independent as our religion has ordered. I have read a lot about Muslim women leading from the front throughout the Islamic history, hence I decided to counter his belief with pen.

Notable Muslim women throughout the history have contributed to civilization as rulers, scholars, legal jurists, businesswomen and poets among endless positions.

I would like to begin with the women who were present at the time of Our PROPHET (p.b.u.h), especially his household. Ummahatul Momineen (the Noble Mothers of Muslim Ummah) have contributed a lot. Hazrat Khadija binte Khuwaylid, first wife of our Prophet, was a wealthy businesswoman and a trader who supported Our Prophet morally and financially during his prophecy. Hazrat Ayesha binte Abi Bakar, considered to be the most beloved wife of our Prophet after Hazrat Khadija, not only became a scholar and jurist but also lead a war against Hazrat Ali on a camel (the battle of Camel). Hazrat Umme Salmah, another wife of our Prophet was his political advisor. Our Prophet loved his daughter Hazrat Fatema so much so that he used to stand up in her welcome whenever she showed up.
There is one great lady-warrior in Muslim history, Nusaibah ibne Ka’ab. Initially, her role in the battle of Uhud was just as a war nurse, but after the Muslim archers began deserting their high ground believing victory was at hand, the tide of the battle changed. At this moment Nusaibah entered the battle, carrying a sword and a shield. She defended our Prophet heroically. Her twelfth wound left her unconscious on the battlefield and when she awoke after the battle, her first enquiry was whether MUHAMMAD had survived.

Role of women continued even after the departure of MUHAMMAD.

Ashifa Binte Abdullah was the first Muslim woman to be appointed by Caliph Umar Ibne Khitab as a market inspector and manager.

After the massacre of Karbala, Hazrat Zainab Ibne Ali, became the flag bearer of the ruined Hussaini tribe and spoke bravely and courageously infront of the enemy, Yazid Ibne Muawiya, in the palace of Syria.

Amra Binte Abdur Rehman was a jurist, a mufti(one who gives legal opinions) and a hadith scholar in the time of Ummayad Caliph Umar Ibn Abdul Aziz, who encouraged Muslims to learn with her.

Sayyeda Nafisah, the Prohet’s great granddaughter, daughter of Imam Hasan Ibne Ali, was a teacher of Islamic Jurisprudence whose students travelled from faraway places to learn with her. One of her students was IMAM SHAFA’II, another great founder of Sharia (School of Law). She actually financially supported him as well.
These are the few examples of the earliest years of Islam. There are many other examples that followed the steps of these great ladies in the later years. And it is evident from these names and their events that the true men of Islam (including Our Prophet and Imams) appreciated and encouraged the work of women.

Men and Women are made equal by our God. If u don’t treat them equally then you are in big trouble. Therefore, before listening to your bearded preacher at a Mosque read the Islamic history and respect the ladies!