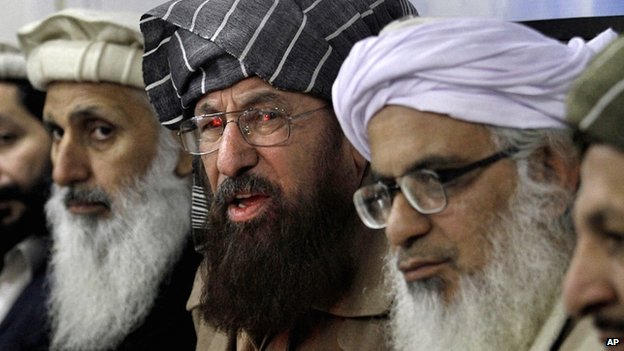 The following excerpt is taken from Aoun Sahi article “Sharia bandwagon” which was published in The News on Sunday (TNS) on 16 Feb 2014.

Maulana Samiul Haq, head of the TTP nominated negotiating team, has stated categorically that Taliban are demanding the enforcement of Sharia in the country. And he, like Aziz and his TTP, follows the same Deobandi school of thought.

The TTP spokesperson, Shahidullah Shahid went a step ahead during an interview on February 11, 2014 to explain the kind of Sharia his organisation is pressing for in Pakistan. He said the Pakistan government’s demand to keep the talks within the parameters of the Pakistan constitution is a pre-condition for peace talks when both sides had agreed not to impose preconditions. “The majority of Pakistanis are Sunni Hanafis — their’s is the best system and no one should oppose it. Non-Muslims need not fear Sharia as Islam protects the rights of minorities,” he said.

In the same interview, he has suggested the name of Mullah Omar as the Amir-ul-Momineen and Mullah Fazlullah having “all the qualities to lead the Pakistani nation”.

But a majority of Pakistan population belongs to the Barelvi school of thought that like Deobandis follows Fiqh Hanfia. There are serious differences between Deobandis and Barelvis, to an extent that they term each other kafir. Likewise, Shias are considered kafirs, worthy of being killed, by several Sunni religious scholars. The Shia and Sunnis also differ on the Islamic governance system — Shias believe in imamat, Sunnis in khilafat.

But these realities and various interpretations of Islamic state may be rendered useless, totally redundant, as the TTP stands for an interpretation of Sharia that only suits its school of thought and has threatened to suppress all forms of opposition.

Some Barelvi religious scholars disagree with the Taliban interpretation of Sharia. “We do not need Sharia of Taliban which allows killing of religious scholars like Sarfaraz Naeemi, allows attacks on shrines, allows slaughter of innocent people and soldiers,” says Zia Naqshbandi, religious commentator and columnist, adding that this narrative intends to undermine all of the institutions of the state, legislature, executive, judiciary, and military, from 1947 till present.

“Their forefathers were against the establishment of Pakistan and now they want to disband the country in the name of Shariah. It seems the government has decided to implement the Deobandi interpretation of Shariah,” he adds.

A majority of religious scholars from various schools of thoughts agree that it is possible to concur to one definition of Sharia, but with Takfiri thinking getting stronger in Pakistan, it seems unlikely. Take a cursory look at the last six decades, we do not have one definition of ‘Muslim’ that all agree to. This is documented in the Munir Commission report, compiled in 1954, after interviewing scores of leading religious scholars from different sects.