Pakistani-American donor Mehboob Aslam claimed on Saturday that Pakistan Tehreek-e-Insaf cannot ensure provision of justice to the common people when it cannot provide justice to its own worker.

Addressing a press conference at the residence of a PTI’s founder member Akbar Babar, Aslam said Imran Khan was surrounded by opportunists and land grabbers, who were being consulted to run the party affairs while ideological workers had been sidelined.

He said he had worked for the party in the US and had raised funds worth $3 million for the 2008 general elections.

“However, when I visited Pakistan, reviewed the causes of the party’s defeat in the polls and talked with ideological workers, I found that the party had been hijacked by corrupt and bankrupt people, who had been assigned important responsibilities in the party,” he claimed.

He said the money he sent had been used in the intra party elections, while the party tickets were even sold.

He said Imran mistreated him when he went to him to complain against the alleged misappropriation and his minions kicked him out.

The PTI spokesperson rejected the allegations. “The PTI chief met with Aslam Mehboob and his six-member-delegation in spite of the fact that he had been dismissed from the party,” he said. “The party accounts have even undergone a forensic audit but no irregularity was found.” 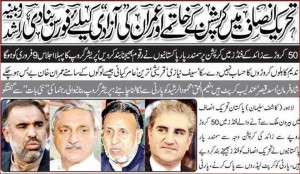