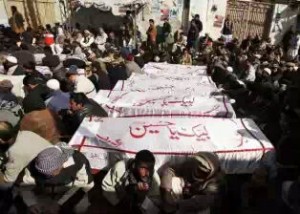 Today, the Hazara graveyard in Quetta will be more crowded than usual as after protesting for more than 36 hours, in this severe weather, with the teary eyes Hazarians will bury their loved ones.

Do you know, during these 36 hours, what chills me to the bones most? The silence, the silence of the Roshan government who didn’t even say a word to console the Hazarians. Don’t know what it was afraid of? May be this was what it was elected for. Elected to remain silent on OUR brutually killing… Elected to remain missing when WE need it… Why only blame the ‘Roshan’ government? Why not blame our so called LEADERS who after the death of Hakeem-ul-Mahsood, a militant who murdered 60K innocent Pakistanis, who was actually a ‘AMAN KI ASHA’ for them, did dharnas for blocking Nato supply and stopping drones? I ask those INKALBI leaders why not a dharna against the brutual killing of my Hazarian brothers and sisters?

When the siblings, Bilawal and Bakhtawar Bhutto Zardari, who are not even the half of age of our LEADERS and who lost their mom due to Terrorism, standing infront of their mother pic with Pakistan flag on their right, holding Rida and Ibtihaj’ pic can raise their voices for Rida, Ibtihaj & all Hazarians. Than why can’t our 60+ leaders, who chant ‘INKALAB AHAY GA’, can do the same? Come on, Inkalbi leaders, qadum berhao, dharna do hum tumharay saht hai! ( Ahhh, I now it’s useless to say this because they will never. Their life is for their Peace brothers not for US. )