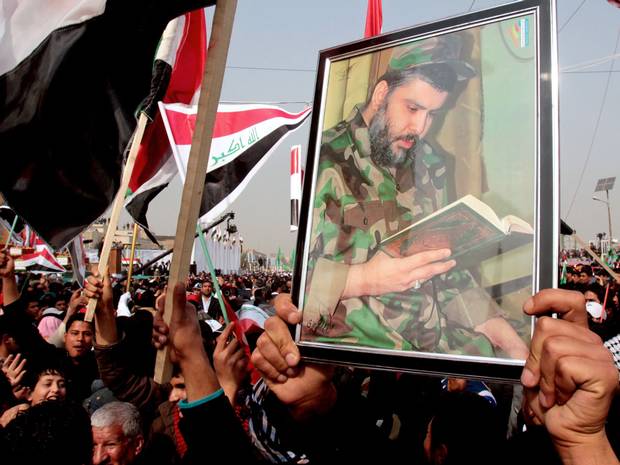 The future of Iraq as a united and independent country is endangered by sectarian Shia-Sunni hostility says Muqtada al-Sadr, the Shia religious leader whose Mehdi Army militia fought the US and British armies and who remains a powerful figure in Iraqi politics. He warns of the danger that “the Iraqi people will disintegrate, its government will disintegrate, and it will be easy for external powers to control the country”.

In an interview with The Independent in the holy city of Najaf, 100 miles south-west of Baghdad – the first interview Mr Sadr has given face-to-face with a Western journalist for almost 10 years – he expressed pessimism about the immediate prospects for Iraq, saying: “The near future is dark.”

Mr Sadr said he is most worried about sectarianism affecting Iraqis at street level, believing that “if it spreads among the people it will be difficult to fight”. He says he believes that standing against sectarianism has made him lose support among his followers.

Mr Sadr’s moderate stance is key at a moment when sectarian strife has been increasing in Iraq – some 200 Shia were killed in the past week alone. For 40 years, Mr Sadr and religious leaders from his family have set the political trend within the Shia community in Iraq. Their long-term resistance to Saddam Hussein and, later, their opposition to the US-led occupation had a crucial impact.

Mr Sadr has remained a leading influence in Iraq after an extraordinary career in which he has often come close to being killed. Several times, it appeared that the political movement he leads, the Sadrist Movement, would be crushed.

He was 25 in 1999 when his father, Mohammed Sadiq al-Sadr, a revered Shia leader, and Mr Sadr’s two brothers were assassinated by Saddam Hussein’s gunmen in Najaf. He just survived sharing a similar fate, remaining under house arrest in Najaf until 2003 when Saddam was overthrown by the US invasion. He and his followers became the most powerful force in many Shia parts of Iraq as enemies of the old regime, but also opposing the occupation. In 2004, his Mehdi Army fought two savage battles against American troops in Najaf, and in Basra it engaged in a prolonged guerrilla war against the British Army which saw the Mehdi Army take control of the city.

The Mehdi Army was seen by the Sunni community as playing a central role in the sectarian murder campaign that reached its height in 2006-7. Mr Sadr says that “people infiltrated the Mehdi Army and carried out these killings”, adding that if his militiamen were involved in the murder of Sunnis he would be the first person to denounce them.

For much of this period, Mr Sadr did not appear to have had full control of forces acting in his name; ultimately he stood them down. At the same time, the Mehdi Army was being driven from its old strongholds in Basra and Sadr City by the US Army and resurgent Iraqi government armed forces. Asked about the status of the Mehdi Army today, Mr Sadr says: “It is still there but it is frozen because the occupation is apparently over. If it comes back, they [the Mehdi Army militiamen] will come back.”

In the past five years, Mr Sadr has rebuilt his movement as one of the main players in Iraqi politics with a programme that is a mixture of Shia religion, populism and Iraqi nationalism. After a strong showing in the general election in 2010, it became part of the present government, with six seats in the cabinet. But Mr Sadr is highly critical of Prime Minister Nouri al-Maliki’s performance during his two terms in office, accusing his administration of being sectarian, corrupt and incompetent.

Speaking of Mr Maliki, with whom his relations are increasingly sour, Mr Sadr said that “maybe he is not the only person responsible for what is happening in Iraq, but he is the person in charge”. Asked if he expected Mr Maliki to continue as Prime Minister, he said: “I expect he is going to run for a third term, but I don’t want him to.”

Mr Sadr said he and other Iraqi leaders had tried to replace him in the past, but Mr Maliki had survived in office because of his support from foreign powers, notably the US and Iran. “What is really surprising is that America and Iran should decide on one person,” he said. “Maliki is strong because he is supported by the United States, Britain and Iran.”

Mr Sadr is particularly critical of the government’s handling of the Sunni minority, which lost power in 2003, implying they had been marginalised and their demands ignored. He thinks that the Iraqi government lost its chance to conciliate Sunni protesters in Iraq who started demonstrating last December, asking for greater civil rights and an end to persecution.

As Mr Sadr sees it, the problem in Iraq is that Iraqis as a whole are traumatised by almost half a century in which there has been a “constant cycle of violence: Saddam, occupation, war after war, first Gulf war, then second Gulf war, then the occupation war, then the resistance – this would lead to a change in the psychology of Iraqis”. He explained that Iraqis make the mistake of trying to solve one problem by creating a worse one, such as getting the Americans to topple Saddam Hussein but then having the problem of the US occupation. He compared Iraqis to “somebody who found a mouse in his house, then he kept a cat, then he wanted to get the cat out of the house so he kept a dog, then to get the dog out of his house he bought an elephant, so he bought a mouse again”.

Asked about the best way for Iraqis to deal with the mouse, Mr Sadr said: “By using neither the cat nor the dog, but instead national unity, rejection of sectarianism, open-mindedness, having open ideas, rejection of extremism.”

A main theme of Mr Sadr’s approach is to bolster Iraq as an independent nation state, able to make decisions in its own interests. Hence his abiding hostility to the American and British occupation, holding this responsible for many of Iraq’s present ills. To this day, neither he nor anybody from his movement will meet American or British officials. But he is equally hostile to intervention by Iran in Iraqi affairs saying: “We refuse all kinds of interventions from external forces, whether such an intervention was in the interests of Iraqis or against their interests. The destiny of Iraqis should be decided by Iraqis themselves.”

This is a change of stance for a man who was once demonised by the US and Britain as a pawn of Iran. The strength of the Sadrist movement under Mr Sadr and his father – and its ability to withstand powerful enemies and shattering defeats – owes much to the fact it that it blends Shia revivalism with social activism and Iraqi nationalism.

Why are Iraqi government members so ineffective and corrupt? Mr Sadr believes that “they compete to take a share of the cake, rather than competing to serve their people”

Asked why the Kurdistan Regional Government had been more successful in terms of security and economic development than the rest of Iraq, Mr Sadr thought there was less stealing and corruption among the Kurds and maybe because “they love their ethnicity and their region”. If the government tried to marginalise them, they might ask for independence: “Mr Massoud Barzani [the KRG President] told me that ‘if Maliki pushes on me harder, we are going to ask for independence’.”