Home  »  Original Articles   »   State Owned Enterprises- What To Do With Them? – by Ali Hashim 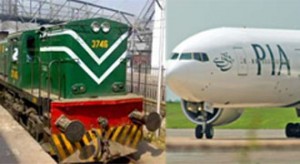 When I hear that the new Government is developing a policy for Management and Restructuring of State Owned Enterprises (SOEs) once again, I am reminded of Einstein’s definition of insanity- “the act of doing something over and over again and expecting a different result”.

The common perception is that if the Government appoints an honest management team and stops interfering in the day to management of SOEs then this will turn things around and the SOEs will become financially viable concerns providing useful goods and services to society.
The problem with this proposition is that these two conditions are well-nigh impossible to meet in Pakistan. The previous fifty years have shown that many efforts to do precisely this have not been successful. Positions of the Chief Executive and those on the Boards of Directors of these enterprises have been used by all governments, both military and political, as plum appointments to reward friends and supporters, and to induct others on the SOE payroll, subverting the normal recruitment process.  I started my management career at Pakistan Steel and am a firsthand witness to this phenomenon.
The whole idea of State owned enterprises was a product of the thinking in the post-World War II era with the State acting as the key economic agent.  SOEs were set up as instruments for the development of manufacturing, the fostering of infant industries and export diversification. It was also widely believed that economic dependency on foreign sources could be eliminated through the establishment of SOEs that would have the size and resources necessary to compete successfully with large multi-national corporations; SOEs were seen as a counterweight to foreign ownership.
This thinking has proved to be flawed, with inefficiency and corruption running rampant in the public sector. The World Bank, in a study estimates that “the fiscal drain of public enterprises, together with the losses of the financial system, can reach 8 to 12 per cent of GDP, two to three times the spending on health care and education”.
The problem is that the only true criterion of success of a commercial enterprise – the bottom line – is never applied strictly. Under one excuse or another, the Government bails these enterprises out once they have run through the previous tranche of investment and have again run up huge losses.  In the private sector they would be closed down the first time around. Thus, SOEs enjoy many of the advantages of the private sector corporations but are not accountable in the same way for their bottom line.
The overall problem of management of SOEs is systemic and cannot be solved in the public sector – in Pakistan at least. In Pakistan, I have not seen any of the many public sector corporations performing efficiently on a sustained basis.  Stories in the press that one or the other of these SOEs have achieved record profits at a given point in time are either inaccurate, with only the marginal operating cost used to calculate profitability,  or fabrications planted by a new management team appointed after a restructuring!
It has been reported recently that Pakistan’s SOEs together run up a huge annual operational deficit of Rs. 500 billion with an additional Rs. 500 billion of annual financial losses. These numbers are consistent with the World Bank study findings mentioned above. This is a serious hemorrhage on our fiscal resources and if we get rid of a major part of this overhang, it could make a serious dent in the fiscal deficit.
The argument that these SOEs provide seriously needed employment opportunities does not stand scrutiny. They do provide employment but at what cost? A simple calculation shows that the annual payroll of all the SOEs in Pakistan put together is one half to one third of the annual subsidy that these enterprises require annually. It would seem to be less costly to just pay these individuals to stay at home and purchase the goods and services they produce from the market!
I think it would appear that the correct course for the government to adopt is that the majority of the State enterprises be privatized as soon as possible.  The SOE sell off should be done even if it appears that we are not getting a fair return for them. We find a lesson for us to follow in the case of Pakistan Steel.  The last attempt to privatize the Steel mill was stopped by the Judiciary. This was a well-intentioned, though ill-advised move. It is possible that the price being offered was below the true market value, but the investment made in the mill to cover the losses since then has more than met the difference.
It will not be useful to make changes at the margin by setting up a new management structure for the SOEs for the reasons outlined above. As they say, when you are in a hole the first thing you need to do is to stop digging!