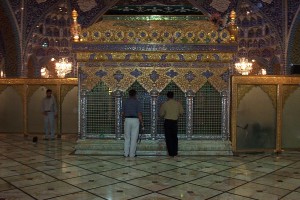 I visited Sakina only once during my trip to Damascus in 2004. The meeting lasted for a few hours and such was the charm that nostalgia haunts my memory to date. I was introduced to her at a very young age, the affiliation grew gradually and I decided to visit her. The reasons were simply her nobility and resilience, which ran in her blood. Her radiance and moral high grounds amalgamates to make her such a larger-than-life personality that I have yet to find/draw any parallels.

I still remember the sunny afternoon in the suburbs of Damascus, thousands of miles away from my home in Pakistan; I went to find out about Sakina’s ordeal. We met at a serene place, a place that denotes peace and tranquillity, and is famous for the same reasons amongst its many visitors. The mood was sombre though. This theme itself simply resonates with history; Sakina has been residing here for centuries, since her tribulations began a long time ago. This is her final resting place, a dungeon where she passed away at a very young age amid solitary confinement and torture.

About 1,400 years ago, she was only four when she witnessed one of the most horrific massacres of human history on the plains of Karbala. Her father Husain, then 58, grandson of Prophet Muhammad (PBUH) was beheaded along with his 72 companions, for standing against a tyrant ruler, Yazid I. Tragically, the perpetrators were the followers of the same prophet. She was taken captive and was forced to travel for 750 miles from Karbala to Damascus along with the severed head of her father on a spear. En route to Damascus, riding on a bare back camel with her arms tied behind and her neck in a rope whenever she cried, she was slapped. Often whipped by the army of Yazid, she defied the cruelty and her bravery in response even as a child, narrated in history, elevated her to one of the most celebrated characters of this arduous journey of 28 days.

Yet more scattered thoughts engulfed me when I visited Al-Hamidiya Sauk, one of the oldest bazaars in the heart of Damascus. I just could not stop visualising this bizarre city through an historical filter when the Umayyads ruled with an iron fist. During that time the cruelties were so much that the captives of Karbala were paraded through the same bazaar and stones were hurled at them. Sakina and her family members had to wait three days, outside this bazaar, in scorching heat to be seen by the king Yazid I.

These events of Karbala and Damascus still serve as a cliché to encapsulate the Shia-Sunni divide amongst the 1.6 billion Muslims spread from China to Chile.

I stayed there for some time and venerated the character of this wonderful child, whose great grandfather was adored by thousands in that era and then there came a time when his progeny was left to be killed and imprisoned. I paid my homage with a heavy heart and headed back to Pakistan.

Nine years gone past, and today Sakina’s adopted home, founded in the 3rd millennium BC, has became a critical juncture between one of the US’s closest allies, Saudi Arabia, and one of its biggest rivals, Iran.

Syria is in turmoil. Since the unrest started more than 29 months ago, thousands have been killed, millions migrated and now even a regional war looms. Damage of this continuing civil war is to an extent that there is not much left to be reduced to debris. Narratives and opinions differ when it comes to a proxy war, al Qaeda’s presence, armed militias, the desecration of the graves of the companions of Prophet Muhammad (PBUH), the grim images of a vicious

cannibal eating human flesh, the fall of the Al-Qusair, killings and beheading of the rivals amid allegations of blasphemy and, most importantly, involvement of the western powers. However, what is more heart wrenching to me, as the events unfold, is that it is apparent that the entire Muslim world is waiting for another victimhood opportunity to embrace.

To me, the west is irrelevant. The efforts made by the US and its ‘coalition of the willing’ are to further establish their own hegemony. It is their prerogative and in the west, the list of those who trade old war with a new one is long. Despite the recent successful negotiations to prolong the inevitable at Geneva, I am in no doubt that the road to get to Tehran will pass through Damascus. However, with no hindsight present, Muslims are at crossroads and no one knows what their destination is.

Arab countries are so excited to applaud the destruction of Damascus that according to Senator John Kerry they have offered to pay the cost of military intervention. I find it aberrant that the Islamists bitterly oppose the western intervention in the Pak-Afghan region, while their cohorts’ supports military strikes in Syria. This dirty paradox of supporting enemy’s enemy gets despicable when the most powerful factions of Syrian rebels, Jabhatul Nussra and ISIS, fighting against Assad regime, are waiting ardently for this support so it can pave its way to the corridors of power in Damascus. Everyone is aware of the fact that the Jabhatul Nussra and ISIS are run by the al Qaeda operatives, and while they are about to enter in a cordial relationship with the West and Arab states, one must wonder, which enemy these ‘coalition partners’ was fighting against since 9/11.

Most importantly, Muslims often blame the west for promoting dichotomy of sectarianism amongst us but they never unleash the secrets within. Sakina’s final resting place, its disposition and her tragic tale warped in piety suggest that the Islamic history is not as glorious as it has been portrayed. Since the early days of Islam, the persecution of a few Muslims has become a bewildering reason of applause for some other Muslims and the practice is continued callously. Why blame the west when our enemy lies within? We just borrow the technical ability from the west to exterminate ourselves and the rest is done through our ideological drivers based upon hate for each other. These drivers have only misdirected us and we must admit that we had been handed out broken compasses a long time ago.

Since there is no one who will finally let Sakina rest in peace, the blessed but scar-borne soul of Sakina awaits tomahawk cruise missiles. In the same magnificent mausoleum, which I visited in the suburbs of Damascus, I realised that her hopes for humanity must have perished 1,400 years ago. So while these missiles will sweep onto one of the mankind’s oldest cities, and will ceremonially topple the Assad’s regime, the war, however, is already over. The battle to conceal, hide and protect the ‘dirty secrets’ within the Muslims continues.

The writer is an IT-Project Manager based in the UK. He can be reached at tehsinzaidi@gmail.com and tweets @secretinstinct